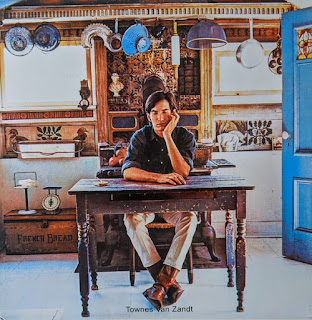 Provenance: This is slightly odd, insofar as a half-remembered post on a music message board percolated away for more than a decade before breaking through into my consciousness.

Back in 2018 my partner was away for a few days, and I was idly lounging around on my bed trying to think of something new to tickle the tympanic membrane with. For some reason, the name 'Townes Van Zandt' floated to the surface, and as we own a couple of those accursed Amazon Echoes, I asked it to play me some of his music.

The only reason I even knew of TVZ was due to a single poster on the forum, who during the mid-2000s would respond to every 'best songwriter', 'most underrated songwriter', 'most overlooked artist', etc., thread with the same answer: Townes Van Zandt. Going purely by a few detail-light posts sandwiched between threads on John Corabi and Bang Tango, I has assumed he was some sub-Neil Young Laurel Canyon folkster.

Ten minutes after commanding my personal surveillance device, I felt like punching myself. I'd heard what sounded like the strangest, most pungent, deep country music I'd ever encountered - the mighty, cinematic double-cross ballad 'Pancho and Lefty', the harrowing 'Waitin' Around To Die' and one of the most singular compositions ever, the ominous, apocalyptic two-chord blues 'Lungs'. I bought this album, which features the latter two, and The Late Great Townes Van Zandt, almost immediately.

Review: I like discussions about great songwriters - in fact, just last night my father-in-law and I were marvelling together at the prodigious output (and success) of the Brill Building stable of the 1960s and 1970s. A few nights previous, I was advancing to a group of friends that Ray Davies of the Kinks has to be considered in the same bracket as Lennon and McCartney, at least where British performers are concerned. There's no real answer, obviously, because what are you looking for in a song? Beautiful music? Storytelling? Mood creation? Nonetheless, if I were to put together a Mount Rushmore of American songwriters, Townes Van Zandt would be my first nomination.

Here, on his third album, is the most consistent and cohesive collection that TVZ put out in his career. For the most part it's three- or four-chord country music, with acoustic guitar to the fore, songs driven by Van Zandt's deceptively complex fingerpicking and swooning, keening Texan drawl. Although it's absolutely the kind of album to inspire me to dribble out inanities like 'timeless', there are signs of an era; hand drums on 'For the Sake of the Song' and a harpsichord to back that and subsequent track, the pure romance of 'Columbine', mark it as a product of the late 1960s.

These two are perfectly good compositions and would be standouts on any other singer-songwriter collection, but it's on 'Waitin' Around To Die' where things get interesting; an itchy, nervy drum tattoo and tubercular harmonica underscore a tale of almost grotesque woe, taking in abandonment, infidelity, criminality and drug dependence. Reflecting some of the bummer endings creeping into popular cinema at the time, this doozy ends on one of the grimmer twists in country.

What's abundantly clear is that Townes Van Zandt is a testimony of an artist fully in command of his talent and his craft. In any other hands, 'Colorado Girl' would be pedestrian, perhaps even a little goofy. However, TVZ's ability to imbue his simple, homespun poetry with untold depths of feeling make this remarkable. When he steps outside his established metre to deliver the line "I got to kiss these lonesome Texas blues goodbye" it just about breaks your heart. If you're missing somebody in your life right now, perhaps save this one for later. A few tracks later, he's back to making you feel like utter dogshit again on the tender, consolatory 'I'll Be Here in the Morning'.

Betwixt and between moments where he's duffing your into an emotional wreck, something else remarkable happens - the ominous, hallucinatory 'Lungs', apparently written whilst in an illness induced delirium. Crossing the imagery of the Book of Revelations with the haunted Texas blues of Blind Lemon Jefferson, 'Lungs' feels like an entire dread universe has been called into being in the span of two and a half minutes. As mentioned previously, it's a whole two chords, with a needling guitar riff and some gunslinger slide playing added in to spice the recipe, but that doesn't tell half the story. Above it all is TVZ sounding both fearful and mighty, as if he knows the spell he is weaving possesses a rare and unpredictable power. Lightning in a bottle.

In just ten songs, and less than thirty-five minutes, Townes Van Zandt manages to do something peculiar. The palette of sounds Van Zandt works with is not particularly diverse, and nor does he ever demonstrate much vocal range (albeit, the singing is gorgeous). Nonetheless, this album takes in the ache of romance, existential horror, teary-eyed wistfulness and the depths of insanity. Both 'Lungs' and, say, the delicate country waltz of '(Quicksilver Dreams Of) Maria' are indelibly TVZ songs, yet in terms of sensibility couldn't be any further apart. This is one of the many reasons why I feel Townes Van Zandt ranks right up there: it's not just brilliant, it's also substantial, and maybe even important.