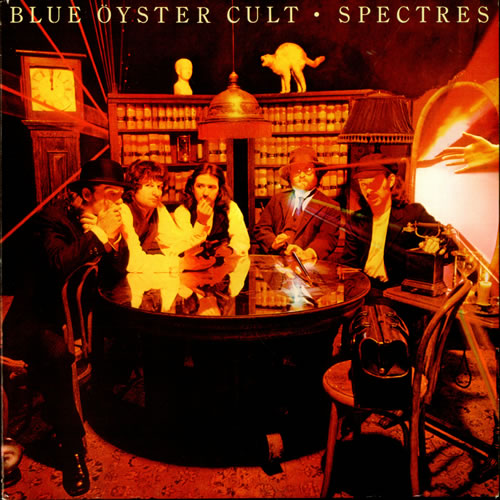 Provenance: I'd heard '(Don't Fear) The Reaper' on a rock compilation my dad bought and instantly declared it to be the best song ever written. So when I came across this in a secondhand shop for a fiver I had to buy it.

Review: Between the ages of about 15 to somewhere in my mid-twenties, Blue Oyster Cult were my life. I've seen them more than any other act. I have all their albums. I even interviewed bassist Joe Bouchard for my school newspaper. Between BOC, Championship Manager and active membership of an eFed, that I even so much as kissed a member of the opposite sex during this period is incredible.

The catalyst of '...Reaper' aside, this is where it all began for me. I am a callow youth with ten whole pounds to spend when I spy this in the racks. By this point it is already established that these hombres are responsible for the greatest song of all time. The album cover confirms my initial suspicion that BOC are the baddest band on the planet. There they are, hanging out in some weird badly-lit occult library, dressed to the nines and looking nonchalant because they're always holding cool seances and pissing off the cat with manifestations of ectoplasm and the like. The sleeve artwork alone should've guaranteed platinum status.

Now, some critics think Spectres is where BOC started the nosedive into generic pop-rock pabulum, one that would only be arrested momentarily by Fire of Unknown Origin. Some locate the tipping point as side two of Agents of Fortune. As a fan I completely understand, and objectively I might consider the first four studio discs to be the band's best output. But Spectres was special - like a first beer, or the first time you win promotion to Division One with AFC Bournemouth on Championship Manager 2. How do you go about explaining that magic?

Fortunately, the album kicks off with a true Cult classic - 'Godzilla', a song so potent that I was once assaulted on stage for playing the solo like a complete badass. If you're looking for the skittery, twisted mysticism of earlier BOC then look elsewhere - this had a big, dumb riff, lyrics about the scaly rogue terrorising downtown Tokyo and a Japanese spoken word section that I always had to do because nobody else in my band could remember how it went. Racer X do a splendid cover. It's difficult to resist a chorus hook that goes 'Oh no! There goes Tokyo!'

Other highlights, in order(ish): BOC were never much of a 'ballad' kind of band (and often not great when they gave them a shot) but 'Death Valley Nights' is up there as one of my favourite tracks they ever did. 'Golden Age of Leather' features buzzsaw guitars and a male voice choir to kick off proceedings. Meanwhile, the lilting arpeggios of 'Fireworks' propel the song towards one of Buck Dharma's best solos; I believe Jason Newsted said Dharma's playing was "like hot needles in your ears", which is brilliant but doesn't quite capture the agility and fluency that made his playing so distinctive.

Side two contains 'Celestial The Queen', which sounds like a Blue Oyster Cult / Electric Light Orchestra mash-up, and yet another decent ballad(!!) in 'I Love The Night', a stately attempt at ethereality which mostly comes off. My favourite moment comes in the form of the schlocky vampire yarn 'Nosferatu'; I find it hard to dislike any song that begins with the line 'Deep in the heart of Germany, Lucy clutched her breast in fear'. Canny stuff.

If I allow myself some critical distance, this is the album where the filler creeps in. The cod funk of 'Searchin' For Celine' never gripped me despite its clever lyrical allusions whilst 'Goin' Through The Motions' is a good example of nominative determinism. I've heard other fans slating the Capek-inspired 'R U Ready 2 Rock' as a bit one-note and generic but it's really grown on me over the years. Plus the title is indisputable proof that Prince, like all good people, was a huge fan of 'the Cult'.

Compared to other analyses, I'm only landing glancing blows. There are fans out there who truly count Spectres as a disappointment, or even a betrayal to BOC's roots. I could never be so hard on an album I've listened to countless times, one that set me off on a journey to fandom (and beyond) and most importantly, one that unfailingly evokes the most pleasurable of memories.
Posted by AC at 14:57 No comments:

Balls To The Wall - Accept

Provenance: Bought this in preparation for an Udo Dirkschneider gig in May 2016, which was billed as his last time ever singing Accept material (beard on).

Review: I have a lingering affection for Germany, having spent some considerable time there in the early years of this century. Most of it was spent in Berlin. Waking up each morning I would turn on the radio, tuned to Spree FM, and waited for my morning dose of Depeche Mode. I was rarely disappointed. If the Basildon gloomsters failed to make an appearance I could always look forward to Phil Collins, such was the predictability of Spree FM.

I spun the dial this way and that in search of something with a bit more welly. No cigar. Germany has a strong rock and metal heritage but it seemed, at least in those days, that nobody was willing to give it an airing on the airwaves. Speaking to people, you got the impression that German rock was a bit of an embarrassment. Rammstein had a certain amount of cultural capital, but any mention of the Scorpions was likely to elicit a wry chuckle and a flippant remark about 'Winds of Change'. Fair enough, it's a shit song alright, but the Scorps had some great material and remain to this day a solid live act. Nobody knew who Accept were.

What a shame. During the 1980s Accept released a trilogy of brilliant albums, of which Balls To The Wall ranks at the forefront. I'll go one further as to say it was one of the best metal albums of the entire decade, by any band. Accept took the hard-driving metal template and twisted it around eminently hummable choruses. The production is crisp. It doesn't hurt that the title track is a true metal classic.

In addition, Accept had a secret weapon - vocalist Udo Dirkschneider. Along with Halford, Dio and Dickinson he was one of the decade's most distinctive singers, which is just as well as he w.as a strange looking character. Here he is wearing his Action Man pyjamas, demonstrating just why he was so important to the overall Accept sound. That razored larynx, permanently pitched between a snarl and a scream, gives the album an added element of aggression and helps to elevate Accept's primo output to the top tier of metal.

Dirkschneider's lacerating vocal style is first heard in the chorus to 'Balls To The Wall', a wonderful mid-paced prowler with a huge intro riff and numerous screech-along moments. 'London Leatherboys' sounds like Killing Machine era Judas Priest, it's fist-pump chorus simultaneously preposterous and irresistible. Elsewhere, 'Love Child' is a lacerating head-rush (and one of the few metal songs of the age to tackle the issue of sexuality) whilst 'Winter Dreams' is a stately, strangely affecting conclusion to the album that transports the listener to Udo's own personal alpine fantasyland.

Yet it's an inescapable fact that this album is also pretty funny, due in no small part to the less-than-fluent English deployed throughout. Commercial realities meant that Accept needed to sing in English if they were to entertain any notion of success outside of their home territory. One of my favourite lines in the entirety of recorded music occurs early on, when Dirkschneider mutters "let's plug a bomb in everyone's ass. 'London Leatherboys' is a hot cut fresh from the Tower of Babel, its title alone veering dangerously into Tobias Funke territory. 'Head Over Heels' manage to sound both incomprehensible and perverse at the same time.

What the fuck, though. I couldn't write a song in German. It's all rather churlish to make fun when the music is so bloody excellent. I had the good fortune of seeing Udo Dirkschneider in London this year playing Accept songs for the final time (or so he says). That a large swathe of Balls To The Wall got an airing is testament to the popularity and durability of this release. When his band played 'Balls To The Wall' the crowd went nuts. I went nuts. An essential part of any serious metaller's collection.
Posted by AC at 11:07 No comments: