Provenance: I know more about the state of Kansas than I do about the band (who hail from Topeka, KS, a fine city folks), due not in no small part because it's where my partner comes from. We got married in Kansas and, by God, I shall die in Kansas (note: I live in the south-east of England so I haven't quite thought through the logistics of this latter claim).

However, long before I had any kind of association with Kansas the place, I was into Kansas the band. More precisely, I was into Leftoverture, and even then I would say no more than two-thirds of the album. I could never really bring myself to sit through all six 'movements' of 'Magnum Opus'. I bought a Russian import of Leftoverture from a secondhand shop in Bournemouth for about a fiver.

Before I go on, I really want to point out that despite my frequent digs at the place I really do hold a lot of affection for Kansas. From the First Nations peoples of the region and Coronado's 16th century expedition to find the Seven Cities of Gold, to Bleeding Kansas through to the great cattle drives of Wild West mythology, it really is a fascinating place - and that's before you even get to its natural history. You've still got mass graves from the Oregon Trail and innumerable ghost towns, plus some cool places like Lawrence, Manhattan, Abilene and Dodge City. Rather than the usual sun-sodden vacation spots or overhyped cities, why not give Kansas (or the Midwest in general) a go?

Review: Yes! If Kansas got nothing else correct, they damn well knew that frontloading Leftoverture with 'Carry On Wayward Son' was an absolute pro move. A song like 'Carry On Wayward Son' swings for the fences on all kinds of fronts. Even the a capella intro, something I tend to dislike, sounds great. From there it's a real Nantucket Sleighride of a track, pulling you through riff-rock, gentle piano balladry and a warped kind of Midwestern boogie-prog. It should be a hot mess, but it isn't.

One of the textures that distinguished Kansas' brand of pomp-rock from their competitors was the prominent use of violin in the mix. Nowhere is this better exemplified in 'The Wall', soaring and bombastic, underpinned by a lyric describing one man's search for inner tranquility. This becomes more interesting when you replace 'one man' with 'Kerry Livgren', Kansas' guitarist and main songwriter. Listening to many of the other songs - 'Carry On Wayward Son', the hard-driving 'What's On My Mind', the epic 'Miracles Out of Nowhere' (all of which was side one, basically) - and you're left with the impression of a man at a crossroads. Someone who's had his fill of what the world has to offer and is turning inward for succour.

Yes, my friends, I think we've found yet another hidden Christian rock album.

Three years after Leftoverture was released, Kerry Livgren became an evangelical Christian. It was a move that would eventually lead him to quit Kansas and release actual Christian rock. Betwixt and between, he also flirted with a rather bizarre niche of Judeo-Christianity codified in a gargantuan work called The Urantia Book, all of which mirrors the unsettled mind wrestling with notions of truth and uncertainty during the first half of Leftoverture. The subtlety employed here has to be commended, as each song taken individually doesn't give a clear picture; but taken as a whole, side one is a fairly obvious delineation of introspection and the struggle of a dawning spirituality, one that would lead him to leave Kansas and secular rock music behind (spoiler: he came back).

Unfortunately, past about 'Questions of My Childhood', two-thirds of the way through, Leftoverture runs out of steam a bit. Although Kansas have a keen ear for melody and some chewy, inventive musical ideas they're simply not an out-and-out progressive rock band. They simply lack the nimbleness and light-touch of a band like Yes. As such, 'Magnum Opus', a six part - count 'em! - suite of rockaria tries its best to gather speed but never quite leaves terra firma. There's a couple of cute ideas hidden amongst the weeds that surely could've been developed into fuller compositions. What possibly seemed like a questing and adventurous format actually ends up strangling all the clever bits in the crib.

Nevertheless, Leftoverture can be considered one of the good'uns, and side one is up there as a high-point in the pomp rock annals. Plus, in the fingerpicked guitar in 'Miracles Out of Nowhere', you can hear the blueprint of what would become 'Dust In the Wind', Kansas' most famous composition. As Coronado once concluded, four hundred and fifty years ago, Kansas are well worth exploring.
Posted by AC at 09:51 No comments: 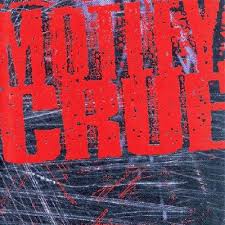 Review: Where does one start with this curio? Perhaps a little context would be helpful.

Until about 1993, US MTV viewers had to put up with a lot of hairspray and decadence. Motley Crue (I'm not bothering with the umlaut, guys), bolstered by albums such as Shout at the Devil, Theatre of Pain and Dr Feelgood, were one of the earliest and most successful acts from the glam era. They were rich, famous and cool - and then grunge happened.

Unlike the fabled Punk Year Zero that supposedly reset the clock in the UK (lol, no, Genesis still sold bucketloads in the wake of Lydon, Strummer et al), the rise of alt-rock in the US genuinely swept away the spandex brigade almost wholesale. A few of the big boys endured - Guns N Roses were dangerous and credible, Bon Jovi erred close enough to blue-collar likeability - but some, like Motley Crue, didn't. That's not to say that sales entirely dried up, but suddenly they and their peers were chasing a zeitgeist rather than creating one. Bands scrambled to appear hip to the new scene, with Warrant, KISS and Def Leppard all coming out with albums that strove to appear edgier. What it did was make them look desperate. And thus we have Motley Crue, erstwhile-hair farmers reinvented as 1994 alt-metal tyros.

The most immediate difference to that which came before are the vocals - and it's an improvement. I have never been the biggest Motley Crue fan due in large part to Vince Neil's unappealing hooting and yelping. Given the direction the band took here, had he not left in 1992 Neil would've been frankly floundering. John Corabi's grittier, more soulful delivery is a good fit for a collection of tracks that is more mid-paced and downbeat than anything Crue had hitherto deigned to release.

However - the big problem here is that the whole album feels like an exercise in pastiche, as if someone had tasked a competent band to produce an ersatz version of what was lighting up the charts at the time. 'Power to the Music', the opener, is the sound of a group that grasps what's happening at surface level without any deeper level of understanding, and it's frankly laughable to hear good-time hedonists Motley Crue suddenly develop an urge to tackle paedophilia ('Uncle Jack'). That's some dark fucking shit bro!

The missteps continue. In the space of three songs they've used that modish compressed voice effect you hear on Soundgarden's 'Spoonman" (also 1994) twice, although in the second instance it feels less egregious because 'Hooligan's Holiday' is a legitimately fun track, sounding like something that could've adorned Skid Row's Slave to the Grind (which is a compliment, trust me). It mixes tempos and dynamics nicely, a punchy head-nodder that overcomes its ridiculous lyrical content with ease. Meanwhile, 'Misunderstood' threatens to actually lift proceedings through a change of pace and a welcome injection of subtlety. It starts off like the kind of woozy, dreamy ballad that Aerosmith could do and Corabi even sounds like Steve Tyler for the first half of the song. Sadly, as with everything else on Motley Crue any hint of a good idea is bludgeoned to oblivion, in this instance by kicking it up into generic heavy 'rawk'. About the only time Crue break outside of the cage is 'Loveshine', which sounds appealingly like a Tesla ballad. It's light and breezy, and over in two and a half minutes on an album that clocks in at over an hour in run time.

There's one more highlight to come - 'Poison Apples', which sounds like a bouncy, slick Quireboys boogie, albeit with the chorus to the Manic Street Preachers' 'You Love Us' (yes, really) grafted on top. But I like that song, and I like the Quireboys, so it's a winner for me. It's the last time Crue keep things relatively carefree; from then on, signores Mars, Lee and Sixx furrow their brows and do theur best to appear pissed off with the world. And it's boring! It's fucking boring! And that's the biggest sin of all. Motley Crue can be many things - frothy, boneheaded, insubstantial, idiotic, annoying - but not dull. Yet here I am, anxiously awaiting the little zip noise that signals that the CD is over. 'Til Death Do Us Part', 'Welcome to the Numb' (really?), 'Smoke the Sky', 'Droppin' Like Flies', 'Driftaway' - all the different shades of shit are represented here. Call it what you will - a crawl, a plod, a drag - but the last twenty-five minutes of this already flawed attempt at relevance are awful, a purgatory that not even hair metal fans should be subjected to.

It's got its defenders. It's got those who think that it should've been released under a name other than Motley Crue (one I'm sympathetic with). Largely, though, it's got those who saw it on the shelves or caught 'Hooligan's Holiday' on MTV and responded with a collective shrug. I have now listened to Motley Crue twice over the course of two days, hoping that spending a little quality time with the album would reveal its hidden charms to me. That didn't happen. Ultimately I ended up not giving a pig's eye one way or the other. Welcome to the numb, I guess.
Posted by AC at 05:52 No comments: