Over The Top - White Wizzard 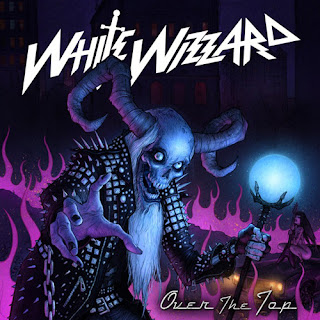 Provenance: Another one bought solely due to a rave review in Classic Rock magazine.

Review: I feel like you're off to a good start if the figure of a leather-'n'-studs clad goat/skeleton/demon hybrid adorns the front cover of your album. No matter how much the actual music stinks, that's a statement of intent I can get behind. Plus the dude looks like he's enjoying himself, and I want to enjoy the White Wizzard experience too.

I feel like calling your album Over The Top is a smart move too, not only invoking a quality Motorhead track but also promising an embarrassment of headbanging riches. When compared with most other genres, heavy metal stands out due to its excesses - the extremes of speed and volume, the flamboyance of costumery, guitar solos spilling over into the realms of the ridiculous - so it feels as if the Wizzard are consciously tapping into that tradition of 'more is more'. Well, I had my fill of intimate minimalism last week - time for some all-guns blazing metal mayhem! Or so I hope...

I don't know what I was worried - the singer's name is Wyatt 'Screaming Demon' Anderson, fercrissake. About four different people are credited with taking lead guitar spots at various times. The songs have names like 'Iron Goddess of Vengeance', 'Strike of the Viper' and 'Death Race'. All of which, really, is a lot of shilly-shallying about to say that Over The Top properly whips ass.

I didn't know that the world needed tributes to Grim Reaper or Malice, but thanks to White Wizzard we've got them anyway. This album is the sound of people locked in a prison cell for ten years with only those aforementioned bands, the first three Iron Maiden albums and a smattering of Angelwitch, Riot, Dio and Tygers of Pan Tang to keep them company as their minds slowly sloughed off any and all residual notions of the 21st century. On Over The Top it is permanently 1983, everyone lives at Castle Donnington and the only materials available to mankind are denim, leather and chrome.

Which, by the way, sounds fucking sweet.

But of what experience do these minstrels hymn? Well, there's your demons of course, plus paeans to heavy metal (after rap, possibly the most self-reflexive genre?), the devil himself, travelling at high speeds, lightning, iron and a whole mess of fire (mostly rhyming the latter with 'desire', natch). More than once, the names of iconic metal tracks are tossed in there, such as the reference to Black Sabbath's 'Neon Knights' in 'Live Free Or Die', and the winking nod to 'Ride the Lightning' in 'Iron Goddess of Vengeance'. I see nothing cynical in this, nor any other endeavour on Over The Top. Rather, these guys just love classic metal, and take every available moment to celebrate the fact.

When I was at school, my Latin teacher (yes, yes...) once remarked that the great poets would pepper their works with allusions to myth and history as a way of flattering their patrons. If you were refined enough to spot them, you were 'in with the in crowd' as Bryan Ferry once crooned. I am choosing to also acknowledge each and every glimpse of Rainbow and Judas Priest in Over The Top in much the same way, greeting each one with a crinkling of the eyes and a knowing, beneficent smile. No, I am not reclining in my triclinium eating sparrow hearts and guzzling down garum like nobody's business, but I do have a pack of Maltesers and a Diet Coke, so the resonances can be felt, for sure.

Finally, I know that production is something I harp on about, but my poor sensitive ears have been assailed by too much mush in their time. You know what I mean - "quiet" songs that are never quiet, zero dynamics, clipping (one of the reasons I haven't reviewed Rush's Vapor Trails yet is that I don't want a headache); happily, this bad boy doesn't suffer from any of that. Firstly, there are no quiet songs - White Wizzard come hot out of the traps and don't let up, which is a-okay in my book. Secondly, in keeping with their fealty to the era of NWOBHM, I can actually hear separation in the voices and instruments! Yeah, it's loud and there's a touch of modern compression applied to the sound, but otherwise it's a pleasingly comforting old school racket these lads brew up.

Conclusion - Over The Top smokes, pretty much every track is a winner and if you like any of the bands mentioned in this review you'd be a dummy not to part with your geld. It's tough to pick a highlight,  but pumping my fist (typing with one hand, of course) to the "Six! Six! Six!" chorus of 'Strike of the Viper' feels mighty fine. On this release, White Wizzard innovate precisely nothing, but when your homage to a particular moment is so spot on, so lovingly rendered, and with such expertise, who cares? Old school for life. Take it eass'. 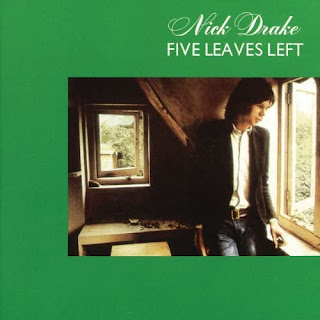 Provenance: I remember receiving this, plus Bryter Layter and Pink Moon as a Christmas gift. How I had suddenly developed Drakemania is altogether murkier; I can't recall being conscious of hearing Nick Drake at university (I was too busy getting into Hanoi Rocks), nor had I been radicalised by Volkswagen.

Given that the number of albums I own is comfortably into four figures by now it's becoming increasingly tough to pinpoint each eureka moment. Here, though, the likeliest culprit is Dotun Adebayo's 'Virtual Jukebox' show held deep into the night on Radio Five Live. It's not the first time I've been stirred from a semi-somnolent state by an arresting piece of music - I vividly recall the instance I first heard Stravinsky's 'The Rite of Spring', which, even with my radio turned down low, sounded like the monstrous awakening of some pagan god.

Incidentally, I don't know if I'll have another chance to state this, but a couple of years ago I met Dotun Adebayo backstage at a Taj Mahal & Keb Mo' show, and had the opportunity to thank him for keeping me accompany through countless late nights. We wound up having a fairly lengthy chat, and I can attest to the fact that he's one of the finest fellows around. Of course, the 'World Football Phone-In' is a wonderfully idiosyncratic and colourful take on the beautiful game as played around the globe.

Weren't we supposed to be talking about Nick Drake?

Review: Coming from the same Britfolk scene as other luminaries such as John Martyn, Sandy Denny, John Renbourn and the rest, Nick Drake now looms as a big beast but during his own lifetime sold a paltry number of records and, by all accounts, was a useless live performer. As a keen reader of books and articles about the British folk revival movement (for anyone interested, Rob Young's Electric Eden is a great primer; and JP Bean's Singing From the Floor is as entertaining an oral history of any moment that you're likely to encounter), there is a definite sense that Drake was of the scene but not exactly part of it. His diffident nature and standoffish attitude to people he didn't trust (i.e. almost everyone) created a kind of static with Britfolk's other performers, who seemed a gregarious bunch and were very promiscuous in terms of performing on each other's projects. In a world where openness, community and collaboration were the watchwords, one can almost picture Drake huddled in a corner.

And perhaps it is this very quality that means Drake endures as a folk icon where others have faded from consciousness; for Five Leaves Left burns with an intense introspection. If you've ever experienced the discomfiting intimacy of someone leaning in too close to talk, you have some idea of the effect that Drake's music can have. The spell is broken somewhat on tracks with a degree of orchestration to them - the swelling strings of 'Way To Blue' and 'Day Is Done' allow the listener to step back a pace or two - but those songs where it's just Drake and his guitar (and perhaps a smattering of bongos - it was 1969 after all) can feel harrowingly personal.

Isn't this what we want, though? Don't we hope that the very best music jolts us away from the workaday and prosaic reality that most of us inhabit most of the time? Just yesterday I was listening to Jorge Ben Jor and, at his best, the soft pulse of his tropicalia rhythms enable me to dream myself away from the flinty rain of East Sussex. And so it is with Five Leaves Left, but in this instance I feel like I'm not in any geographical location that exists in reality, but in the dark meadows of a strange and sad land of the imagination. When John Martyn recorded 'Solid Air', a song about Nick Drake, he created a thick and woozy sound, a soup of indistinct fuzz that moves beyond words to capture the essence of Drake's music. Martyn sang that song in an exaggerated slurring manner, which again feels nothing more than a magnification of Drake's hushed and humble delivery, the opposite of the kind of declamatory holler that many folkies of the period preferred.

This, then, wasn't the voice of the rowdy ale-sodden basement club, but of solitary twilights and lonely bedsits. However, I wouldn't call this confessional music; yes, it sounds like Drake is trying to impart some inward melancholy to you (and only you), but what emerges lyrically is so opaque and elliptical that one is left with impressions rather than exactitudes. I believe that this is a source of Drake's endurance as an artist; no matter how many times you listen to Five Leaves Left, there's a sense that, once final track 'Saturday Sun' has slipped away from view, you still haven't quite grasped the whole picture. The vague sense of dread, the amorphous thought-pictures, the indistinct edges to Drake's music sum up to a cloud of unknowing, a feeling that there are further layers and mysteries to be uncovered. And who am I to state otherwise?

It seems churlish to mention album highlights - 'River Man' and 'Fruit Tree' are oft cited in this regard - because this is truly a collection of music to sit with, to absorb and to contemplate in its totality. Five Leaves Left is not an album I would ever listen to whilst performing tasks or chores, nor would I ever consider it wallpaper music. Such quietly powerful music, with the potential to transport you temporarily from the humdrum clatter of life, deserves the attention it quietly - but insistently - demands.