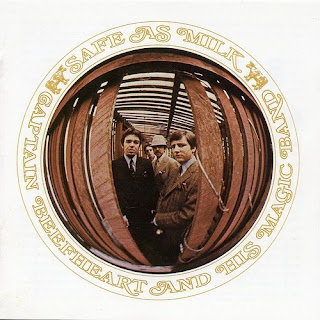 Provenance: My Dad is a big Zappa fan, so as a consequence had a couple of Beefheart releases that included some degree of Zappa participation - the joint Zappa/Beefheart album Bongo Fury and the Zappa-produced Beefheart release Trout Mask Replica.

Nevertheless, I came to Beefheart fairly late, and mostly through reading about him. I think I needed this primer, because the one time I put Trout Mask Replica on as a teenager, I was left utterly flummoxed. Granted, I didn't have the most adventurous taste in music, and even now I am not sure as to whether I would derive much enjoyment from listening to it; TMR just seemed too wilfully weird.

Having read about it, I now think I'd get some appreciation at what was being attempted, and possibly its execution. But a few albums really caught my eye - Bat Chain Puller (Shiny Beast), Clear Spot and this, their debut - Safe As Milk. So now I own all three.

Review: On one level, and at least if you were only paying attention to the first three or four songs, you might be tempted to file it alongside the slew of other blues-rock bands emerging from both sides of the Atlantic during the mid-1960s; certainly, at the chewier end of the spectrum, but not a million miles from either the Pretty Things, Rising Sons or Canned Heat.

Yet it's there from the very first moments; there's a slightly manic edge to the voice intoning "I was born in the desert / Came on up from New Orleans / Came upon a tornado / Sunlight in the sky." Those lyrics! They both hang together, and yet don't make much sense at all. And once the slide guitar gives way to the full band in clattering form, there's both a precision to the playing and a shiftiness where rhythm is concerned that sets it apart. 'Sure 'Nuff 'N Yes I Do' both sounds like the archetypal sixties bloozer and an observation of the genre through the proverbial looking glass.

There follows five more tracks of excellent, if twisted, takes on blues and pop in the period mould. Sometimes, such as on 'Dropout Boogie', the fuzz guitar and Beefheart's hyper-guttural vocal grant the music an air of snarling menace; on others, such as 'Zigzag Wanderer', the jingle-jangle of the Byrds is played with more swing and abandon than McGuinn, Hillman et al could ever muster. Then follows a trio of tracks so extraordinary that I don't think such a sequence was matched on any other release from 1967, and possibly thereafter.

First up is the electric jugband stomp of 'Electricity', Beefheart's strained, strangulated vocals stretching out atop the futuristic bore of a theremin. The theremin is both a perfect instrument to take the lead in a song titled 'Electricity', and also utterly incongruent with the hoedown jigging along behind it. It's mad, it shouldn't work, and of course it comes together.

Next is 'Yellow Brick Road', so saccharine you'd take pause before playing it to a diabetic, with cloying lyrics like "Bag of tricks and candy sticks / Peppermint kite for my toy." I vividly recall the first time I heard the chorus come crashing in, with the force and seeming heaviness of death metal, Beefheart's voice transformed from twee songster to the cavernous roar of an explosion in a mine shaft, "Yellow brick, black on black / Keep on walking and don't look back". Underneath, a roll of toms rumbles like thunder; at once, the tone is ominous, fearful and uncomfortable.

Finally, the piece de resistance - 'Abba Zaba'. This one short track seems to contain all the music one could ever wish to hear. The lyrics seem to come from the Marc Bolan "hubcap diamond star halo" school of writing, yet conceptually come together to make more sense on an imagistic level than anything T.Rex ever accomplished. Simply put, 'Abba Zaba' sounds nothing like anything else going on at the time; the percussion alone, courtesy of John French, makes you wonder whether his DNA was spliced with octopus. I believe it was French who once described Ry Cooder's guitar over the third verse as "taking off like a bird, just floating over the melody", and it's spot on. All this whilst guitars whirr and crash, Beefheart and co. chanting about 'Babette Baboon'.

Who else could've done this?

The rest of Safe As Milk contains stellar performances; the gritty, harmonica-driven 'Plastic Factory' sounding like a blueprint for Tom Waits' gnarlier moments and 'Grown So Ugly' turning the blues into math-rock. Yet none of this possesses the difficulty - and seeming obscurantism - of Trout Mask Replica. It's perfectly accessible pop music, if one accepts that a steady beat and tonal consistency don't have to be part and parcel of the deal. But Safe As Milk is much more than that - for me, it remains one of the most essential releases of the era, entirely identifiable with the experimentation of late 1960s acid rock and psychedelia yet almost a goad to other bands, as if to say "see? You can take it further and still make music people can sorta groove to." Tip top entertainment.