Provenance: I was only dimly aware of Body Count for many years, due to the notoriety of their 1992 song 'Cop Killer'. Nonetheless, quite by chance I stumbled across 'Black Hoodie' from Bloodlust on YouTube and was pleasantly surprised.

In any case, I prefer my rap-rock crossovers more of the Public Enemy and Anthrax flavour, as opposed to Run DMC vs Aerosmith. Can't particularly knock the latter, but it sounds tame compared to Chuck D and co. making an industrial sized ruckus.

Review: You don't so much as listen to this album as get beaten around the face with it. At times, the most accurate summation of the experience I can muster is that it's the aural equivalent of repeatedly taking a tyre iron to the bridge of one's nose. This is, of course, glorious. Heavy metal can be many things; slow, stately, symphonic, fast, virtuosic - but there's always space for a spot of the ol' ultraviolence, which is exactly what Ice T et. al. serve up for the discerning listener.

More albums should start with some kind of siren noise, incidentally. It's fucking cool. Doubly so if that song features Megadeth's Dave Mustaine, which 'Civil War' does; but it also contains a lyric that isn't too far flung from Frank Zappa's 'Trouble Every Day' in terms of message. Think of it as a twenty-first century update, but where Zappa seemed to meet the challenges of the day with a peevish lassitude, Ice T demands his audience take a side. Looking at what's unfolding in the body politic of the USA, how could it be any other way?

I was a bit worried that the entirety of Bloodlust would be a political diatribe - not because that is, in and of itself, a bad thing, but because Body Count aren't the most subtle operators. I was therefore delighted to hear that second track 'The Ski Mask Way' is brimming with all kinds of villainy and devilment. Basically, it's a paean to the practice of home invasion. Not something I imagine that we'll be hearing on BBC Radio 2 any time soon, I'll wager. Still, Ice T delivers it with a convincing aplomb. And why should popular music not be so matter-of-fact about objectively criminal pursuits? I recall seeing Ice T talking in a documentary about how he was influenced by the writing of Iceberg Slim, a pimp and all-round rascal who wrote books detailing his version of street life. I live in a society that tolerates any kind of awfulness if it's written plainly on a page, but recoils the moment it's depicted in song. Won't someone think of the babies?!

Aside from Dave Mustaine, a few other heavy pals are roped in to help. Max Cavalera (Sepultura) roars the refrain to 'All Love Is Lost', whilst Lamb Of God's Randy Blythe is on hand to lend some heft to 'Walk With Me', a true highlight. In truth, though, Ice T doesn't need too much window-dressing; his declamatory, hyper-aggressive delivery is the perfect match for Body Count's riffing. This is a band who make their instruments sound like power tools, and yet there's no shortage of finesse there. Indeed, 'Raining In Blood / Postmortem 2017' is probably the best Slayer cover I've heard, and it really works with (new) rapped verses. (NB - for those squinting at the tracklist, I am happy to report that 'Here I Go Again' isn't a reinterpretation of the Whitesnake arena-botherer of the same name.)

Still, I think Bloodlust reserves its strongest meat until the final furlong of the album. 'No Lives Matter' is a provocative title, and true to form, it's a slamming dose of focused, righteous rage. It's preceded by a short monologue by Ice T on the vacuity of the phrase 'all lives matter', which is succinct and spot on. I don't know how anyone can tune into the news or scroll through a social media feed without coming away with the notion that institutional racism is not a bug but a feature of American law enforcement. In a similar vein, 'Black Hoodie' - the number that piqued my interest in Bloodlust - is a two-fisted take-down of racial profiling by, you guessed it, law enforcement (NB - I mention American policing specifically in this review, because that's what Body Count are talking about, but things are far from perfect here in jolly old England). 'Black Hoodie' is the best track on Bloodlust - a chattering verse riff married to a doomy chorus, and Ice T spitting like he wants to strangle a motherfucker.

I would not listen to this album whilst in charge of a motor vehicle. I could not listen to this album when reading a book. When would I indulge in a spot of Bloodlust? Working out at the gym, preparing to enter a cage fight, and doing my taxes. The Body Count of Bloodlust does not strike against its enemies with surgical precision - it sledgehammers them into submission, and doesn't let up. Strange, then, that an album shot through with such a bleak strain of reality is simultaneously as affirming - and fun - as Bloodlust is, but that's testament to the skills of Ice T and Body Count. Powerful stuff.
Posted by AC at 09:13 No comments:

Death Walks Behind You - Atomic Rooster 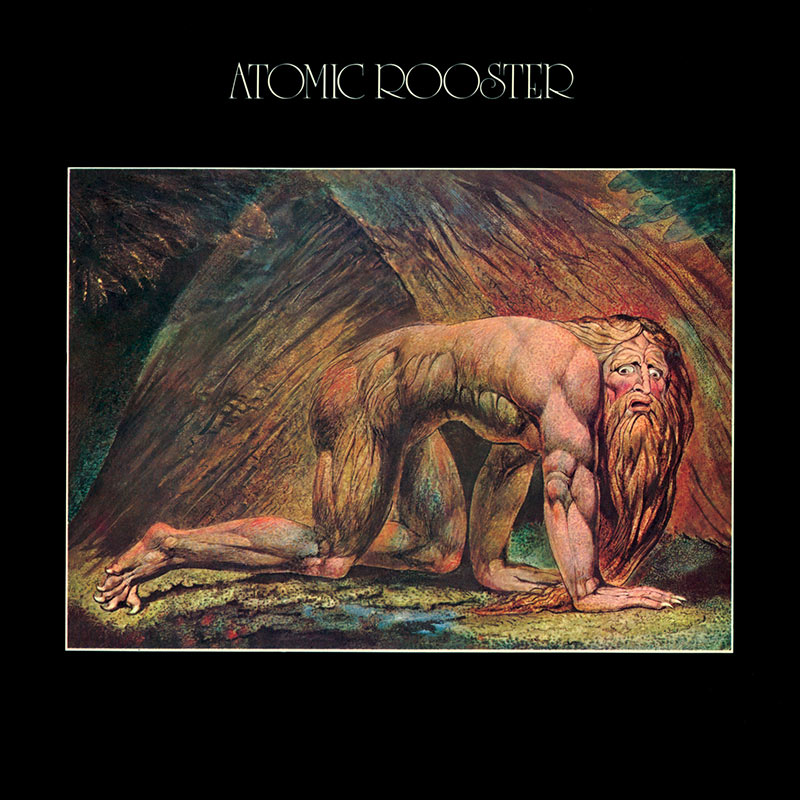 Provenance: I heard a version of 'The Devil's Answer' on some completely random rock compilation that also featured INXS and Hootie & the Blowfish. I liked it, so when I came across a CD version of this album that included two versions of 'The Devil's Answer' as bonus tracks (as far as I'm aware, it was only ever released as a single in the UK), I thought to myself, what the heck, let's have a bash at some of their other stuff. Also, you can't fault using a William Blake monotype as cover art.

Review: After the gossamer-light ululations of Kate Bush, we're back down on terra-very much-firma with the clunking fist of Atomic Rooster. The band look every bit as typical and anonymous as you expect them too - like three replacement members of Steppenwolf, or indeed, absolutely anyone from Cactus - and don't make any surprise moves on the musical front either. Another early 1970s 'eavy and 'umble outfit with a few proggy pretensions. File next to virtually every other band of the era aside from Black Sabbath, who at least had the good grace not to lard their nascent doom-metal with lashings of organ. Every fucking band of this time thought a big ol' Hammond was the key to sounding portentous, when really the answer was feed your bassist too much cheese before bedtime and then let him write lyrics about the resultant experience.

This is all a bit unfair with regards to Atomic Rooster - or, at the very least, Death Walks Behind You - because I think it's a top quality album. Just because I've heard a gajillion bands crawling their way through the doped-up sludge rock ooze of the early 1970s doesn't mean that there aren't a few good'uns amongst them. It's true that I spent years trying to convince myself that Deep Purple were decent when they actually weren't, but some, like the Groundhogs, or Mountain, or the Edgar Broughton Band, or even Uriah Heep did something neat enough or funny enough to distinguish them from the patchouli-powered peloton. So, what distinguishes Atomic Rooster's sophomore effort from the likes of Leaf Hound, Elias Hulk, et al.?

The answer - songs, dear boys, songs! Whilst many of their peers seemed content so merely pen frameworks for their semi-improvised jamming (yawn), the Atomic Rooster lads had the good grace to actually write some tunes. I'm sure a goddamn Night Sun album sounds great when your whacked off your gourd, but in the mundane environs my front room in 2019, I'm unlikely to take too many journeys to the centre of the mind assisted by sparkling water and Glacier Fruits. And thus, the music has to stand or fall by its own terms.

Death Walks Behind You starts almost like something from King Crimson's Red, albeit not quite so wilfully oblique, a minor-key piano theme jutting against some dissonant ambient noise, but then it crashes into an unexpectedly funky chorus riff, one that manages to be both catchy and heavy at the same time. The verses are good as well; a descending chord sequence that sounds like a demonic inversion of Chicago's '25 or 6 to 4'. It builds tension admirably, with the release coming in a reprise of the chorus. This is cool! The next track isn't so great, seeing as it sounds a bit like a lumpen version of Yes' 'Roundabout', or perhaps a Focus outtake where Thijs van Leer forgot to bring his flute along, but it's okay as far as rock instrumentals of this vintage are concerned, plus it's called 'Vug' so I sense the band didn't think too much of it either. It is certainly 'eavy though!

However, here's a decent joint on the docket - 'Tomorrow Night', which actually gave Atomic Rooster a UK top twenty hit. Thematically it's a slight departure from the rather chesty boasts about sexual conquests made by many of these spectacularly hairy groups, as it introduces notes of doubt and insecurity into the mix. It's still delivered with stridency by guitarist / vocalist John Du Cann (whose rich low tenor delivery is very appealing), but it fits in with an undertow of existential confusion that runs throughout Death Walks Behind You. At this juncture, I feel I should also mention that Du Cann's rhythm work on the album is really fine, abhorring anything too finicky in favour of a sledgehammer attack, often barrelling huge power chords at the listener in ack-ack bursts. If anything, drummer Paul Hammond is the busiest, his combination of heft and jazzy nous a welcome contribution. Somewhere in the middle is the talented, tragic Vincent Crane (organ / piano), who often complements Du Cann but allows himself the odd Keith Emerson-flavoured wallop on the keyzzz.

I guess it's the forward motion, the propulsion behind many of these tracks, that makes Death Walks Behind You such a listenable confection. 'Sleeping For Years' is a proper standout; in other hands this could have devolved into some interminable head number, but here it whacks you around the chops a bit and then lets you go to enjoy the next offering. That offering is 'Can't Take No More', which sounds a helluva lot like the Electric Light Orchestra's 'Don't Bring Me Down'. Songs sound like other songs, I get that, but Jeff Lynne of ELO fame was added as a writer to The Hives' 'Go Right Ahead' after it was recorded, because the band thought it sounded so similar.

Death Walks Behind You doesn't really falter in quality as an album until right at the end - 'Nobody Else', the penultimate track, is built around a lovely, plaintive piano theme from Crane - and it's only with closing instrumental 'Gershatzer' that it's a bit ragged and disjointed. It's the kind of thing I guess The Nice did fairly well, and I don't like The Nice. Still, if you can stomach the odd indulgent instrumental for the sake of a collection of high quality, slightly foreboding and melodically strong hard rock, Death Walks Behind You should be on the Crimbo list.