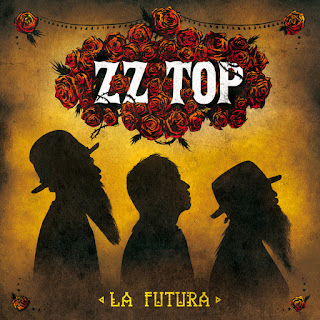 Provenance: By the time I wound up getting this album I was already a hardcore ZZ Top fan. Big into the albums and a few years away from being thoroughly disappointed by a lacklustre live performance at Wembley Arena.

(The Wembley gig, which I attended with my friend Sandy, sucked. The Arena a bit of a pain to get to on public transport, isn't it? Once there, I went through a screening process more rigorous than at most international airports and then spent £14 on two beers.

Jimmy Barnes from Cold Chisel was the support act, and although his ragged bellowing was fun for a while, he failed to do 'Seven Days', his best solo track. ZZ Top were worse; Billy Gibbons can move about but can't sing, whilst Dusty Hill can sing but can barely move.

After little over an hour, including covers of 'Sixteen Tons' and 'Jailhouse Rock' - a song that nobody ever needs to cover, ever again - the Top shuffled off stage and the lights came on. Sandy hoped that the second half would be better, but it was clear to me that they'd stuck a fork in it. Sixty-five, seventy minutes at a push? Eye-watering ticket prices and untold hassle? Cheers guys. Frustrated, we headed to the much-missed Big Red bar, saw a cracking metal act for free, and were able to get a pint under a fiver.)

Review: I don't know what everybody else was expecting from ZZ Top in 2012 but kicking off La Futura with a cover of a 1989 Houston hip-hop track possibly wasn't one of them. Yet ZZ Top have never been afraid to go off-piste, from individual oddities such as 'Manic Mechanic' from Deguello right the way through to fusing synthesizers and drum machines with southern boogie, practically inventing their own genre with Eliminator. So repurposing DJ DMD and the Inner Soul Clique's '25 Lighters' into 'I Gotsa Get Paid' - a nice nod to 'Just Got Paid', no? - shouldn't really set any eyebrows heading north.

In fact, if one wasn't aware of its background, you'd just think it was another great raging slab of ZZ Top's smoke 'n' chrome hard rock that's been their hallmark since Rhythmeen. Crucially, both 'I Gotsa Get Paid' and the chugging blueser 'Chartreuse', tracks uno y dos, are simply better than anything from previous album Mescalero; an album that had its charms, not least the preponderance of Spanglish in the lyrics, but was ultimately too sprawling, flabby and unfocused for its own good.

Here, though, ZZ Top have enlisted Rick Rubin, which means two things - no excess, and a back-to-basics sound. So, aside from a few guitar overdubs, what one hears on La Futura is the basic rock combo formula of guitar, bass, drums and voice. There's the odd extra flourish here and there - the rather ponderous ballad 'Over You' fleshes out its sound with a much needed keyboard, for example - but insofar as these elements are used sparingly, it's a strikingly similar setup to that of ZZ Top's best album, Tres Hombres.

Accommodations have been made for time passed, however. Billy Gibbons, one of the more instantly recognisable guitarists out there, plays with gusto in that choppy, greasy style that makes ZZ Top records so goddamn fun, but he's quite obviously close-mic'd to allow for deficiencies in the voice department. But it's good! In fact, the additional sandpaper to a voice already coloured with road rash makes everything sound ten percent meaner and sleazier than would otherwise be the case. Sticking with performances, my only real bugbear is that Frank Beard still demonstrates some tasty stick work but it's nowhere near as creative as the rhythms he was banging out before Eliminator. Go back and give those old platters a spin and you'll hear some chewy, fiddly drum figures. Beard was (is?) a superb drummer with a great pocket feel. On La Futura the latter is in evidence, but it lacks finesse.

(I remember playing 'Just Got Paid' with my former band, and easily the most taxing aspect of recreating the feel of the original was getting the drum pattern right. Fortunately, that's nothing to do with me, guv!)

If one or two numbers can be a bit samey - just how many times can you chop and change the blues? - it's alright, there's enough variety elsewhere to maintain interest, and at a hair under forty minutes La Futura is well-paced. I was surprised a couple of times - 'Flying' High' had an almost power-pop feel to it, and the best track was a little unexpected. I've often been underwhelmed when ZZ Top slow things down, yet the molasses-crawl of 'It's Too Easy Manana' possesses an authoritative, anthemic quality and one of the more characterful vocal deliveries on the joint. Mescalero was rotten with these songs, which, when coupled with its hour plus run time, dragged the thing into a swamp. Here, the two strollers act as welcome interludes.

All things said and done, La Futura isn't going to cause ships to capsize, but it's a very good addition to the ZZ Top canon. Stripping back their sound exposes the dirty innards of the engine, and they sound all the better for doing so; I don't think there's a skeevier intro around than the sound of Gibbons' guitar revving up on 'I Don't Wanna Lose, Lose You'. A triumph, then - and certainly more rewarding than the live experience.