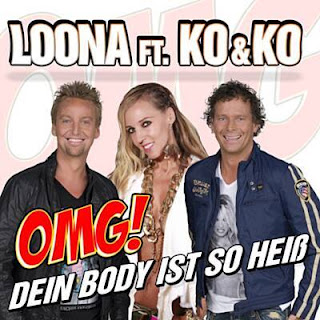 It was six hours ago, but I've already forgotten. Six hours ago, I stared into the inky blackness of the Spotify interface, and the abyss stared back.

Yes, it had really come to this. The darkly gnomic utterances of Marlon Brando's Colonel Kurtz buzzed in my mind as my finger hovered.

Six hours ago, I did not have this grim knowledge. And even now, I cannot tell you how this came to be, save that I was chasing a thread through Wikipedia and ended up being confronted with a discography containing a single glorying in the name of 'OMG! Dein Body Ist So Heiß'.

Come on now, I hear you say, it's a rum business mangling up Nietzsche and Apocalypse Now! to cheap effect. It's nicht so schlecht, surely? And yeah, in one sense it's just one piece of music from a digital jukebox that I can switch off in the blink of an eye. Furthermore, it's gotta be just some throwaway Euro-pap, one bopper amongst many that you hear as you sip your watered-down margarita poolside. A mote of dust, drifting in a Balearic morning sky.

Here's the deal; it's not as bad as going up the Mekong to terminate a rogue officer with extreme prejudice, but nor can this be written off as mere sub-Vengaboys pabulum. It's bad, very bad. Aggressively, offensively bad. I'm not entirely convinced that this isn't the stray product of a top secret psy-op loosened unwittingly into the world. The bleakest corners of the MKUltra project didn't harbour such crimes as this.

So what do Loona (for it is she) and this pair of ridiculous middle-aged popinjays conjure up? Well, I've been lucky enough to experience a wedding in Romania and a boat cruise in North Macedonia, and the common factor between them was turbo-folk. In a world where electro-swing exists, turbo-folk still reigns supreme as the single shittiest genre of music ever devised. The late Barry White farting into a bathtub is more appealing.

Turbo-folk is the unholy alliance of what is typically upbeat or lively folk melody with electronic, often synthesised instrumentation, with a club-friendly BPM pumped underneath it all. This is even more wretched than that, being some mutant version - turbo-polka or turbo-oompah, maybe. I speak the most rudimentary German imaginable, but even if I was beaten half to death with a weißwurst my two functioning brain cells would still be able to parse the idiotic lyric, blatted out here by Loona in a vocal drenched in robotic autotune. Ko & Ko's role is obscure, save for the odd vocal interpolation - one wonders which brother pressed play on the Casio demo function to excrete this tune?

At best, I can say that 'OMG! Dein Body Ist So Heiß' resembles music inasmuch as the sounds are fashioned into a recognisable song structure. That's your lot. I'm off now to listen to something far less depressing, like Suicide's 'Frankie Teardrop'. Tschüß!