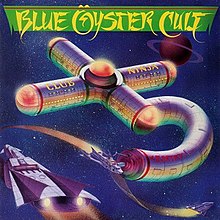 Provenance: I'm one of the biggest Blue Oyster Cult fans under pensionable age in the UK. I've got all the albums, hit up their shows, and I even used to pester them via email.

NB - this is my second BOC review and I feel I've hardly touched my music collection. However, if I did a different band every week, by the end I'll just be down to a rotation of Blue Oyster Cult / Steely Dan / Tom Waits (no bad thing, right?). For the sake of variety, I'll be sprinkling in the 'big boys' from now on, so you might get two or three BOC reviews before you encounter Atomic Rooster or Electric Wizard. Lucky you.

Review: In this guy's opinion the classic era of Blue Oyster Cult stretches from their self-titled debut (1972) through to Spectres (1977). One could therefore surmise, on that basis alone, that the 1985 album Club Ninja is not a classic - and one would be correct in doing so. However, just because a band is no longer in their pomp doesn't necessarily mean they aren't capable of pulling out the stops - witness Ratt in 2010 with Infestation, Cheap Trick's clutch of post-2005 releases or even Bob Dylan's sublime Love and Theft and Modern Times releases. Hell, I'd settle is this was Blue Oyster Cult's Get A Grip.

Well, Get A Grip it ain't. As was the case with last week's Hot In The Shade, Club Ninja features awful cover art, compounded by an absolutely dire name. [Adopting Jerry Seinfeld voice] And what's the deal with ninjas anyway? There was, of course, the execrable Michael Dudikoff vehicle American Ninja, a Cannon Films release from the same year as Club Ninja. You've got the Teenage Mutant Ninja Turtles, who made their first comic book appearance in 1984. The geekiest explanation involves the track 'Shadow Warrior', which doesn't mention ninjas explicitly but was co-written by thriller / fantasy novelist Eric Van Lustbader, who did write a 1980 novel called The Ninja. Your guess is as good as mine.

Another common factor with Hot In The Shade is songwriter Bob Halligan Jr. He wrote some cool stuff for Judas Priest like 'Take These Chains' and 'Some Heads Are Gonna Roll'. On his one outing with Kiss he penned 'Rise To It' (the song where Paul Stanley brags about maintaining an erection) and the crapfest 'Read My Body'. Here he's responsible for similarly cerebral cuts such as 'Make Rock Not War' and 'Beat 'Em Up'. Halligan now plays in a band who advertise themselves as a fusion of rock, Celtic and contemporary Christian music.

By this point in time BOC had sloughed off original members Albert Bouchard (drums / vocals) and Allen Lanier (keyboard / guitars), and had also long abandoned their creepy psychedelic proto-metal in favour of a more 'commercial' synth rock sound. Given all that Club Ninja is, in places - frustratingly - quite good. However, those two or three inspired tracks can't make up for the remainder on offer here, because when Club Ninja is bad, it's horrible. Brutally, irredeemably horrible.

The album starts promisingly enough, with Eric Bloom delivering a delightfully hammy vocal performance on the propulsive 'White Flags'. Buck Dharma (both an underrated guitarist and singer) is up next on 'Dancin' In The Ruins', which if anything is even better. I should point out that anything that works on Club Ninja does so either because of the music or the conviction of the vocal performances, because the lyrics are uniformly bobbins. The only track that gets close to resembling the golden years of Blue Oyster Cult is the sumptuous, shimmering 'Perfect Water', once again sung by Dharma, who also brings some questing guitar work to the table. These songs are really, really decent and could quite easily feature on 'best of' compilations without appearing out of place.

The rest, alas, is drivel. The aforementioned 'Make Rock Not War' and 'Beat 'Em Up' are as boneheaded and uninspired as the titles suggest. 'Spy In the House of the Night' has a stadium-sized chorus and a kicky riff to commend it, but that's about it. The final three tracks - 'When the War Comes', 'Shadow Warrior' and 'Madness To the Method' - all exist within a lacuna of their own; competently played, slickly produced but otherwise devoid of anything interesting. One exception - Dharma's guitar solo on 'When the War Comes' is much better than the track deserves. It's a song that floats by without leaving a mark, despite a voice-over from shock-jock Howard Stern (who was, I believe, married to Eric Bloom's cousin at the time) and, unaccountably, lifting the 'ooga-chu-ka' chant from Blue Swede's version of 'Hooked On A Feeling'. That sounds like something you'd want to be hepped to, right? Be my guest.

There's also not enough Joe Bouchard on this album. One of the defining elements that made Blue Oyster Cult brilliant was the interplay between the Bouchard brothers, Joe's freewheeling bass weaving around Albert's skittering jazz-influenced drumming. Jimmy Wilcox, the drummer on this album, played it straight, giving Joe little room for manoeuvre. And he's given, what, half a song to sing? Screw that. Joe Bouchard is a good dude, not least because he gave me an interview for my school magazine back in 2002 and answered all my dumbass questions with grace and patience. Did I really imply he might've been a Nazi sympathiser? Jeez Louise.

To sum up - Club Ninja was not the disaster it's sometimes made out to be. Indeed, Blue Oyster Cult followed a trend of 70s bands trying to update their sound to stay relevant. The gold standard for this approach will always be ZZ Top's Eliminator, which worked only due to the rarest of alchemy. Instead, this represented the terminus point of BOC's slide towards anonymity - where once they were the 'red and the black', now they were the dull and the bland. At least this didn't represent the end of their story...
Posted by AC at 14:53 1 comment:

Hot In The Shade - Kiss 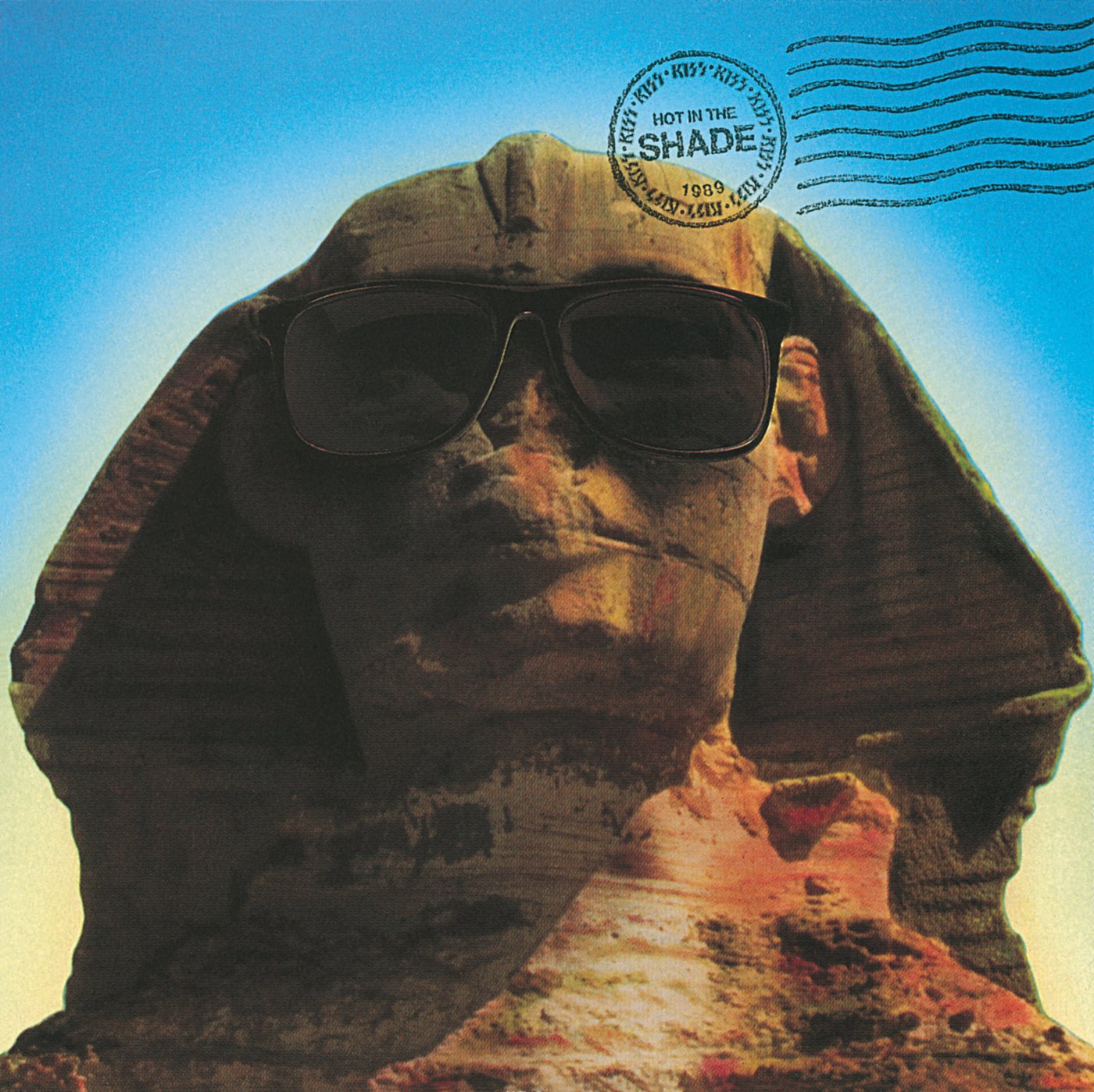 Provenance: Another piece of shit I paid a quid or two for.

Review: This is rancid even by Kiss' standards. No mucking around this week with some convoluted preamble about how Bruce Kulick got me dumped or whatever, I'm going straight in on this abomination. I realise now that at the time I should've taken one look at that dorky sphinx and spent my money on a can of Pepsi.

I've been suckered by Kiss before now. I got their Double Platinum greatest hits collection as a teenager, which is bulging with catchy, if clunky, nuggets of escapist rock 'n' roll. A band that can come up with glorious trainwrecks like 'Detroit Rock City' and 'Black Diamond' had to be worth a deeper dive, right?

Eh, perhaps not. Certainly not, on the basis of Hot In The Shade (ooh, look, when you make an acronym of the title it spells 'hits' - clever boys! It's also an anagram of 'shit').

Now, even thought Hot In The Shade is an absolute goat rodeo for the most part, there are a couple of songs that aren't as unlistenable as the rest. The opener - 'Rise To It' - is serviceable single-entendre stadium fodder (the gag is that Paul Stanley can maintain an erection) and 'Hide Your Heart' is a hysterical slice of melodrama with a lyric that would embarrass a pre-verbal child, but gets by on conviction and a chorus. That's it. And those are tracks number one and three on a fifteen song slalom down Mt. Shitass. It's January, I've got the heating on low but this album has got me sweating like I'm allergic to it.

Speed up the opening riff to 'Black Diamond', tack on a terrible chorus and complain about paying taxes and you've got the essence of 'Betrayed'. I suppose it would be passable if you've never heard rock music before, or indeed, any music, ever. Try to imagine a song considered too dumb for ZZ Top's Recycler but have Gene Simmons sing it instead, and voila! You've conjured up 'Prisoner of Love'. Can it get worse? Yes. If you've ever wondered what Kiss what sound like if they did a cover of Def Leppard's 'Pour Some Sugar On Me', but somehow made that wretched ditty even more pathetic, then look no further than 'Read My Body'.

It goes on. Hitherto I've been running down the tracks in order, but really once you're past the relative highlight of 'Hide Your Heart' you can pick a song at random and I guarantee you that it'll be so bad that you will feel your IQ dropping in real time. 'Boomerang'? 'Cadillac Dreams'? 'Somewhere Between Heaven and Hell'? 'The Street Giveth and the Street Taketh Away' (yes, really)? This is the kind of music that drives people otherwise disposed towards guitar or drums to rediscover the lost art of mime.

It's not as if Kiss ever did anything revolutionary in their career - musically speaking, that is. 'I Was Made For Loving You' was a bit of a curio as a disco-rock fusion that actually works, but the real genius of Kiss lay in their onstage presentation and the way this was subsequently monetised. Chalk that up to the naked avarice of Gene Simmons and the sheer bloody-mindedness of Paul Stanley, the combination of which ensures Kiss chug on profitably to this day. Yet even though their paleo-rock of the 1970s was derivative and silly, it was distinctive. Probably the biggest crime of Hot In The Shade is that Kiss stopped playing Kiss songs and instead churned out bad parodies of songs whose formulae had proved successful for other bands. I've already mentioned Def Leppard and ZZ Top, but 'Love's A Slap In The Face' could be a Ratt outtake and 'Forever' is, ahem, "inspired" by Cheap Trick's 'The Flame'.

Alright, I've had enough. If I'm going to be charitable, I didn't cringe too much at 'Little Caesar' and whilst 'Silver Spoon' is mostly bobbins I cracked a smile at the "whoa-oh-a-whoah" chorus. If earlier in the decade (Hot In The Shade came out in 1989) Kiss revived flagging interest in their career by unmasking, this is the album that should've seen them committed to a witness protection scheme.  Hot In The Shade saw Kiss trying to play catch-up with the hairspray crowd - a mob that they could legitimately claim to have inspired - and failing miserably, depressingly. Alice Cooper pulled off this ruse (and pretty much everything else, come to think of it) much better. Utterly charmless.
Posted by AC at 14:41 1 comment: