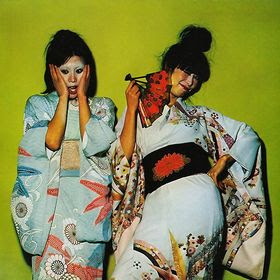 Provenance: Short version - my Dad owns this, and I listened to it when I was younger.

Slightly longer version - I also saw a performance of them on what must've been Top of the Pops 2; and if the recent Edgar Wright documentary is to be believed, I had much the same reaction as many kids did back in 1974.

Namely, why is that frontman singing with such a high voice? And why is he letting Charlie Chaplin play the keyboards?

(Per the aforementioned Sparks Brothers documentary, legend has it that John Lennon phoned Ringo Starr to tell him that Hitler was on Top of the Pops.)

Anyway, great album and an almost automatic purchase on CD, once I'd gotten the bulk of Blue Oyster Cult and Judas Priest out of the way.

Review: The songcraft, adroitness and execution of Kimono My House are so good that it's almost terrifying. Hyperbole? Perhaps, but I've listened to a lot of music, and played a fair bit too, so I like to think I'm not talking out of my hat all the time. I think it helps that I am generally in favour of this kind of arty, ambitious rock in the first place; even better when it has a strong melodic sensibility.

Sparks certainly weren't alone in this era - coevals include Roxy Music and David Bowie, whilst I'd argue that early Alice Cooper (up-to-and-including Welcome to My Nightmare) fit the bill too. Of that group, perhaps nobody - save Bowie - has gone on quite the creative journey that the Mael brothers have undertaken since their first flourishings, one that has taken in glam, power-pop, disco, New Wave, electronica, neo-classical and techno.

Kimono My House is from their glam era, if you could call it that. At the more cerebral end of the glitter spectrum for sure. Yet, despite their tunefulness, there are moments that baffle as much as the most opaque Steely Dan lyric. 'This Town Ain't Big Enough For Both Of Us' as a narrative or conceptual whole makes little sense unless you imagine it as an impressionistic shifting between scenes in different Hollywood movies. The Maels are, famously, film buffs. Go on, say the title in the manner of a narrow-eyed silver screen desperado and you're halfway there. With such material Sparks create a mounting sense of tension and frantic disorientation. It's their biggest hit!

'This Town...' was the one I knew as a kid, and it's the reason I slapped Dad's album on the turntable. I'm glad I heard that song in a pre-streaming era, as I let the needle run on to 'Amateur Hour', a brilliant, witty song about early explorations around sex. Sample lyric: "It's a lot like playing the violin / You cannot start off and be Yehudi Menuhin." All this, I should add, is wrapped in some of the canniest pop music around.

Stick a needle anywhere in Kimono My House and you'll find a smart turn of phrase or allusion. Kant, the Rockefellers and the final act of Romeo and Juliet all crop up (in the latter case, a whole song structured around Romeo's confusion at finding himself alone in the afterlife). Is it too clever by half? Not when it's this fun. A paean to narcissism is delivered via lurching fairground organ in 'Falling In Love With Myself Again'; the chorus to 'Complaints' packs frustration and desperation into a sickly sweet clap-a-long; and best of all, 'Hasta Manana Monsieur' is played as a hard rock tango. Every song here is a winner, and a single Sparks song often carries more ideas than some artists stretch across a whole album.

Before wrapping, I just want to make note of two of the bonus tracks on this CD, something I tend not to do. After all, I'm trying to meet the album on the merits of its original iteration. However, 'Barbecutie' and 'Lost and Found' were, back in the day, b-sides to two of Kimono My House's singles. B-sides! For any other band, these would be the highlights, especially the sugar rush of 'Lost and Found'. At this stage in their career, Sparks were simply too good.

Of course, it wouldn't last; subsequent albums would be uneven or confounding, sometimes by design. Still, it's this wilfulness to go against the grain that has guaranteed Sparks not only longevity but a genuinely interesting discography stretching across five decades. I was lucky enough to see them in 2018, and they covered so much ground, with aplomb, panache and a sense of mischief. It's in the top five live performances I've been privileged to witness by anyone, anywhere.