Funk Beyond The Call Of Duty - Johnny 'Guitar' Watson 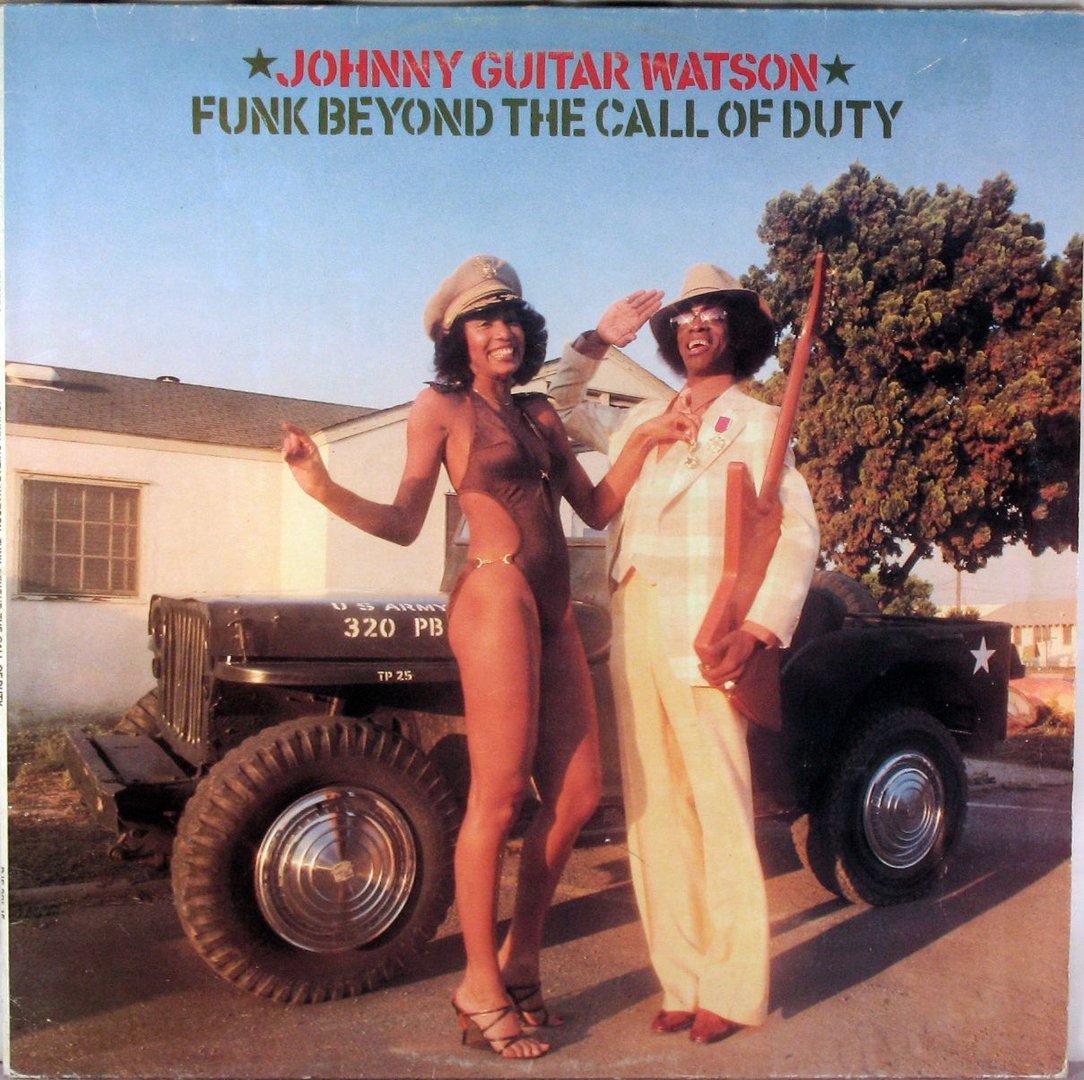 Provenance: I'm fairly sure it would've come through hearing Watson on one of my Dad's Frank Zappa records. You can hear him on 'Andy' and 'In France' (most prominently in the latter). It's also possible I heard him on one of the many blues compilations I bought as a teenager; he's certainly on a couple I own. I can't even remember the impetus behind buying this particular album. There's a (very) good chance I just liked the cover.

But Watson was never one to stick with a tried and tested formula, and so by the mid 1970s he's traded in the pompadour for an Afro, paid a visit to Iceberg Slim's outfitter and switched up his R&B sound for a sleek soul-funk. Such a wholesale reboot can often seem like a desperate betrayal of artistic principals in order to maintain a foothold on the contemporary scene, and it's traditionally been tricky for blues musicians. Here I'm thinking of Muddy Waters' 'psychedelic' adventure with Electric Mud, or Albert King's marginally more listenable I Wanna Get Funky, neither of which will go down in the annals as classics (though I recall a documentary made by Chuck D of Public Enemy wherein he declared Electric Mud to be a favourite; and I've already fessed up to being a big fan of Neil Young's Trans, so I've got form in the contrarianism department too).

Happily, Johnny 'Guitar' Watson and funk were made for each other. It probably helps that he was an active and willing agent in this change of direction. Watson's natural facility for the genre suggests he actually listened to and appreciated the music, as opposed to being shoehorned into performing it by record label suits. It's also unsurprising that a man who was so pioneering with guitar sounds twenty years before Funk Beyond The Call Of Duty would relish the chance to play around with the expanded palette of sounds that funk orchestration afforded.

In terms of the sound, FBTCOD is closer to the lighter, lush funk of the Cate Brothers than the wigged out bass-heavy Parliament P-Funk noise. Alongside guitar, Watson helms a variety of keyboards and synthesizers, and these tend to operate as a bed for his singing and the unobtrusive horn arrangements. But what Watson really brings to the table is a huge dollop of personality. Every track is imbued with the irresistible Watson chutzpah; sly, bantering and humorous, it's hard to reach any other conclusion that he's having a shit ton of fun making this record, and as a listener you really want to join in.

The other joy is that FBTCOD is shot through with Watson's trademark guitar sound. You could put him through a barrage of amplifiers and effects pedals and he'd still be identifiable. His attack gives the game away; wiry, itchy, staccato, bereft of sustain, never staying in one place. There's also a quirky lyricism about his solos, guitar acting as proxy to the human voice - and on 'It's A Damn Shame' as if to hammer it homes, Watson scats along with his own playing (it's glorious).

Watson is good as a soul troubadour on 'Give Me My Love', but even better as a rueful, witty street philosopher on 'It's A Damn Shame', 'Barn Door' and the superb 'It's About The Dollar Bill' ('If you wanna buy chinchilla / It's a pocket killer-diller' is advice I'll treasure for the rest of my days). Whilst FBTCOD isn't an album that will be top of anybody's list (aside from Chuck D's, perhaps), it's never failed to tug on the corners of my mouth whenever it gets an airing. Billion dollar idea: the next title in the Call of Duty video games series should be called Funk: (Beyond the) Call of Duty. That's as far as I've got in terms of detail, but it's surely got to be better than larking around in space like Roger Moore's stunt double in Moonraker, right?
Posted by AC at 10:33 No comments: