Provenance: I like hair metal, so what? The purchase of this album was preceded by a 'best of' collection, which I enjoyed very much. Couldn't wait to hear some Warrant deep cuts.

Review: It was a sad day when Warrant frontman Jani Lane departed prematurely from this world. Addiction to alcohol and drugs caught up with him in 2011, by which time he was living in rather straitened circumstances. Thanks to this particular album, he also had to live with the ignominy of being referred to as 'the Cherry Pie Guy' for much of the latter part of his career.

It's massively unfair, as although he did write the addictive, double-entendre laden smash hit Lane had much more in his locker. Cherry Pie is testament to this - so alongside the usual hair farmer preoccupation with sex there are finely honed, sensitive tracks about loneliness and betrayal. Whilst not quite in the same calibre as Bruce Springsteen, it's fairly indisputable that Lane wrote the greatest butt-rock song about witnessing a murder within a rural community (the track in question is the riotous 'Uncle Tom's Cabin', which has about as much resemblance to the Harriet Beecher Stowe novel as I do to Desert Orchid).

I would go so far as to say that Jani Lane was the best songwriter of the whole glam metal movement. Some of his peers have moved into writing and producing for contemporary artists, and I can't shake the feeling that a sober, focused Lane would have made a mint doing this.

It is sad, too, that 'Cherry Pie' became an albatross for Lane and Warrant. On the one hand, it was emblematic of the big, dumb, sexist rawk scene that was flourishing on the Sunset Strip. It almost acted as a semi-colon to the scene before the giant full stop that was grunge and alt-metal. Given the bleak thematic concerns of what would succeed glam, 'Cherry Pie' sounds almost impossibly airheaded and inconsequential. If I could reach back through time, I'd urge Warrant to enjoy every second about doing silly songs about sex, because you're about to get pounded by lads doing bits about school shootings and blokes getting snuffed in Vietnam.

As with every band of this ilk, Warrant always stowed one or two cigarette lighter moments onto each album. 'Blind Faith' is fairly so-so, but 'I Saw Red' - about walking in on a partner's moment of infidelity - is as good as it gets. Especially considering that it's set up, in the first verse, to sound like a panegyric. It's clever, and it packs a wallop, although I have to confess that the acoustic version on my 'best of' is even better. 'Bed of Roses' is another track that benefits from Lane's shrewdness; here, he plays the part of a lovelorn tenant of a dingy motel, dreaming of a better life for the object of his affections two doors down. Beneath the gated drums, gang vocals and squealing guitars is a very human heartbeat.

I'm also a fan of 'Song and Dance Man', which could be either a celebration of life on the road or a cry of desperation. Maybe it's both; but it possesses a brooding quality to it missing in much other glam metal (the only other hair band that does this convincingly is Ratt; Invasion of Your Privacy might well be the only properly existential album from the spandex brigade). Nonetheless, it's a welcome note of ambivalence in a genre that is generally averse to notions such as introspection and equivocation. Imagine Bread's 'Guitar Man', except it's for people who say 'dude' a lot.

What more is there to say? It's well sung, well played, the hooks are chunky and it sounds exactly like a glossy MTV metal release from 1990 should do. Cherry Pie does feature a banjo on one track, I grant you that, and a version of Blackfoot's 'Train Train', bringing my personal 'Train Train' collection up to two (I've got the Blackfoot joint it where it first appeared). As a sting in the tail, Cherry Pie rounds off with a cheeky little spice called 'Ode To Tipper Gore', essentially a supercut of profanity uttered by Lane in live settings. Completely puerile, but it must've seemed a tad daring given the political climate of the time (and the outrageous actions of Tipper Gore and her troupe of self-appointed moral arbiters, the Parents Music Resource Center). Inside the liner notes, 'Ode To Tipper Gore' sports the caption "Freedom of Speech...What a concept!", making Warrant one of the unlikelier upholders of the First Amendment flame.

The bottom line is this - if you don't like glam metal you won't dig Cherry Pie. However, if you've got any regard for the genre, i.e. you're an individual of refined sensibilities, not only will this hit all the usual marks, but it'll give you just a bit more juice than usual in the songwriting department.

Now, just for the record let's get this story straight; me and Uncle Tom were fishing, it was gettin' pretty late...
Posted by AC at 13:33 No comments: 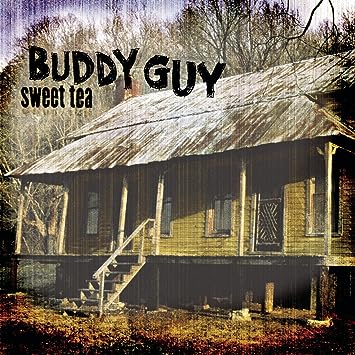 Provenance: I think anyone with a more than passing interest in the electric blues knows who Buddy Guy is. Still kicking, still playing, with a slew of solo releases and guest appearances to his name, Guy is considered a living legend.

I also have one of the most distant personal connections imaginable. My partner's stepdad's sister married one of Buddy Guy's sons. So, yeah, usual caveats apply when reviewing the work of a close family member.

Review: I pointedly mentioned the electric blues in my introduction, because this is what Guy is most famous for. And on Sweet Tea, fans of his spiky, fluid playing have got more than enough to chew on. Most tracks are over the five minute mark, with 'I Gotta Try You Girl' stretching its legs for well over twelve minutes. You wanna hear some electric guitar, friend? You got it.

So it's strange that the most arresting track on the whole album - the opener, 'Done Got Old' - is a relatively concise three-and-change minutes long, and consists of a close-miked Guy and sparse acoustic guitar. It's a weird song, too - because many of Guy's direct influences would flip their dotage on its head, bragging about their experience or ability to keep up with the youngbloods. Think Muddy Waters with 'Young Fashioned Ways' - "there may be snow up on the mountain, but there's fire down under the hill". 'Done Got Old', however, is a straightforward lament - no braggadocio, machismo or defiance, just a quiet sadness that his body is giving up on him. It's a sombre introduction.

And maybe it's supposed to be the banner that hangs over proceedings, a memento mori to accompany the startlingly vital racket he conjures up on Sweet Tea. 'Baby Please Don't Leave Me' has a title that sounds like a Chess cut from the 1950s, but the clattering drums and skronky overdriven bass makes it sound, early doors, more like a particularly sludgy desert rocker. The guitar riff, when it kicks in, sounds like one of the blues tracks that Led Zeppelin stole, if it was played on high-tensile cables. It's a noise you might expect more from All Them Witches than a guy who literally played with Muddy Waters and Junior Wells.

The highlight of Sweet Tea is 'Stay All Night', another relatively short number. It stalks, it prowls, it rumbles; and a flint-eyed Guy doesn't so much ask for love as commands it. It's down-low and nasty, lower than a snake's belly. At this juncture, I should mention that, aside from the quavering opener, Guy sings wonderfully, with a similarly strained, edgy style as Elmore James, albeit dialled down a notch or two. He was still hitting some impressive high notes at the age most people this side of the Atlantic anticipate receiving free bus passes.

Production is a factor that can make or break a record. As much as I love the bells and whistles approach on albums by the Beatles, Jellyfish, Pink Floyd and other studio cosmonauts, most blues music is served by the KISS maxim; keep it simple, stupid. Going back to Chess, some of those Muddy joints are raw as hell; there's a 1951 cut called 'She Moves Me' where Leonard Chess himself provides inexpert but effective backing on a bass drum to accompany Mud's elastic guitar. Back in the twenty-first century, Dennis Herring has kept some of that magic alive, whilst compensating for advances in technology. You can hear amps humming, snares rattling and the odd clam or two from Guy. It doesn't matter; this is more about capturing a mood and a moment than technical ecstasy (Joe Bonamassa and Kevin Shirley, take note). To these untrained ears, it also sounds like the instrumentals were performed live-in-studio.

The overall effect is very in-your-face, and all the better for it. The guitar isn't overly processed; a dab of echo here and there, but otherwise letting an overdriven tube amp, and of course Guy's expert fingers, do the heavy lifting tone-wise. On 'Tramp', cleaving the old soul classic with an arrangement that sounds like ZZ Top circa the kooky Deguello, Guy bends those strings so aggressively you can hear the muscle and blood through the speaker; the same can be said for the portentous closer 'It's A Jungle Out There'. Meanwhile, on 'Look What All You Got' and 'Who's Been Foolin' You', it sounds like Buddy Guy is fronting Dr Feelgood. It's a genuine pleasure to hear the greatest living exponent of the Chicago blues reminding us all why Clapton, Richards, Beck and the rest bend the knee.

I hear two Kings in the way Guy plays; he's got the pyrotechnic flair of Freddie but hits his bends like Albert (a fellow who, at his best, sounded like he was bending the very molecules of existence). There's something else there, though - a simmering malevolence that gives his every solo or interpolation that bit more bite and excitement. Perhaps 'Done Got Old' was a trickster move, a little juke to throw us off guard before proving, over and over, that he's still got the fire burning down below.