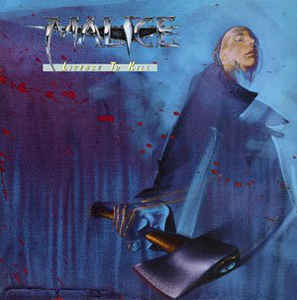 Provenance: Another present, either birthday or Christmas (one arrives hot on the heels of the other, alas), but not anything out of the blue. I had included this on some list or another. Why, I'm not so sure, but it's called License To Kill and the band's name is Malice, all of which is suitably metal.

Having said that, what a bait 'n' switch it is to call yourself Poison, a very cool name, only to dribble out crap like 'Unskinny Bop'. Any other examples spring to mind? If you were going solely on the cover art, you'd expect Molly Hatchet to sound like Manowar instead of workaday southern boogie. Meat Loaf falls into this category a little, doesn't he? Quite metal album art, songs that sound like showtunes.

Incidentally, if you're stuck with buying me a gift, an album or two always does the trick. Not hinting at anything, but yeah, just think about it.

Thank fuck, instead, that License To Kill sounds like a cross between Riot, Ratt, Y&T and especially Killing Machine era Judas Priest. In fact, on opener 'Sinister Double' I felt compelled to (sinister) double check the liner notes to make sure Priest main man Rob Halford didn't have a hand in any of the wailing. This is meant as nothing other than a compliment to actual vocalist James Neal (Halford is my favourite metal vocalist), and his performances throughout are consistently excellent.

More good news - License To Kill is fat free, coming in at a taut thirty-nine minutes-and-change; it's nine tracks of beefy heavy metal with nary an acoustic moment or prog flourish to be seen. It's a diesel-charged, palm-muted chuggathon with all the elements for a rollicking good time present and correct: sticky hooks, laser-cut guitar soloing and positively brobdingnagian power chords festoon the nine tracks on offer here.

If I could offer the most muon-sized criticism, it's that Malice, on the basis of License To Kill at least, sound so comfortable because they remind you of other bands you probably also like. I've already mentioned how close Neal cleaves to Halford in the screaming stakes; in addition, some of the guitar tones resemble those of Dokken's George Lynch; and there's a moment in the intro to 'Chain Gang Woman' where the whole package comes together to sound like vintage Motley Crue. (Incidentally, 'Chain Gang Woman' features backing vocals by Daves Mustaine and Ellefson of Megadeth fame, alongside Jaime St. James(!) and Jeff Warner(!!) from Black 'N' Blue(!!!!), and current Kiss guitarist / Easter Island head life model Tommy Thayer - wowza!).

The star of the show is the title track, 'License To Kill', which could have easily been one of the stronger cuts on Priest albums like Point of Entry or even Screaming For Vengeance. See what I mean? Even when praising them, I can't help but slip into comparisons with other, better known, acts. Failure to establish a distinct identity may have been what ultimately holed Malice below the waterline, because on the basis of License To Kill alone they should've been a force. Nonetheless, it's 2020 and here I am thoroughly enjoying the whip-crack riffage of 'Breathin' Down Your Neck', so by no means can we consider this enterprise a failure.

Frankly, any metalhead worth his, her or their salt should own a copy of License To Kill. It combines so many classic and recognisable aspects of what built the genre in the first place, and executes them with aplomb and no little flair. In addition, unlike many metal releases of the era, there's simply no filler to be found. Tight songwriting, good singing, good playing - what more could one want? Perhaps they could've upped the Black 'N' Blue quotient a little?

Lastly, I've just tweaked something in my neck nodding along to 'Breathin' Down Your Neck'. Irony aside, 'License To Kill' failed to injure me, so I'm declaring the former song to be the strongest joint on the album. That's how it works with metal - I don't make the rules! (But yes, 'Breathin...' is probably the better track thanks to its neat chorus and the fact that bits of it sound like a good UFO number.)