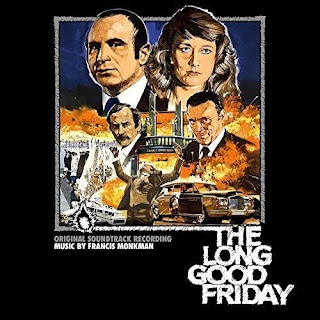 Provenance: Unlike most good movies, this one is going to be heavy on exposition. How I obtained the soundtrack to The Long Good Friday is simple enough - I bought it from an online retailer - but the journey leading to that point was somewhat longwinded. No fan of brevity I, so I'll indulge myself a little.

As a youngster I was an avid listener to late night radio. This initially meant falling asleep to the strains of oldies station Classic Gold (828 AM!), later graduating to Talk Radio (1053/1089 AM) before settling on BBC Radio Five Live (909/693 AM), a habit I continue to observe to the present day. My first encounter with the theme to The Long Good Friday was as the intro music to one of the Talk Radio presenters, whose name escapes me now. (I do recall, however, that James Whale used 'Junkie Chase' from Curtis Mayfield's Superfly soundtrack as his theme.)

At some point or another in my teens, I actually got around to watching The Long Good Friday, and I still recall registering the little jolt of surprise that it featured the Talk Radio music. Still, a good track is a good track, so I went to sniff it out at HMV, the only place pre-Amazon where I felt I had a fighting chance of getting hold of it. As it so happens the OST was in the dog-eared catalogue under the counter, so I ordered it, waiting a good two years for it to show up. Every time I went to load up on Joe Satriani or Bad Company albums, I'd enquire at the desk, and the same sad-eyed man in the scruffy polo shirt would tell me no, my soundtrack hadn't arrived.

And that, my friends, was that. I bought the DVD (one of about four films I physically own), have enjoyed the film a few times, recommended it to friends and then quite forgot about the soundtrack. Until, one day at work, I ventured an ill-advised Harold Shand impersonation, which opened the floodgates of my memory to the extent that the same evening I had found and purchased The Long Good Friday OST on CD. It arrived at my flat within three days.

As an aside, it's Easter Sunday and, hey hey, I'm doing The Long Good Friday. This is about the second time I've deliberately themed a review, not something I imagine I'll repeat in a hurry because I'm too lazy to look up birthdays, anniversaries, etc. Nonetheless, happy Easter.

Review: Before Amazon we had the HMV in-store catalogue (which to my mind, contained all the music worth owning); likewise, before we had Lock, Stock and Two Smoking Barrels we had The Long Good Friday. I like both films, but the latter is the far more accomplished and intelligent gangster flick. Starring Bob Hoskins, Helen Mirren and Charlie from Casualty, it's the story of mobster Harold Shand (Hoskins) attempting to cut a property deal with an American crime syndicate whilst, simultaneously, doing battle with the IRA after a botched money-drop.

It captures a fascinating time and place - Shand as an avatar of the dawning age of Thatcherism, trying to go legit with the redevelopment of London Docklands. Footage of the Docklands area, portrayed here as a grimy wasteland dotted with scrapyards and abandoned wharves is in itself a time capsule of a bygone age; the expensive flats and high-rise offices now on the site of riverine industry are not uncontentious in themselves. Here, fiction and reality intersect - watch this fascinating conversation between Hoskins and Barry Norman to see where the emotional nexus of The Long Good Friday originates from.

Final note about the film - whilst not in-depth, writing from Brexit Britain it's interesting to hear East End gangster Shand waxing lyrical about how London soon be considered the capital of Europe. Later, when the Americans get cold feet, Shand threatens to partner instead with "a German mob - the krauts!" and parts with the rejoinder, "what I’m looking for is someone who can contribute to what England has given to the world: culture, sophistication, genius. A little bit more than a ’ot dog, know what I mean?" All rather strange, given the desperation with which the government of the day has tried, latterly, to cosy up to President Trump, the very epitome of transatlantic crassness that Shand so derides.
Wait - isn't this a music blog?
So, to Francis Monkman's (he of Curved Air fame) original soundtrack - a tough one to review, because outside of the main title theme, it feels unfair to comment on music divorced from the images it was meant to illuminate. This is nothing like, say, the aforementioned Superfly soundtrack, which Mayfield wrote as an impressionistic commentary to the film's action. It's straight-down-the-line stuff for the most part, aside from a sticky reggae number that begins promisingly but falls down on an ill-advised - and poorly executed - vocal by Hoskins, here doing a Jamaican accent.
Having said all that, the incidental music is rather fun! Just like the main theme, many of the successive tracks combine keyboard and synthesizer with traditional instrumentation, a marriage that still feels fresh. Flutes compete with square waveform synths, slashing bursts of electronic static scythe through Philly soul string arrangements, all to great effect. There's the merest intuition that some cues have been taken from Mike Oldfield's Tubular Bells, but everyone borrows from everyone, so why fuss? The exception to this is a delicate, and quite beautiful, solo guitar piece called 'Sarabande in B Minor / Guitar Flamenco'.
Ultimately, it's Monkman's main theme I came for, and to this day it doesn't disappoint. Urgent, juddering synthesizers set the pulse of not only the track but also the ramping tension of the film, before everything is swamped with the exuberant blart of a showband horn section. Squidging (the correct technical term, I believe) these two disparate ideas together is a musical exercise in tightrope walking, but it works; the effect is electrifying. Crystal Palace used to run out to this music, don'tchaknow!
Don't worry about this OST - I needed to have it, a compulsion to right a (perceived) wrong of the past made me buy it. Instead, experience this music in its proper context by watching The Long Good Friday. You could even treat yourself to a 'ot dog or two whilst doing so - know what I mean?
Posted by AC at 11:42