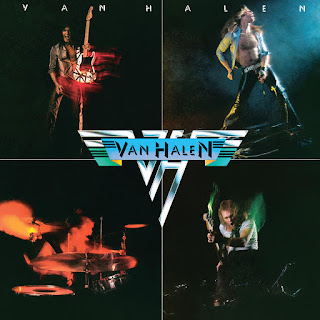 Provenance: One of those albums I felt I "had" to have as a rock fan, along with Boston's debut and Appetite For Destruction. Can you be a rock fan without listening to Aerosmith, Guns N Roses and Van Halen? Sure, but that's like being an English Literature scholar and dismissing the canon of Chaucer, Shakespeare, Dickens et al. There is a (sometimes) Dead White Men reading list for longhairs, and Van Halen is on it.

I bought this from Essential Music in Bournemouth, probably my favourite music store of all time (though Tower Records in Shibuya, Tokyo runs it close). Part of the fun was the perma-scowling proprietor, who would no doubt much prefer if we spent our money on the Smashing Pumpkins or the Violent Femmes, but had to seethe in silence as my friends and I kept bringing Metallica and ZZ Top jewel cases to his desk.

Review: The first couple of times I heard Van Halen, I didn't get it. Ask me now and I think it's not only one of the most important milestones in hard rock, but also an incredible listening experience. One of my favourite albums, for sure. However, the first few spins left me puzzled. Yes, it rocked, and the guitar work was phenomenal, but it seemed different in a slightly uncanny way.

Listening again, I can hear what confused the teenage version of myself; it's the tactile qualities of the sound, which was unlike anything else I'd hitherto experienced. Everything else I'd listened to had a kind of solidity to it that Van Halen lacks. Which isn't a mark against Van Halen - on the contrary, it's one of the more extraordinary elements to this album. We are talking about the late Eddie Van Halen's famous 'Brown Sound'. Whereas other electric guitar tones sound wiry, metallic and often harsh, here's a sound that is unctuous, splashy and warm. This was guitar as plasma - a shift from the earthbound, prosaic tones that had previously dominated, yet there was nothing unsubstantial about it.

Of course, this wouldn't be too much to write home about if it weren't for the fact that the individual wielding this space-age sound wasn't a virtuoso. I've had a good twenty years with Van Halen and it remains probably my very favourite 'guitar' album. Successors to the guitar god crown, like Steve Vai, Joe Satriani and Paul Gilbert may have been technically more accomplished, but none of them get close to the sense of freewheeling abandonment that EVH conjures up with his seemingly off-the-cuff pyrotechnics. As evidence, I would submit 'I'm The One', an up-tempo rocker kicked up a few notches from 'good' to 'outstanding' by the pop-eyed way Eddie wrangles his instrument, coaxing out ever more outrageous sounds with the most wild swing feeling to his playing. You know what it sounds like? A shit ton of FUN.

Speaking of which, that's another aspect to Van Halen that comes through loud and clear. Although the fabled Punk Year Zero had already happened by the time this platter dropped, many of the big stadium beasts endured. Fat, lazy and complacent, yes, but still lurching their way around the arena circuit, plying their constipated brand of blooz rock with ever diminishing returns. Above all else, these bands sounded altogether too serious, too pretentious by half - one gets the impression they'd not only sniff their own farts approvingly, but also recommend they pair nicely with a '68 DRC pinot noir.

Van Halen - and Van Halen - swept that all away. Of course, there were bands who understood rock could be a laff before Van Halen - Slade, Kiss, the Dictators, Alice Cooper - but something changed with this doozy. On top of a warmer sound, you also had the one-man party that was David Lee Roth, a gorgeous blonde apparition who karate-kicked and back-flipped his way through the live show. He might not have been the best singer around - hell, there's a case to be made that bassist Michael Anthony was the best singer in Van Halen - but even on record, he had the same spark evident in Bon Scott of AC/DC, which gave the impression that he was always having a grand old time.

An amusing part of looking back at Van Halen is seeing how critics at the time reacted. Fairly unfavourably, as it turns out! Robert Christgau, who couldn't review hard rock or metal to save his life, predicted Van Halen would go the way of Deep Purple et al into turgidity (which, whilst Roth was in the band, never happened), whilst another compares Eddie's playing with that of Jimmy Page or Joe Walsh. What the fuck? Okay, Van Halen didn't spring forth fully formed from the head of Zeus, but to put a trotter like Walsh next to EVH is so off beam as to be laughable. If we're talking antecedents, the big one for me is Montrose, which also did quirky and playful things with guitar, and the good-time sensibilities of 'Bad Motor Scooter' or 'Good Rockin' Tonight' would've fit snugly onto Van Halen (the beginning of 'On Fire' actually resembles Montrose's 'Space Station No. 5', to my old ears anyhow). You could also make the case that David Lee Roth was like a turbo-charged version of Black Oak Arkansas frontman 'Big' Jim 'Dandy' Mangrum, another flaxen-haired barnstormer who brought an aw-shucks charm to proceedings.

However, neither of those acts could've pulled off the feat of making bar-band stalwart 'You Really Got Me' sound so fresh and exciting, nor could they have dreamt of the headrush craziness of 'Atomic Punk'. Returning to the theme of 'fun', who else would've slammed down a composition like 'Eruption' on the table? This was, pure and simple, Eddie and the boys saying "can your favourite guitarist do this?", and the answer was, no, absolutely not. However, because everything is kept so light and breezy, the braggadocio and confidence on display make you smile - there's no side, no pretension, just four guys kicking out the jams.

One could, if gripped by a bilious mood, also point the finger at Van Halen as the inspiration of the many deep crimes committed by the hair metal genre. It's fair to say that without Van Halen, there wouldn't have been a slew of hair farmers finger-tapping their solos and squealing about havin' nuthin' but a good time. So what? Every important cultural artefact inspires a clutch of lesser imitators. Many tried, but none were able to match the gusto, the ambition and the controlled lunacy of Van Halen. I've enjoyed listening to it so much whilst writing this review, I'm skipping straight back to the beginning.