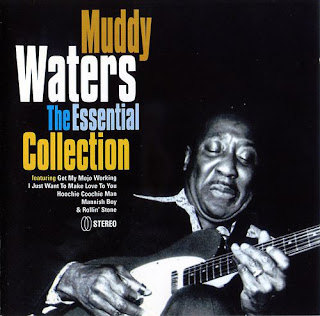 Provenance: A question to those of you who play musical instruments - when you first started to squeeze out some sounds, what were you attempting to play?

For me, on a Hohner Rockwood Pro RP250 (one of the heaviest guitars I've ever played, incidentally), it was blues music.

Prior to picking up the guitar I had no real regard for blues music, albeit the majority of bands I was listening to at the time played material heavily derivative of the genre. I had - have - no natural musical ability, as friends, bandmates and neighbours can attest to; furthermore, there is a fine balancing act to be performed when learning an instrument relatively late on, inasmuch as the frustrations need to be tempered with the green shoots of progress.

For me, that proved to be blues music - as my guitar instructor showed me, with just three chords and knowledge of the minor pentatonic scale, a beginner can sound halfway accomplished. It worked, and twenty years down the line I still enjoy the simple pleasures of improvising over the three-chord trick, especially as working within such strictures makes you, the player, focus on how you're playing, every bit as much as what you're playing.

So, as a newly-minted bluesman, the future king of the Stour Delta, I needed to do some homework. Boy, did I. I became that most insufferable of individuals, a teenage blues buff. Knowing, at the very least, who Muddy Waters, Howlin' Wolf and BB King were became something of a litmus test (though BB wasn't really my cup of tea, you see - a little too sleek and urbane for this adolescent purist!). I wouldn't even worry my fellow young millennials about the likes of Pinetop Perkins, Mississippi John Hurt, Blind Willie McTell and the rest, however - from my lofty perch, I simply couldn't imagine the hoi polloi were able to tear themselves away from the pabulum of Mogwai, Creed and Linkin Park and join me on the blues highway. Think of the worst kind of black metal gatekeeper, multiply by about six, and you've got me, the 17 year-old blues fan.

Anyway, I obviously had to start somewhere, and I think this followed hot on the heels of Stevie Ray Vaughan's Texas Flood (and there was me chaffing BB King!) as a formative blues purchase.

Review: Well, I suppose the first observation that needs to be made is that this album contains a good number of tracks written by the masterful Willie Dixon, performed by the legendary Muddy Waters, and backed by what is considered to be the greatest Chicago blues backing band ever assembled; Jimmy Rogers on guitar, Little Walter blowing harp, Elga Edmonds on drums and Otis Spann tinkling the ivories. That is, Little Walter of 'Juke' and 'Blues With a Feeling' fame, Jimmy Rogers, who popularised 'That's All Right' and 'Walkin' By Myself', and Otis Spann, who worked with Fleetwood Mac, Eric Clapton, Chuck Berry and John Lee Hooker, to name a few. None too shabby.

But here I am getting ahead of myself - I am already assuming you know these folks, and can nod along with these achievements. For the uninitiated, I'll say this - these guys were giants, backing a colossus.

I almost feel like ending it here and imploring you - ordering you - to hunt down Muddy tearing through tracks like 'I Got My Mojo Working', 'Baby, Please Don't Go', 'I'm Your Hoochie Coochie Man', 'I Just Want to Make Love to You' and 'Mannish Boy'. It's the kind of canned heat we should be blasting off to Mars and beyond, because if any space aliens found this shit they'd soon a) realise that we're not an entire waste of galactic space and b) give pause about invading us. It'd a pre-emptive strike, folks, and by hittin' em with the low smoke (to borrow a phrase from Joe Frazier) we might just survive unscathed.

For those of you unaware of the Muddy Waters experience, the man is one of those people - like Howlin' Wolf - who explodes out of the speakers, his singing an extension of his personality. And what a personality! He's already middle-aged by the time he's cutting numbers and heads with Chess Records, but that's entirely to his advantage - the swagger, the virility, the braggadocio is shot through with an effortless authority. His rough, soulful voice would be a great weapon regardless, but for Waters the blues wasn't about keening or moaning; no, for him it was a vehicle for boasting, for tall tales, for hairy metaphors, sawdust on the floor and guaranteed good times. Even when Waters is ostensibly playing the puppy-eyed wooer in 'I Want To Be Loved', it still sounds as if he's already got the hotel room booked and champagne on ice.

However, the rather bargain hodgepodge of The Essential Collection doesn't just focus on what is considered by critics to be his zenith; it also contains tracks from later albums, so we get two from his 'lions-in-winter' album Can't Get No Grindin'; and 'Mannish Boy' from his psychedelic effort Electric Mud, a collection that revels in a one-and-a-half star review on Allmusic but powerful enough a testament for Chuck D of Public Enemy to reassemble some of the session players to re-record the big numbers for a documentary (one I would love to see again, but cannot find online). There are some curios here, too, such as a solo performance of 'Rollin' Stone' and a 'She Moves Me' featuring label boss Leonard Chess accompanying Waters on bass drum with an almost majestic level of incompetence.

What more can I say? It's a 'best of', from one of the bests, whose electric blues was simply tougher, more raucous and, in the toss-up, more exciting than almost anything else going. I don't need to sign off with a 'buy this album' plea, just find any collection of his Chess recordings as a starting point and have yourself a ball.