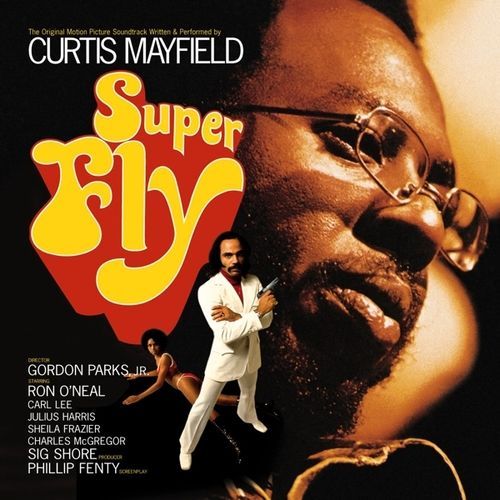 Provenance: Back in the 1990s, when I was in my early teens, I would listen to a late night show on Talk Radio hosted by an irascible fellow named James Whale. He would abuse his producer, wind up guests and hang up on callers - all of which I found amusing then but would probably annoy me now. (Not that national broadcasters give platforms to prissy, self-regarding hotheads these days.)

Anyway, the start of Whale's show was always heralded by a snazzy bit of music that I long assumed had been created by the station. One night, a stray comment from the producer (I seem to recall his name was Ash) revealed it was actually an incidental piece from the Superfly soundtrack - naturally, I had to hunt this bad boy down. Net result - I own this album. We didn't have Shazam back then, you just had to know things.

I stopped listening to James Whale around the turn of the millenium, but looking back his was quite a curious show. I remember Uri Geller being a fairly frequent guest, as was psychic medium Derek 'Kreed Kafer' Acorah, taking questions from listeners and pretending to chat with his ancient Ethiopian spirit guide, 'Sam', to get answers from the beyond the veil. As Acorah was, of course, consulting thin air this made for great radio, arguably every bit as edifying as the occasion where he had a televised conversation with a dog.

The only other salient memory I have of James Whale was an occasional joint broadcast with a US-based show hosted by a man called Tom Leykis, complete with awkward pauses and transatlantic time delays. I fondly remember the Whale show dropping back into the American broadcast in the midst of their commercials, which were the audio equivalent to taking a cheesegrater to one's ears. Good times.

Review: I came for the James Whale Show theme ('Junkie Chase', incidentally), but stuck around because this album is the real deal. A dull tapping in the back of my cranium suggests that this was the first 'funk' album I bought, and therefore the first I listened to front to back. Growing up our household's music collection was a strange mix of singer-songwriter and heavy rock (Mum), or a variety of rock flavours including classic, avant-garde and folk, courtesy of Dad. What we didn't have was any funk, and this album certainly wasn't what I had expected.

My limited exposure to funk led me to expect a four-to-the-floor, deep, bass heavy sound. And whilst this album has some supreme bass playing - just think of that immortal riff in 'Pusherman' - it certainly didn't fit my preconception. Curtis Mayfield kept it light, with imaginative percussion parts skittering and skipping beneath his high-pitched, plaintive singing. The most hard-driving track on here, and thus closest to what I had considered the funk template, is 'Freddie's Dead', but even then the chewy, minor-key riff gets caught up with the kind of celestial string arrangement one might find on Black Moses-era Isaac Hayes.

As it's the soundtrack to a film, the whole album sounds remarkably tight conceptually. Yet where the film is pretty ambiguous about drugs (Ron O'Neal stars as a coke dealer who essentially wants to make one big score before quitting the business), Mayfield's lovingly realised companion piece is certainly at the 'conscious' end of the scale. And when the socially aware messages are wrapped in such gorgeously realised songs, the consequence is an incredibly moving and - ultimately life-affirming - collection that easily stands alone from the film as a masterpiece.

Superfly also owns the distinction of possessing one of my favourite ever second sides of any album in my possession. Highlights including the cascading pianos on the sweet, anti-drug 'No Thing On Me' ("My life's a natural high / The Man can't put no thing on me"), and the glorious, driving title track, which starts off sounding like it's going to be the twin brother to War's 'Low Rider' before blasting off into a soulsonic stratosphere of its own.

A number one album in America - and a high of 26 in the UK. This, in a year (1973) when both Perry Como and Peters and Lee made the top ten album best-seller list, feels like something approaching a travesty.
Posted by AC at 14:33