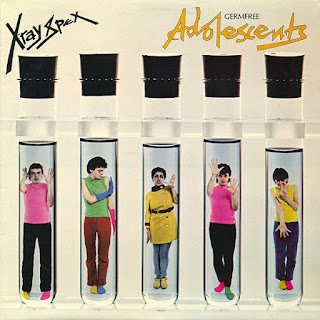 Provenance: I borrowed this album from a chap I worked with (alongside Crises by Mike Oldfield) and really enjoyed it. If memory serves, I loaned him Ted Nugent's Free-For-All. A fair exchange?

Review: I had no idea what I'd be reviewing today. I had noticed that I was on for a hat-trick of eponymous band names if I were to continue in the Van Halen / Santana vein, but I've already done Montrose and never quite plumbed the depths of owning a Bon Jovi record, so my options were limited. Would the Von Hertzen Brothers count?

Nonetheless, a tweet alerted me to the fact that today is the tenth anniversary of the passing of X-Ray Spex singer and bandleader Poly Styrene. I've wanted to do Germfree Adolescents for a while now, and here's the perfect excuse.

Beyond all musical considerations, X-Ray Spex were an important force in punk history; how many women of colour can you think of who fronted, or continue to front, a rock band? Now ask yourself how many of those preceded X-Ray Spex? Not many, I'd wager (well done if you remembered the existence of Fanny, though!). It's easy in retrospect to discern some of the more conservative elements of the first wave of punk music, and whilst it's fair to say that bands like the Slits and the Raincoats offered new templates for the role of women in music, it was still a pretty white caper. The transformation of Marianne Joan Elliot-Said into Poly Styrene mattered.

Of course, all of this would be dulled somewhat if the music wasn't up to snuff. Fret not - Germfree Adolescents is a thumping album,

Yeah, a little bit of the sloganeering is a bit dusty (but it's effortless to forgive when delivered with such youthful gusto), as are a couple of the production choices - what's with all those echoed song intros? Those are going to be the only two quibbles you'll hear in this review.

I love that it's a punchy thirty-five or so minutes long; I love just how chunky and solid the guitars are; I love Styrene's police siren voice; and above all I love, love, love Rudi Thomson's saxophone, a quirky choice of instrumentation for a punk band but one that pays off over and again. I've long been a sax advocate - forget the cheezy stuff from the 1980s, forget even my beloved Steely Dan, and think of how exciting it sounds in the Rolling Stones, or skronking away behind Frankie Lymon and the Teenagers, or when it cuts like a scythe through Roxy Music's 'Editions Of You'. In fact, that's what I'm feeling here, a lot of the time; just check out the ending of 'I Live Off You' for proof. Saxophone is also used to double the chorus melody of 'Warrior In Woolworths', one of the (slightly) more sedate tracks here, and it elevates the whole enterprise; so much punk music trades on being abrasive or energetic, but Germfree Adolescents retains those elements without compromising on being a bloody fine listen.

Those moments that are just smash-mouth rock music are, however, simply exhilarating. 'Art-I-Ficial' sounds like a missile launch, and 'I Am A Poseur' is what would happen if Motorhead incorporated a brass section into their ranks. It's easy, amidst the sturm and drang, to miss the lyrics being hooted out with such exuberance by Styrene, but closer inspection reveals how pleasingly surreal they are, bespeaking of personal alienation in an increasingly synthetic, consumer-oriented world. When Styrene fantasises about becoming Hitler on 'Plastic Bag', it's telling that after proclaiming herself "ruler of the universe" she sounds even more excited to be "ruler of the supermarkets".

Could such an album as Germfree Adolescents appear today? I think not. It's too guileless, too freewheeling and the product of too singular a vision to be midwifed in such an interconnected age. Someone in a suit would say "fewer songs about department stores, please", or a producer would try to 'fix' some of the singing or playing to make it more palatable through a laptop speaker. Never mind - what matters is that X-Ray Spex had day-glo boots on the ground at the right time, breaking down barriers with a gleeful, shack-shaking abandon. Safe journey, Poly Styrene.