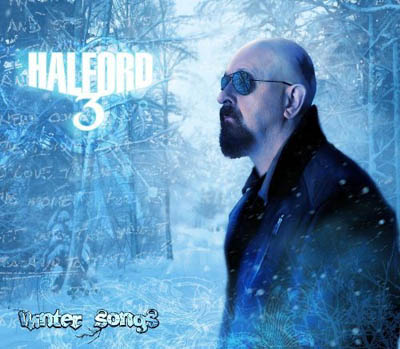 Provenance: It felt like everybody had some kind of yuletide album or another except for me. I tend to spend Christmas with my parents, who are well-stocked in this regard; this year the more shopworn 'classics' (I use the term advisedly) were sidelined in favour of festive traditional folk.

However, a few years back I was evidently feeling rather deficient in the seasonal spirit, resulting in me buying Halford's Winter Songs, thinking that some metallized Christmas carols would do the trick. I should state now that I normally find this kind of lark annoying; during a winter break in 2016 I was subjected to a Christmas tree in the town square of Manhattan, Kansas that pumped out seemingly unceasing shred-metal versions of 'O Little Town of Bethlehem', 'We Three Kings', et al. I would've happily slit the throat of any nearby reindeer by the time I was able to shuffle off for a well-earned Coors Light (the "World's Most Refreshing Beer").

That being said, my love of Judas Priest overrode my concerns and I made the purchase. I mean, how bad can a Halford album be? Crucible was fucking cool.

Review: I'm guessing that this is better than about 99% of Christmas albums, but that's because 99% of Christmas albums are unmitigated dross. You can't even get away with being hip and cool like Sia, because she did a Christmas album that's like an underdone goose stuffed with dried-up dog turds. In the service of equanimity I should also highlight that Winter Songs comes out of the traps like a three-legged greyhound with dysplasia. It's been a while since Rob's been able to hit those truly near-terrifying screams from his youth and yet he still seems obliged to give the ol' falsetto a bash on every release. Thusly 'Get Into The Spirit' features a vocal that, despite being triple-tracked to hide its deficiencies, still sounds like a poor parody of an actual Rob Halford performance.

But! Next we're onto a brace of traditional carols that have been given the metal treatment and - hallelujah! - these are cracking. 'We Three Kings' is much better than the version I heard in Kansas, and the relative rarity 'Oh Come O Come Emanuel' is an absolute rip-snorter. The carols on Winter Songs actually constitute, collectively, the best portion of the album. It's not as if Halford have done anything especially clever with the arrangements or twisted the lyrics around. Rather, they attack the songs with gusto, which is met with impassioned performances from Rob. Too often, Christmas albums sound like lazy cash-ins; to his credit, Rob Halford sounds like a man who genuinely enjoys the music. I would hazard a guess that he's a fine fellow to share a glass or two of eggnog with.

Now, I have long said that since Rob rejoined Judas Priest in 2003 they've had a knack for balladry. Whereas earlier Priest efforts were replete with vocal histrionics, the latter stuff has had to accommodate the timbre (and limitations) of a more mature voice. Happily, this still extraordinary voice has discovered a real feel for slower, stately material. In fact, I'd say that in this respect Rob has actually improved as a singer, imbuing such tracks as 'Angel' and 'Beginning Of The End' with palpable feeling. That magic is here again on the Sara Bareilles / Ingrid Michaelson track 'Winter Song'. Halford's version is a shivering, shimmering thing of understated beauty and genuinely capable of raising a few hairs.

Sure, there's the odd hokey track here and there - 'Christmas For Everyone', hello? - but overall Winter Songs is an admirable take on a deservedly maligned genre. Plus, it means that I don't feel compelled to buy any more Christmas albums. For goodness' sake, I've also got that one Jethro Tull album with 'Ring Out Solstice Bells', what more does one person need?
Posted by AC at 15:35