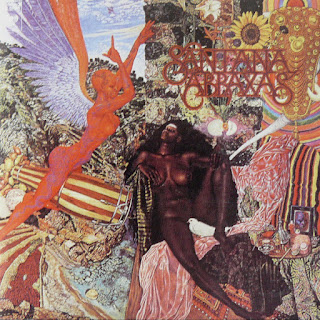 Provenance: If you ever slapped on a rock compilation or two, it was near-inevitable that you would encounter Santana's version of 'Black Magic Woman' at some point. A good song which stood out from the pack thanks to its sinuous Latin rock rhythms. In comparison, much else sounded altogether a bit 'meat 'n' potatoes'.

Around the time I was first trying to wrest a noise from a guitar my mum worked at a library, which meant that I'd get free access to whatever was on the shelf at the time. Well, one day that happened to be Santana's Caravanserai album, which I really dug. Again, it sounded like little else I had hitherto been exposed to.

So, when the chance came to purchase Abraxas (second hand) for a fiver, it felt like I was hardly gambling with my admittedly meagre earnings from my weekend job. That said, a fiver was big money back then (and still is, right?).

Review: When will Santana undergo the kind of critical re-evaluation that the likes of Fleetwood Mac and Steely Dan have enjoyed in recent years? Perhaps never; because although the two latter examples probably have stronger overall back catalogues, Santana remains tragically unhip. Yes, he became wildly popular again, for a New York minute, right around the turn of the millennium but even that unlikely comeback was tinged with snobbery. And since then, Carlos Santana hasn't helped his cause with a series of guest-packed, cover-heavy collections that have tried to ape the success of Supernatural with diminishing returns.

Perhaps it's time he engaged a business manager with a little more nous than the Archangel Metatron.

However, going back to the material that put Santana - the man and the eponymously-named band - on the map is a rewarding experience. Albums like Santana III, the aforementioned Caravanserai and today's subject - Abraxas - is to take a trip through some very groovy musical landscapes. The bald fact is that nobody had knitted samba, rock and psychedelia together so successfully, so organically as Santana, and arguably their early run still sets the standard. It also helps matters that Carlos had an instantly identifiable electric guitar tone and a facility with sustain techniques that gave his playing a rich, weeping quality.

Some of it also sounds resoundingly modern; the hypnotic bassline beneath windchimes and hand percussion of opener 'Singing Winds, Crying Beasts' could quite easily be pumping from the subwoofers as the dawn breaks over HawkFest or Bimble Bandada. Another aspect in Santana's favour is that the lightness of the percussion prevents this music from sounding lumpen in a way that, say, Cream or Black Sabbath sometimes do to contemporary ears. Even the lead guitar work hasn't particularly dated, in the sense that it frequently works in the service of the song and never disintegrates into the undisciplined wig-outs that were de rigueur at the time. Jeff Beck is a fine, very fine guitarist but how anybody can endure an entire Beck, Bogert & Appice album is beyond my ken.

Did anybody attending gigs in the 1970s really enjoy it when Deep Purple or Led Zeppelin took their audience on half-hour noodle odysseys? I would genuinely like to know.

Only three tracks, really, sound rooted in the distant past. Two of them - the acid-rock of 'Hope You're Feeling Better' and 'Mother's Daughter', I like a lot. They're the most straight-ahead numbers here, but with little imagination could be a Shocking Blue and Mountain tracks respectively (again, no bad thing in and of itself). The other one is 'Samba Pa Ti', which has fallen victim to its usage in one of those horrible, soupy Marks and Spencer adverts that turns food into softcore pornography. True, it's the closest to elevator music on Abraxas but along with Fleetwood Mac's 'Albatross', any charm it used to hold has evaporated through its association with pretentious nosh.

However, that does leave a whole heap of really strong material that still sounds fresh - slinky 'Black Magic Woman', the gang-chanted version of Tito Puente's 'Oye Como Va', the jazzy 'Incident At Neshabur' (a reference to Toussaint L'Ouverture and the Haitian Revolution, apparently) and the aggressive chord-stabs of 'Se A Cabo' all possess a sprinkling of magic. Incidentally, my Duolingo Spanish tells me that the latter should be called 'Se Acabo' ("it's over") - pero, es posible que estoy incorrecto! Anyway, Abraxas is great, a supple counterpoint to the chest-beating testosterock that was in vogue, and, like the band itself, is long due reappraisal.