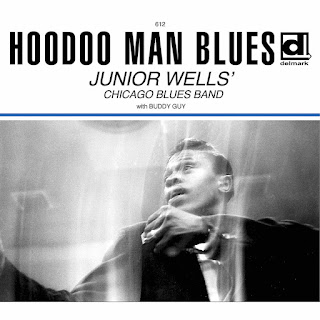 Review: As a long-time blues aficionado this album should be catnip, putting the spotlight on estimable harmonica-jockey Junior Wells, and featuring my close relative Buddy Guy as a sideman.

I have had more than one friend complain that blues music doesn't feature enough variety to hold the attention, and I can grok that. Formally, most blues music (with notable exceptions) follows a few set templates in terms of chord progressions, scales and even subject matter. How many times have you heard trains a-rollin' or a woman stepping out on her man?

That being the case, I think one of the keys to creating memorable blues music is the way you play the damn thing. Muddy Waters imbued his with an irresistibly sly boastfulness, Freddie King aimed for the bleachers with buzzsaw guitar soloing and Howlin' Wolf sounded like a one-man demolition team; seriously, his opening cry to 'Smokestack Lightning' sounds like a cave-in at a coal mine. Like any pursuit with a set of rules to be observed, the joy can be found in the manner with which the game is played, or subverted.

So now we come to Hoodoo Man Blues, the first solo album credited to Junior Wells. Already a veteran sideman, having replaced Little Walter in Muddy Waters' band in the 1950s, Wells assembled a crack band in an attempt to recreate the hot sound of an electric Chicago blues band. In doing so, he birthed a masterpiece, echoes of which could be heard in popular music for decades to come.

Firstly, it must be said that Wells is not the greatest vocalist around; he's probably not even the best singer in the band (that accolade, aka 'The Michael Anthony Award', going to Buddy Guy); but he was no slouch on the blues harp. It's a testament to the supreme level of musicianship that the whole confection was recorded in two days, and that takes into account amplifier issues that led Guy to playing some of his guitar parts through a Leslie organ speaker. Can you imagine that happening today? Ain't it wild that some bands, not too further down the line, would spend a week in the studio trying to capture a decent snare sound only to release a load of old pony?

As a consequence, Hoodoo Man Blues has an electrifying live sound to it. Stylistically it treads the fine line between sophisticated and tough (like the best Chicago blues does), Guy's lacework guitar sparking against Wells' rough-house harmonica. Which, by the way, isn't to say that Guy couldn't land a few stingers himself; a couple of his licks in 'Hoodoo Man Blues' and 'We're Ready' are as sharp and clean as a wet shave from a Turkish barber. I think it needs to be emphasised just how good the playing is here; pocket drumming, locked-in bass and guitar work that possesses the neatness of prestidigitation.

So how influential was this joint? The ripples can be heard in acts like The Paul Butterfield Blues Band, Canned Heat, Stevie Ray Vaughan, Rory Gallagher, early J Geils Band and, especially to my set of lugholes, Dr Feelgood. The combination of lean orchestration, musical adroitness and aggression would solidify (and perhaps, falter) in the blues-rock sound of the late 1960s into the 1970s; a good example is Ten Years After's supersonic take-off of the Wells' band's version of 'Good Morning Schoolgirl', which booms with a proto-metal heaviness but also contains the seeds of self-indulgence that would lead to dead-ends and sclerosis. None of that is evident on Hoodoo Man Blues - a smoky, punchy, vital testament.