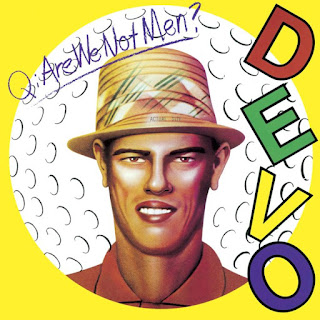 Provenance: Another one from my Toronto haul. But I've long had a liking for Devo, having owned a 'greatest hits' compilation for a little while now.

Review: I'm going to open this up by stating that I have always felt a little wrong-footed where Devo are concerned. Their absurdist aesthetic and 'zany' music initially persuaded me that we're dealing with some art-house aural commentators-cum-pranksters, along the lines of Frank Zappa or perhaps even Oingo Boingo.

However, on the evidence of Q: Are We Not Men? A: We Are Devo, I am convinced that this is a band who uses wackiness to conceal the fact that they're deadly serious.

Although part of the New Wave, Devo's roots pre-date punk and were initially buoyed by the artsy concept that humanity was regressing or de-evolving (hence the band name), a theme that surfaces every now and again on this album. In addition, founding member Gerald Casale was an eyewitness to the Kent State Massacre, where National Guardsmen opened fire on students protesting the Vietnam War, killing four of them. This is some quite heavy material for a joke band, no?

So here we have Q: Are We Not Men?, a title very aptly taken from H.G. Wells' The Island of Doctor Moreau and with an album cover sporting an image not of the band but an airbrushed image of the professional golfer Chi-Chi Rodriguez. The Moreau inference - the creation of animal-man hybrids - fit into the devolution thesis nicely, but golf? Perhaps its emblematic of a culture that is slowly amusing itself to death, the "good walk ruined" being a past-time of the rich, idle and non-productive members of society, sucking up precious resources to keep their wastefully large fairways verdant out in the Arizona deserts. I say all this as a golf fan.

So what does all this blarney sound like when put to music? Pretty great, actually.

My favourite thing about Q: Are We Not Men? is that it's constantly kicking against rock conventions, sometimes by omitting them entirely (overt displays of tasteful technique, emotive singing) but sometimes by warping them out of shape into new and uncanny forms. Take opener 'Uncontrollable Urge', which sounds like the Romantics' 'What I Like About You' with all the groove and swing taken out; in its place are jerky, sped-up rhythms and a singer hooting out 'yeah-yeahs' like a malfunctioning robot. The latter affectation is particularly striking, stripping away the grunts 'n' yelps of innumerable rawkers of any sense of verisimilitude and so amplifying the notion that what you're hearing is artifice, fakery; a sham.

Yet 'Uncontrollable Urge' also explodes out of the speakers despite its stiff-collared discipline, and there's a weird exhilaration to be found within the rush of its motorik rhythms (NB: Alan Myers was one of popular music's great underrated drummers, no?).

Devo repeat the trick on a brilliant deconstruction of '(I Can't Get No) Satisfaction', almost an ur-text of modern rock music, turning it into a jerky android tale of consumerist frustration, complete with babbled 'babybabybaby' chants in place of Jagger's Thames Valley bluesmannery. This, and especially 'Jocko Homo' (which has a kinda, sorta call-and-answer version of the album's title as the chorus), sound not too dissimilar to latter day Captain Beefheart, most notably Bat Chain Puller (Shiny Beast), where recognisable time signatures are thrown out in favour of undanceable and awkward rhythms that nevertheless somehow hang together. It's not easy to listen to, but it's a perverse kind of fun.

Yet how, in 2021, do we parse a song called 'Mongoloid'? It's about an individual with Down's syndrome, but the lyrics are clear that he leads an ordinary life. Devo are always playing tricks on us, though always with serious intent; is their point (very controversially) that modernity has presented wage-slave humanity with an existence that is so flattened that it really doesn't make any difference if its participants possess any kind of developmental disorder? Or is it a commentary on everyone living the western 'bring home the bacon' lifestyle, much as we might be described as 'normies' or 'sheeple'? Nonetheless, the song leaves a slight whiff of distaste, even if the meaning is a little cryptic. (Perhaps that unease was exactly what Devo were aiming to produce?)

Side two of Q: Are We Not Men? possesses some fairly hard-driving music, almost punky in its execution, with Mark Mothersbaugh's garbled hysteria powering 'Gut Feeling (Slap Your Mammy)', 'Sloppy (I Saw My Baby Gettin')' and 'Come Back Jonee', the latter being another dissection of rock 'n' roll, this time Chuck Berry's 'Johnny B. Goode'. Instead of seeing his name in lights, this titular Jonee cuts out on a woman and slams his Datsun into a truck, 'Detroit Rock City' style.

Beneath all the whizz-bangs and geekery, as mentioned previously, I detect something quite sincere. The subdural content of Q: Are We Not Men? is not light-heartedness or quirkiness but a deep cynicism and pessimism. It's a world of conformity, of angst and of the trauma done to the individual in a post-industrial world. By the same token, spontaneity, emotion and individual expression have all been snuffed out. The universe created by Devo on this album hardly smacks of 'hail fellow, well met' good cheer or merriment. It's bleak.

Maybe Devo lost their way a little later on by using the poetry of would-be Reagan assassin and current Twitter celeb John Hinckley Jr for lyrics? Or, say, when they teamed up with Disney to create a family-friendly version of themselves played by child actors called Devo 2.0? Perhaps these acts were taking Devo's almost nihilistic central theses to their logical conclusions? Perhaps they needed they money? Whatever happened to Devo since they first appeared - and yeah, they probably did soften up somewhat - the music that appears on Q: Are We Not Men feels like an articulation Futurism's proto-fascist politics crossed with a mangled version of Krautrock. Difficult, infuriating, ambiguous - and, at times, brilliant.