Best Of The Stray Cats: Rock This Town - Stray Cats 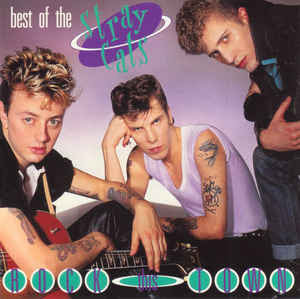 Provenance: Yet another from my Toronto haul. Never been a huge fan of Stray Cats but this was cheap and I'm partial to a little rockabilly now and then.

Review: Stray Cats fall into that weird category of purist revivalist music that saw acts like Sha Na Na and Showaddywaddy gain footholds in the culture at various times, despite no real explanation for it. True, the 1980s did see some of the OG rock 'n' rollers hit chart gold as their music was exhumed for movies and adverts; am I underestimating the power of nostalgia?

Unlike their near contemporaries The Cramps, Stray Cats play it straight. Which, on the one hand, is admirable, but on the other makes for a fairly monochrome listening experience. The vast majority of the tracks on Best of... are built from a foundation of bass, drums and guitar; I almost punched the air when, two-thirds of the way through, I heard a fucking saxophone. Oh, and Slim Jim Phantom (top tier name by the way) plays a drum kit consisting of snare, bass, hi-hat and crash cymbal, a minimalist approach that no doubt played well to the greasers and ensured no Neil Peart style histrionics.

This short, ten track compilation kicks off with the Stray Cats' most recognisable, and arguably best, song, 'Rock This Town', which is a genuine shack-shaker that makes all the right moves. The next track though - '(She's) Sexy & 17' (gender in parentheses, presumably so nobody gets the wrong idea) is a little noncey, in a Chucky Lee Byrd way. Also, two tracks in and I'm bored of Brian Setzer's weedy voice. I'm almost bored by his guitar playing, which trades creativity for period fidelity. Luckily, numero tres is a great doo-wop number called 'I Won't Stand In Your Way', which reveals that Setzer is much better playing the sap than the tough.

A shame, then, that a chunk of the Stray Cats oeuvre which appears here is predicated on them being a bunch of flick-knife wielding alley bruisers. Setzer's lapdog yelp doesn't cut it on 'Stray Cat Strut' or 'Rumble In Brighton', not even when backed up by his two goons, who look like they have acromegaly or rickets or perhaps both.

The collection reaches a nadir on 'Gene & Eddie' (that's Gene Vincent and Eddie Cochrane to you plebeians), a song that both quotes from and utterly mangles the work of those two doomed genii. It's the kind of concept I tend to despise, with the exception of ABC's 'When Smokey Sings' and maybe Nils Lofgren's 'Keith Don't Go' (depending on which way the wind is blowing at the time). Both hagiographic and tautological, just once I'd like one of these 'tribute' songs to give their subject a proper shoeing. Actually, Stray Cats shouldn't have bothered at all, considering that a few years beforehand, Ian Dury & the Blockheads had produced the far superior 'Sweet Gene Vincent', which deals with the legend in a much more interesting and playful way.

There's not a huge amount that's wrong with this, especially if you like wearing leather jackets, fashioning your hair like a duck's arse and pretending that slapback echo is the pinnacle of music production. Sure, at one point they nick a line from a Lazy Lester tune, but that's the business. Sometimes Lee Rocker walks up the neck of his upright bass, sometimes down it. Slim Jim speeds it up and slows it down. Brian Setzer plays his Cliff Gallup and Scotty Moore riffs with aplomb. The Best of... is a slick, adroit bit of graverobbing, which has its moments but is too in thrall to rock 'n' roll's golden age to be more than a curio.