Welcome To My Nightmare - Alice Cooper 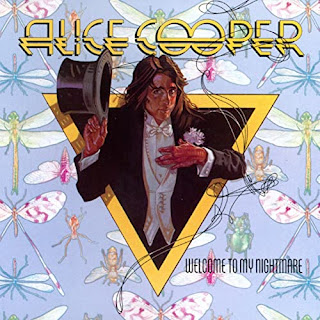 Provenance: I was already deep into my Cooper fandom by the time I got this album. A fandom, I should add, that my dad is directly responsible for.

Formative experiences with live music can be, if not always life-changing, then choice-affirming; I've mentioned it before but seeing Alice Cooper top a bill that included Orange Goblin and Dio was one of those instances where I felt everything clicked into place. I now own multiple albums of each artist.

Incidentally, I realise that I have yet to delve into the band Alice Cooper thus far on this blog, whose output many critics rate as superior. Guess what? They're probably right. Guess what? I don't care, this is my little corner of cyberspace and I'll happily keep on pushing the likes of Trans, Recycler and Chinese Democracy over and above more canonical works of those respective artists.

Review: Nobody's arguing the toss as to the position of Welcome To My Nightmare in the Cooper back catalogue; this ain't no DaDa or Zipper Catches Skin. Any Coop fan will have this in their collection, the only wrinkle being that this was the first record sans Smith, Bruce, Dunaway and Buxton. Which should be a big loss, as nothing else that I've heard to date has quite sounded like the original Alice Cooper band. Furthermore, if I was indulging in putting together a fantasy supergroup, Dennis Dunaway is probably the leading candidate in the bass slot.

But these are ruminations for another time! I'll hopefully get around to Killer and Billion Dollar Babies one day, which will give me ample time to blather about Dunaway; I wish no disservice to the bassists who actually played on Welcome To My Nightmare, Prakash John and noted rock slaphead / Chapman stick-botherer Tony Levin. Anyway, who's complaining about Tony Levin being up in your business? Not me.

Probably the biggest misconception about Alice Cooper is that he is a heavy metal artist. Yeah, he has been, now and again, especially when he relinquished the mantle of innovation to chase trends in a bid for relevance. Yet whilst there are elements of hard rock on Welcome To My Nightmare, if I may go all Jilly Goolden on you, there are also strong overtones of glam-rock, prog and even musical showtunes in the mix. In that respect, it's not so different from many other rock albums starting from the Pretty Things' remarkable S.F. Sorrow insofar as here is a version of popular music that is all grown up. Making the admixture of genres and influences come together to into a unified whole is a different kettle of fish, however.

I am happy, nay, gleeful, to report that Welcome To My Nightmare pulls off this high-wire act with aplomb. That the sequencing means we can bounce from the heavy riffing of 'The Black Widow' to 'Some Folks', which sounds like a demented twist on something from West Side Story, then onto the balladry of 'Only Women Bleed' - successfully - is testament to both the quality of the music and a kind of quiet internal logic holding it all together.

When I see Alice Cooper perform live, one of my favourite moments of the show is when he unhooks a set of supplementary 'arms' on his specially prepared jacket to signal the pummelling intro to 'The Black Widow', a genuine headbanger with a seasick bassline and weird lyrics about a spider-king that rules the earth. On record the effect is hardly diminished, and in fact it could be argued that this is the definitive version because it contains the lengthy spoken-word introduction, performed by the immortal Vincent Price. Truly, I feel a little kick of joy in my heart every time 'Devil's Food' begins to fade and I hear that lubricious, cartoon-sinister voice intone "Leaving lepidoptera - please don't touch the display, little boy...".

It's worth sticking with that trifecta of songs to reflect on 'Only Women Bleed' for a moment. In today's climate it seems like an impossibly clumsy song to be sung by a man, but behind the yuks of the double entendre lies an oddly tender song about the endurance of women suffering from domestic abuse. There has always been an intelligence behind Cooper's lyrics, something Bob Dylan has publicly acknowledged, but sympathetic takes for the victims of domestic abuse were rare in the era of 'wimmin'-dun-me-wrong' chest-beating mid-70s rock. Who else did something like this? Perhaps Cheap Trick with 'The House Is Rockin'', though they always had a knack of wrapping razorblades in bubblegum.

Anyway, not long after 'Only Women Bleed' is 'Cold Ethyl', a paean to necrophilia that landed him in hot water with the columnist Ann Landers. It also happens to be the best hard rock track on Welcome To My Nightmare, a song that Slash has claimed as his favourite. Catch me in the right mood and it's probably mine, too.

What comes after 'Cold Ethyl' is a succession of tracks that forms a mini-opera about an individual named Steven, who appears to be suffering from hallucinations, paranoia and a few other things. Whilst much of everything preceding has smacked of Grand Guignol fun 'n' frolics (bar 'Only Women Bleed'), the tonal shift to something edgier and darker makes this an uncomfortable listen. The tension, however, is broken by the album's final cut, the Kim Fowley-penned three-minute glam-slam of 'Escape', as bouncy and celebratory as it ever got for Coop. Still, the question lingers - is Welcome To My Nightmare a concept album in disguise? Has every musical turn and chicane been a wander through Steven's imagination? Does it matter?

When push comes to shove, these questions just add to the overall enjoyment of Welcome To My Nightmare. The fate of Steven is left unresolved, and so are my questions. I don't mind sitting with ambiguity, it doesn't feel like a cheat - especially if it's the price on pays to fully appreciate the five-star brilliance of this most colourful, sparkiest, imaginative artefact of 1970s rock.