Only A Lad - Oingo Boingo 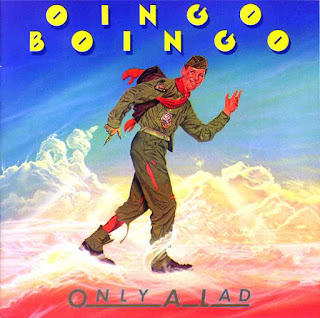 Provenance: Oingo Boingo were a personal recommendation made to me. After a little research of my own, I bought today's album, Only A Lad, and a later effort called Dead Man's Party.

Review: This is the full-length debt of a band with at least one member who would go on to do, shall we say, other things (I hesitate to use 'greater' in the usual formulation). Although a clutch of Boingo alumni would move into film and TV scoring, its vocalist and rhythm guitar player Danny Elfman whose work is the most immediately familiar. Aside from scoring many Tim Burton films (the best of his output, in my opinion, featuring in The Nightmare Before Christmas), there's also the small matter of the theme tune to The Simpsons.

All of which is totally banal and rather irrelevant, because aside from a predilection for quirky compositional choices, hints of the later career only surface sporadically in the sparky, pulsing New Wave rock on Only A Lad. It's a cool sound, too, marrying the punchiness of bass-driven pop with inventive horn charts, characterful vocals and dark humour.

And, oh yeah, they really 'go there' at times. By which I mean, if you're not familiar with the infamous lead-off track 'Little Girls', you might just want to apply some circumspection to the way you word your Google search. However, a lyric refracted through the twisted justifications of a (wannabe?) child abuser notwithstanding, it's a primo cut of Oingo Boingo; tense, claustrophobic, dancing on the edge of hysteria and yet grimly funny for all that. The video, which takes some of its cues from German Expressionism, is worth a shufti, discomforting as it is.

This isn't the only instance where Elfman and co. decide to shine a light into the murkier corners of society with a dash of irony and a catchy beat. The title track 'Only A Lad' is, if anything, an even better - and more excruciating - listen than 'Little Girls'; not so much the subject matter, which in this instance is a murderous child, but in the skin-tightening stress of the strangulated vocals and ominous electronics jabbing away at your cerebral cortex. Yet, once again, it's a corker of pop song.

These tiptoes into taboo represent the most transgressive material that Oingo Boingo cover, but that doesn't make the rest of Only A Lad easy listening at all. Much of the album concerns itself with feelings of isolation, a sense heightened by Elfman's hyperactive, madcap delivery. So we have 'Capitalism', dripping with irony and sounding like Duane Eddy crossed with Devo; the stuttering rhythms of the bouncy paean to alienation that is 'On The Outside'; and a deconstructive take on the Kinks' hoary old garage band fave 'You Really Got Me', with vocals that prefigure Eiffel 65's 'Blue' by almost two decades. In fact, it's in the midsection and coda to 'You Really Got Me' where you can, with finely-tuned ears (pay attention, children!) hear a nascent sound that would soon be fully realised and parping out of a billion TV sets to herald the start of a Simpsons episode.

A criticism I have seen about Oingo Boingo, and specifically about Only A Lad, is that they too often favour a 'kitchen sink' approach to production and arrangement, throwing all kinds of wacky sounds and whiplash tonal changes into the music. I don't get it. The only time I think this holds some validity is on closer 'Nasty Habits', although I would argue that the bells and whistles suit the knockabout atmosphere. Otherwise, Only A Lad shares some of its sensibility with Talking Heads, Discipline-era King Crimson, The Tubes, Japan and a few others who were unafraid to fill their records with discordance and interesting sounds without sacrificing the ability to write a tune.

Yes, Tin Pan Alley this ain't - you'd be pressed to whistle too much of this, despite the catchiness; at times Elfman's vocal acrobatics can produce a faint ache behind the eyes, but the commitment to his role of a manic lord of misrule is almost actorly. Spoiler alert: the spikier edges are sanded away on later releases like Dead Man's Party (albeit, it's an interesting album in its own right), but for the quintessential Boingo, look no further than this kaleidoscopic circus of raw nerves, high anxiety - and quality music.