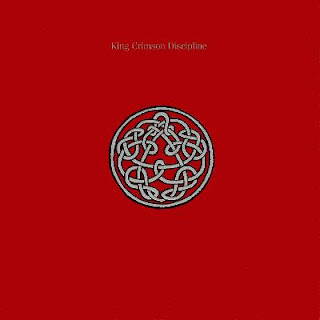 Provenance: I volunteered at Reading Festival in 2003 (I realise you're all clamouring to know whether I saw Sum 41 - the answer is yes), and my friend Simon, with whom I was camping (next to members of Linkin Park's extended entourage, some guys from the Datsuns and a former Deep Purple roadie) told me about a record fair that was taking place in the leisure centre next to the festival site.

Desperate to get away from the wretched swine who hemmed me in day and night, I readily agreed with Simon's suggestion to slip away for an hour or two.

I hadn't intended on buying anything, but that's been the perennial bleat I've made every time I've exited from a music shop or bookstore laden with purchases. Anyway, I kept my 'discipline' here, and bought a single album - King Crimson's Discipline(!), influenced jointly by my dad owning In the Court of the Crimson King and having seen the Discipline line-up on a Fridays rerun. They sounded pretty cool, and they had an odd looking fellow playing a Chapman stick. Sold!

Review: When I was growing up in Bournemouth it had a reputation as a place to go once you've given up on life; later on, thanks to the proliferation of clubs with names like Wiggle, Bliss and Toko, weekends in the town became one long bacchanal, if such revels solely consisted of guys in Ted Bakers getting in paggas at taxi ranks and driving modded hatchbacks very slowly around the 'Westover circuit'.

What was never apparent about Bournemouth in those days was its status as an incubator for many a prog-rock superstar. John Wetton (King Crimson, Asia), Greg Lake (Emerson Lake and Palmer) and Robert Fripp (King Crimson) all met each other at Bournemouth College, whilst the Giles brothers (King Crimson) were also local. During my late teens, quite a few then-current / former members of Hawkwind (honestly, they probably couldn't tell you whether they were in the group or not) used to hang around a pub I would frequent, and my mate Max and I would receive semi-regular thrashings on the pool table from these erstwhile psychonauts.

This should mean nothing when it comes to a sober appraisal of Discipline, but my take on their output is tempered with a small but significant - and no doubt idiotic - dose of hometown pride. We had sticky clubs pumping out DJ Otzi megamixes, a shite football team and our most famous residents were Max Bygraves and Jimmy Savile. King Crimson, at the very least, had a degree of credibility, even a touch of mystery - bandleader Fripp was a retiring, elusive presence, and their version of prog left no room for flummery or whimsy. To those of us of sound mind, pop music can't really hurt you, but for my money King Crimson's Red is about as unsettling and scary as the genre can get. Cool!

But Discipline is not Red. This is King Crimson meets Talking Heads, heavily influenced by the new wave and self-consciously arty. However, Robert Fripp is undoubtedly one of the more cerebral guitar slingers out there, and for Discipline he recruited other guys who weren't exactly slouches in the brains department either - Adrian Belew (guitar, vocals), Tony Levin (bass, Chapman stick) and the incomparable Bill Bruford on drums (the single holdover from King Crimson's previous studio album, the aforementioned Red). This adds up to an arch, clever-clever group of musos with the chops to pull off some complex ideas.

Two things at the outset - first, these guys can't sound convincingly playful. Not even wacky old Adrian in his pink suits can escape the po-faced pomposity of some of the subjects that Crimson tackle. I'm not expecting the kind of winking bawdiness that AC/DC do from King fucking Crimson, but even lighter themes are turned into somewhat byzantine word-and-rhythm games. I don't think anyone has ever referred to King Crimson - any line-up of King Crimson - as 'the lads'. The second point, slightly adjacent to the first, is that everything on Discipline is highly technical, highly strung and very buttoned up. Nothing on Discipline sounds at all organic (probably by design, given the name), so one has to be in a certain frame of mind to enjoy it. This isn't music to relax to - quite the opposite - it's tense, itchy, uncomfortable. This latter issue isn't necessarily a criticism.

In fact, when it comes together, Discipline is a marvel. For all that they've sacrificed any notions of looseness or vibe for technical ecstasy, the personnel involved mean that the level of playing is simply dazzling. Bruford is the standout for me, conjuring up polyrhythmic patterns of rare power and drive. I reckon an album solely of Bruford's contributions would be quite listenable. The word genius is tossed around a lot when a simple 'very good' would do, but he's worthy of the mantle.

Elsewhere, the strength in Discipline lies in the sheer range of weird and wonderful sounds the rest of the band coax from their instruments. For example, on opener 'Elephant Talk', some clever sod has got their guitar sounding like a pachyderm's trumpeting; and instrumental 'The Sheltering Sky' features a slew of guitars that have been pushed to their outer limits. Here, the effect is sometimes shrill and uncanny - but on the gorgeous, aching 'Matte Kudasai', the weeping violin effect is mesmerising, elevating an already plangent tune to greater depths of sensibility.

And where necessary, in between the Afrobeat guitars and paradiddles, King Crimson can still muster up a mighty roar. The first instance that the heavily overdriven guitar kicks in during the chorus of 'Thela Hun Ginjeet' is a startling, even overwhelming moment - so all-consuming is the sound that it knocks the wind out of the other instrumentation and almost takes on a physical dimension. Mostly the jump scares are absent, though it really doesn't matter whilst the arrangements ping and whizz around in a dizzying, whirling, triumphal demonstration of what happens when pure ability is harnessed to a singular, iron will. Discipline is whip-smart, deadly serious, a little pretentious - and perversely, a lot of fun.

Oh, and Blur were absolute pony at that year's Reading Festival. I gave up and went to watch Billy Bragg instead.
Posted by AC at 11:57