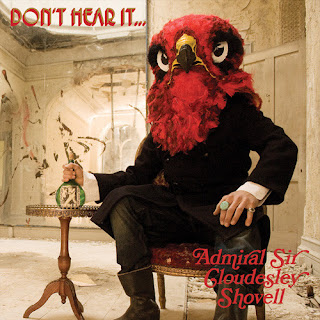 Provenance: The band with the best name in the biz!

After moving to the south coast from London, all on my lonesome I went to my first gig in my new environs to see Orange Goblin at the Haunt. Admiral Sir Cloudesley Shovell were the support act, and they kicked my ass.

Anyway, it turns out that 'the Shove' are a local band, plus I share a rather tenuous connection with bassist Louis Comfort-Wiggett (which I shan't reveal here - small world 'n' all, especially online), so I've subsequently got to see them a few times since. They kicked my ass on those occasions, too.

As for Don't Hear It...Fear It!, I bought this either at the Goblin gig or shortly thereafter via Rise Above Records, undefeated as the coolest label out there.

Support your local bands, even if they're not as tuff as Admiral Sir Cloudesley Shovell.

Review: As I am wont to do, I shall describe the sound of Shovell, a band you may not have heard of, by comparing them to another bunch of bands you also may not be familiar with. Suck it up, you knew the deal when you came here. So, here's a name I certainly haven't used before - Stack Waddy! And, let me see, I reckon there's more than a soupcon of the Groundhogs (Split era) in there, plus some Edgar Broughton Band, Budgie, a bit of Atomic Rooster and a whole smorgasbord of bands simply too hip to ever break through that you'll nonetheless find on the peerless Brown Acid compilations.

What I'm getting at, rosy-cheeked reader o'mine, is that Don't Hear It... is a distillation of all the things I love about hard rock - evil vocals, slammin' riffs, doomy lyrics and generous use of phase effects. It's right in that sweet spot of nascent heavy metal and come-down psychedelia, located somewhere in the dusty cracks between Black Sabbath and the wailing space-distorting stylings of Robin Trower. It's heartening that right here in the 21st century there are still people like Louis and the band's fret-mangler Johnny Gorilla maintaining such noble traditions.

(And, if I make this sound a little like Ewan MacColl's Critics Group, why the hell not? Pretty much half of what they purported to be 'authentic' folk had existed for less time than the heavy metal rama-lama that Shovell put out. If any British tradition is to be celebrated, let it be our contributions to making heads bang the world over.)

A very pleasing aspect to Don't Hear It... is the production, which is as raw as a scraped knee in November. Finger in the air, I'd guess that vocals and solos aside the band laid down the tracks live in the studio. Given the vim and vinegar in the music it certainly sounds that way, and if I've had my pants pulled down on that front then fair play; however, few contemporary albums achieve this kind of loudness without a horrible amount of compression. Don't Hear It... has a real heft to it, and the volume feels more akin to being trapped in the guts of a blast furnace than it does to some prick pressing a button on a laptop.

It almost feels pointless to highlight any one track to recommend above the others, as Shovell have bowed to the wisdom of elders in the best way by actually producing an album. Not just a collection of songs, but an album, one that actually pays attention to sequencing, much in defiance to the shuffle generation. However, blunderbuss to head, I'm going to plump for 'Red Admiral Black Sunrise', a perfect encapsulation as to what Admiral Sir Cloudesley Shovell are all about.

One final thing to say in summation - fuck you, guys, for doing that 'hidden track' thing at the end of the CD. Not because it's inherently annoying (though, it is) or that the track is bad; rather, I just about shit my pants every time the album comes crashing back into life after minutes of dead air. At home, fine, but sometimes I'm in control of a motor vehicle when this happens. My message to the Louis, Johnny and Bill Darlington (or Serra Petale, if you're still pulling these japes) - you wouldn't want to be responsible for a multi-car pile-up on the A27, right?