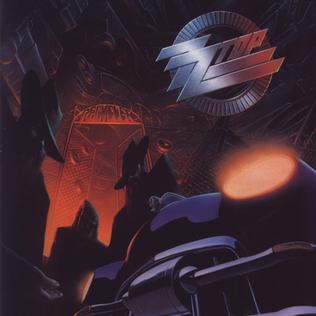 Provenance: When I was in my teens my mum worked in a local library. Every now and again she would bring home a cassette tape that had been removed from the collections because they had some minor damage (but were otherwise listenable). One such tape was ZZ Top's 1990 album Recycler, and if I recall correctly there was a second or two worth of 'Burger Man' that had been chewed up. I found this tolerable.

Review: This is a peculiar one, because I find Recycler - as a collection of music - to be a mildly entertaining rock album. However, in a wider context, this could be the madeleine cake of my mid-teen years - a time where I played football everyday, played computer games with friends whilst sat on inflatable chairs and dreamed of one day being able to play '20th Century Boy' on guitar. Recycler may be a strange avatar for a very happy time of my life, but it's impossible to divorce the music from the moment, so attempting anything like a fair-handed stab at a review is unlikely.

A constant and welcome part of my life at the time was my pal Chris, who lived down the road from me. We walked home from school together, played in the same Sunday league side, and would watch WWF wrestling - followed by VH1's rock show - round his place on a Friday night. I'm dragging Chris into discussion of this album, because at the time he was probably the world's biggest Metallica fan, a band I can't help but think of when considering where ZZ Top were in their career when Recycler was released.

Firstly, ZZ Top and Metallica both enjoyed early acclaim with distinctive genre albums - Tres Hombres and Deguello for the former, Kill 'Em All, Ride the Lightning and Master of Puppets for the latter. Both then made a big play for commercial success with idiosyncratic and innovative-sounding albums that alienated the hardcore but scored big on sales - Eliminator for the Top, Metallica for, well, take a guess. On that basis, in terms of popularity and career trajectory, Recycler is ZZ Top's Reload. Even the names are faint echoes of each other. But is that fair?

On the one hand, Reload doesn't contain anything like one of my top five Metallica songs, but I'm an absolute sucker for Recycler's lead-off, 'Concrete And Steel'. As a statement of intent, it's a doozy - slabs of guitar, throbbing bass and a fat, chunky sound, the aural equivalent of a coal-rolling monster truck. And it's not that 'Lovething', the next song, is too bad either, probably because its electro-chug hasn't quite worn out its welcome. Unfortunately, that can't be said for succeeding tracks, with ZZ Top wedded to the sequencer to such an extent that you're dying for some kind of rhythmic variation. It's a straight four to the floor, mostly mid-paced (yes, they speed it up! And slow it down!) and devoid of any frills or, indeed, fills. I'm not expecting a polka or what-have-you, but would it have killed them to have done something in shuffle time?

The overall effect is that Recycler becomes a bit of a trudge. With such little variation in either conception or execution, I find that an album central to my formative years is inescapably, and regrettably, a bit boring. Yet I played the shit out of this.

There are tantalising glimpses of an album that is much better than the Recycler that saw the light of day. 'My Head's In Mississippi' is a nasty boogie pitched somewhere between George Thorogood's 'Bad To The Bone' and ZZ Top's own 'Tush', but lacks both the dirt and vitality that drive those two - superior - precursors. 'Burger Man' bounces along nicely enough but is full of lazy, crap innuendoes neither inventive or weird enough by ZZ Top's standards to pass muster. '2000 Blues' sounds like another run at the formula that worked on Eliminator's 'I Need You Tonight'. Again, whereas the earlier track was a slow-burn, neon-flecked ode replete with sadness and regret, '2000 Blues' is just a slow song featuring some Miami Vice blues-bends.

At least the album finishes on a high - we're at 'Doubleback', and it sounds like the guys have snapped out of a collective bout of somnambulism. It's the cousin to 'Concrete And Steel', and has a real humdinger of a chorus, even if it doesn't quite carry the same heft. However, common with all the tracks on Recycler, is that there's not a single memorable Billy Gibbons guitar solo. Gibbons is one of my favourite stylists on the six-string and, especially during the 1970s, would squeeze out some of the smuttiest, sleaziest sounding lead breaks. He had the best guitar tone, too. The best. Here, it's dulled, processed, covered up with whizzbangs and altogether too mannered for it's own good. This element of the music alone stands as an avatar for my wider impressions, which is that Recycler represents both a missed opportunity and an inability to exploit what made ZZ Top so damn listenable in the first place.

Still a hundred times better than Reload though.
Posted by AC at 14:15