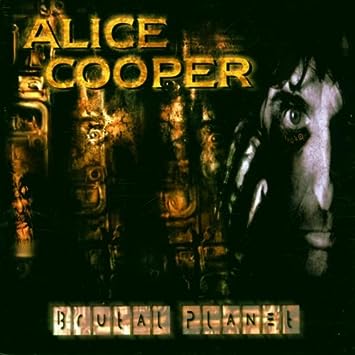 Provenance: Today is my Dad's birthday, so it's only right that I look at an artist I wouldn't have listened to were it not for him. From single albums to entire genres, my Dad has influenced my listening habits more than he probably realises, and for which I'm eternally grateful. That being said, I don't think I'll ever be receptive to the charms of Peter Skellern.

I first saw Alice Cooper on the Brutal Planet tour, headlining a show that featured Dio and Orange Goblin as support. I went with my brother and some friends, we all put the makeup on and had, oh, about the best time ever.

Review: We all know that Christian rock sucks, but what about when it doesn't? I'm not talking about pabulum like Stryper, who when a couple of friends saw them in London, threw yellow n' black bound versions of the New Testament into the audience for their encore. To Hell With The Devil? Give me a break.

For a rock fan whose teenage years fell around the turn of the millenium I was curiously averse to the charms of nu-metal (alongside those of Peter Skellern, of course). Some of it sounded raucous enough but the poses were a bit too studied, a bit too tired, and furthermore exponents like Limp Bizkit seemed simply idiotic. And yet here I am, thoroughly enjoying a Christian nu-metal album. Aha, I bet you didn't see that coming!

One has to respect Cooper for the way that this preacher's son has managed to maintain his rock credibility despite openly professing his rebirth as a Christian. He's never explicitly stated he avoids performing certain songs from his back catalogue, unlike W.A.S.P.'s Blackie Lawless (another born-again Christian) has done. He's still the guy who gets guillotined, electrocuted, tied up and beaten every night. And as a consequence he's managed to sneak out a couple of Christian rock albums without anybody really noticing.

Brutal Planet's first song (and title track) is pure 2000-era nu-metal, a thick, down-tuned chug; what distinguishes the track - as with much of Coop's output - are the hooks. For a fairly limited vocalist Cooper has a real facility with melody; and whilst his voice isn't the most gymnastic, he possesses one of the most characteristic sneers in rock music. It's loud, aggressive, bleak and has a big chorus - not a million miles away from what Rammstein were doing at the time. What makes it even more interesting is that "Brutal Planet", and many other tracks on the album, wink at his back catalogue.

Back in the latter days of grunge Cooper released The Last Temptation, a loose concept album that circles around a putative Faustian pact. It was replete with Biblical imagery around temptation and redemption, a strange and heady collection of somewhat disparate songs. Brutal Planet is the opposite - hard, unremitting, dark but identifiably a sequel to The Last Temptation. Both the title track and "Gimme" reprise the Faust theme (the latter even namechecking a ...Temptation track), but there are no saints being resurrected in this particular version of the world. Rackety pounder "Sanctuary" similarly follows on from Last Temptation's "Lost In America"; here, our anti-hero has grown up, got his house and wife, and has found his confusion supplanted by hatred.

However, as this is Alice Cooper, there are moments of levity. "Wicked Young Man" sounds more like a celebration than a condemnation, and it's tough to be too serious on a song that contains the lines "I've got every kind of chemical pumpin' through my head / I read Mein Kampf daily just to keep my hatred fed." Then there's "It's The Little Things", essentially heavy metal update of Carl Perkins' "Blue Suede Shoes" with added 'roid rage; fun all the way, with a couple of cute callbacks to "Welcome To My Nightmare" and "No More Mr Nice Guy" for the greybeards.

Yet in "Wicked Young Man" there's a chilling reference to school shootings, and the title track contains a jarring mention of the Holocaust. Perhaps Cooper grew a little tired of his reputation as a schlock merchant, because "Pick Up The Bones" is genuinely grim and disturbing trudge through the aftermath of a massacre. "Take It Like A Woman" is another one that looks backwards, this time to "Only Women Bleed". In concert, Cooper performed both songs together, segueing from the older song to its modern counterpart, and I think this is the best way to appreciate "Take It Like A Woman." "Only Women Bleed" was itself a bit of an outlier - in an era when rock artists were mainly writing about women as lyin', cheatin' objects of lust, Cooper crafted a rather quiet - and sad - paean to those in abusive relationships. "Take It Like A Woman" is more bombastic but continues to lament the enduring status quo of violent, insecure men and stoic women. It may not be the most sophisticated stripe of feminism but a bitter reminder that Cooper is one of the few mainstream men in rock with the ability to write sensitively about domestic abuse.

So then we reach the album's kiss-off, "Cold Machines" - and even for an artist who often makes hay with prevailing musical trends, this is a cheeky one. It's straight out of the Marilyn Manson playbook, recreating that odd mechanical piston-swing that was so identifiable in Manson's best work. It's probably the best thing on Brutal Planet too; huge guitars, chewy hooks and a chorus that simply soars. It's exhilarating, swaggering, and over all too soon. That Coop ripped off Manson so brazenly was, I suspect, a knowing little nudge aimed at the guy who took Cooper's schtick and repackaged it for angry kids who liked to stay in their bedroom.

There's the likelihood that my perception of this album is coloured by the fact that the Brutal Planet tour was the first of perhaps ten occasions I've seen Alice Cooper. He's never, ever disappointed, but the first time is something special, right? He knocked it out of the park that night in Bournemouth, and the Brutal Planet songs sounded monstrous. It's become impossible to rule on Brutal Planet without recalling the pleasure and excitement of that first gig, so why should I bother? Brutal Planet rules.
Posted by AC at 12:13