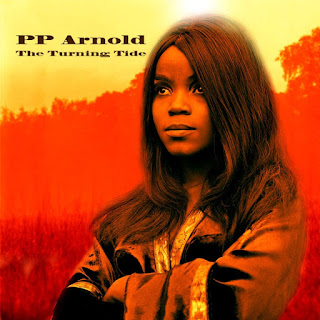 Provenance: An interview in the Guardian set me on the path to buying a copy of The Turning Tide. This was meant to be Arnold's third album, but having been recorded in the late 60s and early 70s it languished in the vaults until issued by Kundalini Music in 2017.

It's not just that PP Arnold was - and no doubt remains - a fantastic vocalist who could do powerhouse bombast and quiet intimacy with equal success; this album is stacked with talent. Alongside Barry Gibb, who produced and wrote a number of the tracks, there are performances by Caleb Quaye, Eric Clapton, Bobby Whitlock and Rita Coolidge, Bobby Keys plus a squadron of crack session players.

There's a good chance I'd have bought this album anyway, given all the hands involved, but The Turning Tide's status as a 'lost' album lends it that extra gloss of curiosity that makes it impossible to resist. Sometimes, the mere idea behind an album amplifies it as more than just a collection of songs; the trauma behind AC/DC's Back In Black (excellent album), the teeth-pulling pursuit of technical ecstasy that went into Steely Dan's Aja (excellent album) or the sad documentation of a mind coming apart at the seams as on Skip Spence's Oar (one of the most uncomfortable listens out there).

Review: Apparently, we have former Bee Gees manager, the late Robert Stigwood, to thank, at least in part, for stalling the release of The Turning Tide. I would submit that anyone who heard Arnold's pulsing interpretation of of Traffic's 'Medicated Goo' and decided it was not up to snuff needs their ears syringed. Support for this assertion comes courtesy of the fact that Stigwood was the producer responsible for the execrable Saturday Night Fever and Grease films.

It is as a conduit for the writing efforts of others that Arnold primarily appears on the album, although two of her co-write efforts with Quaye, the soaring ballad 'If This Were My World' and the dewily idealistic 'Children of the Last War' are real highlights. The full range of Arnold's talents are made apparent on the Gibb number 'High and Windy Mountain', which begins as a fairly nondescript soul-inflected soft rocker and mutates into gigantic beast propelled entirely by Arnold's astonishing - and frankly, scary - vocal power. For good measure, the trick is repeated on 'Bury Me Down by the River'.

Maybe - maybe - what counted against the The Turning Tide was that it undoubtedly looks backwards, towards a time of lush arrangements and voices spilling over with melodrama. Comparisons with Ivor Raymonde's arrangements for artists like Dusty Springfield, the Walker Brothers and Kathy Kirby are apt. And perhaps it was this polish and care that meant it fell between the gaps, awkwardly out of synch with the glam-stomp, prog meanderings and bedsit folk that was starting to poke through the crazy paving at the time. Arnold's cover of 'Spinning Wheel' is a sizzler, but was there any call for it come the early 1970s? And whilst the version of the Rolling Stones' hardy perennial 'You Can't Always Get What You Want' is certainly in the top division of attempts, it must have sounded old hat, even then.

Am I allowed one last little dig? When every song is a towering blancmange of emotion, one wishes for a track to come along to give proceedings a kick in the pants. 'Medicated Goo' is the most lively in that sense, but it's the first track; a couple more uptempo numbers sprinkled hither and thither would've been welcome.

Look at me, though, what an utterly ungrateful little piglet I am! I'm writing this in 2020, so what business do I have making lazy assumptions at was in or out in a period I know mostly through Hollywood and my album collection. I wouldn't even make my debut on Spaceship Earth for another decade-and-a-half, so I should just shut my trap and enjoy the fact that The Turning Tide is even available, and sounds this good. An assessment, which, by the way, takes in every aspect of this album; I understand it was cleaned up somewhat from the original masters, yet every track possesses the soft glow of care and craft that went in to so much recording of 'throwaway' music of the time. Pretty much everything recorded in the last twenty-five years sounds dog awful in comparison.

Nobody with my haircut can lay a plaint about anything with a hint of the retrograde about it, so I will leave you with this - Gibb's knack for tugging on the heartstrings is almost unparalleled, the music is cool and classy, and above all other consideration, Arnold is a singer of preternatural talents. Is there anything else gathering dust in the vaults, one wonders?