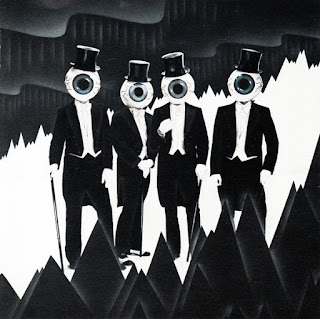 Provenance: My first exposure to the Residents came through the written word. I did not hear anything of theirs - consciously at least - until I was pushing copies of Commercial Album, Third Reich and Roll and Eskimo into my CD player. It's all quite shocking, and I recommend it.

What drew me to the Residents was their impishness, their experimentation, their readiness to subvert accepted conventions of recorded music, and not least of all, their anonymity (I am a sucker for artists who conceal their real identities, even if in one or two cases they have a very good reason to do so).

Another experience, quite apart from music or even music journalism, drew me towards Eskimo. A few winters ago I had the privilege of spending some time in Chicago, and looking for indoor activities my partner and I went to the Field Museum, a mega-sized cross-pollination of London's very own Natural History Museum and British Museum. One of the more striking rooms was the Native North American Hall, which contained fascinating exhibits of, amongst other things, peoples living in the Arctic north of the continent. Of these artefacts, it was the ceremonial masks that stayed with me - haunting, terrible, funny, grotesque, conveying more even within the stasis of a glass box than words could. When used within the context of ritual - combined with music and movement - these masks must have projected a rare kind of power.

Review: This is almost impossible to review as music. In some ways, I long for the simple certainties of Status Quo or Riot, for as unadventurous as they are, they exist in a recognisable template of blues-based western rock music. I've mentioned before now my struggles with writing about jazz, despite listening to a fair amount (and having Professor of Jazz as an in-law - embarrassing!). This is an entirely different kettle of fish - or should I say, putrefied walrus? Eskimo is nothing less than an attempt to tell stories of these Indigenous Peoples via the medium of sound effects, music concrete and garbled speech. Imagine, if you will, an attempt to take you through the One Thousand and One  Nights stories solely using the soundboard from The Sims games, and...well, you're not close to getting it, but marginally closer to where you were.

Not only was I not prepared for all the above, I also found I was supposed to do some fucking reading in order to benefit fully from the Eskimo experience. The liner notes point towards the Residents website - what, I wonder, were audiences doing in 1979? - and suggest "for maximum enjoyment, this album should be listened to with headphones while reading the literal accounts of what you hear. Eskimo should be played in its entirety. A relaxed state of mind is essential. Warm clothing or a blanket should be within easy reach." Hard agreement with everything there, including the seemingly tongue-in-cheek throwaway last sentence.

There's nothing quite like Eskimo in my album collection. Even Gryphon's weird attempt to portray a chess match via instrumental prog doesn't come close to the immersion that Eskimo engenders. Through little more than textures, rhythmic drumming and treated chanting the listener is thrust into the icy polar midnight of the far north. Great swirls of white noise are used as a backdrop to the action, an unceasing howl at the core of the narrative. Not a single instrument possesses any notional quality of warmth. Some of the effects are harrowing - the whirring of the harpoon in 'The Walrus Hunt', and especially the cracking of the ice by the water spout, brought into existence through magic by a vengeful shaman on 'The Angry Angakok', are thrilling.

Most of the stories told through Eskimo are bleak, or contain threat. 'Birth' involves a perilous journey to an ice cave and an uncertain fate for the new-born; 'Arctic Hysteria' portrays the looming madness of lives lived within white-out bleakness; and 'A Spirit Steals a Child' is plainly terrifying, riven with the cries of infants and dogs barking into the night. My nodding acquaintance with the Residents had given me a false notion that there would be some levity in Eskimo, but this is as flat-out nightmarish as anything I've ever heard. It is only at the end of 'The Festival of Death' that anything like music breaks out - a last glimpse of something hopeful, bespeaking perhaps renewal or resurrection, to punctuate this astonishing litany of menace.

A curious thing, then. One could almost make a case for Eskimo's inclusion into the 'World Music' genre (the most idiotic and patronising genre yet conceived), although it stands for almost the opposite of the po-faced WOMAD-approved definition. Eskimo also makes a mockery of a raft of black metallers before that genre even came into being; their LARPing around in Scandinavian forests hissing about pagan deities comes across as cartoonish when met with the unyielding terror of the Residents' own images of the north.

Once, in Iceland, I ate hakarl, rotting shark essentially - not too dissimilar to some of the food that the Indigenous Peoples of the north would've eaten (and may still do). It was disgusting, easily the worst thing I've ever tried to eat. But it was fun, right? I was in the comfy confines of a Reykjavik cafe, and the next day I was heading to a thermal spring to wallow around in. It's fun to pretend you're doing something daring, when in reality you're as far away from grim reality as one could be. Remarkable, then, that a pranksterish surrealist art collective from Louisiana can take you, over the course of thirty-nine minutes, one or two steps closer.
Posted by AC at 04:39