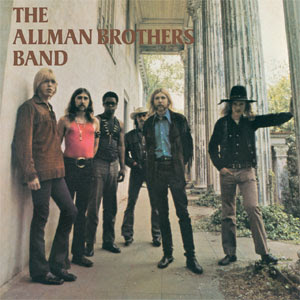 Provenance: I don't know when and where I got this. As with a few other bands I've reviewed on this blog, owning an Allmans platter or two feels a bit like the 'done thing' for anyone who wants to be considered a serious rock guy (which I assuredly do - almost as much as I'd like to one day be considered a 'football man').

A couple of clues though; thanks to an ex-girlfriend I have a Molly Hatchet 'best of', which contains the track 'Dreams'; plus somewhere in my dad's Zappa collection is a live rendition of 'Whipping Post'. My esteem for both of these recordings may very well have tipped the balance when it came to making a purchase.

Review: Approaching the Allman Brothers feels like more than just an appraisal of a single album. For many, they are totemic of a time and a place; a group whose craft and musicianship hauled southern rock - mixing together blues, boogie, soul and country - out of the juke joint and into the arena. The Allmans, more than anyone else, broke ground on a subgenre that would catapult the likes of Lynyrd Skynyrd, Molly Hatchet, Black Oak Arkansas, .38 Special, Blackfoot, the Marshall Tucker Band and the rest into the rock-buying public's consciousness. Despite those they dragged in their wake, the Allmans were also sumthin' else - nobody played a sweeter slide than Duane Allman, or jammed out harder (witness Eat a Peach); and, save for the notable exception of Skynyrd, nobody rivalled the Allmans for the twin tragedies of early deaths and substance abuse.

So, to their debut - and it's easy to hear why they cast such a long shadow. Almost every ingredient that would season the successes of other southern rock acts is present - some took one or two elements, others would port the template across wholesale. There's the gospel organ, swallow-dive guitar runs, white soul vocals and a bedrock of blooze upon which the confection sits. In fact, about the only influence that isn't discernible in these boys from Macon, Georgia, is an overt country influence; certainly not when stacked up against a barroom weepy like Skynyrd's 'Tuesday's Gone', or the backwoods zen of Black Oak Arkansas's 'High 'N' Dry'.

In fact, on opening instrumental 'Don't Want You No More', 'Every Hungry Woman' and 'Black Hearted Woman', there's another flavour that seems incongruous; perhaps my ears are playing up, but I hear a lot of early Santana in The Allman Brothers Band. These songs are essentially interchangeable with cuts from the first two Santana albums, their self-titled debut and Abraxas; both 'Evil Ways' and 'Hope You're Feelin' Better' could grace this album without seeming out of place. You wouldn't blink at a touch of Latin rock or a smattering of congas (indeed, the latter are present on 'Every Hungry Woman'). This certainly sounds more like Abraxas than, say, Strikes or High on the Hog.

Is it good though? Ain't that the point of a review? Yeah, it's good. But fifty years of chesty white guys pumping the blues at megawatt volumes and spooging all over their fretboards has, alas, diluted the impact a little. Greg Allman is a fine vocalist, and his organ work really does take some of these tracks to church in an appealing way. Rhythmically it's all pretty interesting too, a jazz influence discernible in the drumming (the finest example can be found on 'Dreams') and nimble interplay between percussionists Jai Johanny Johanson and Butch Trucks (which doesn't always pay off). Nonetheless, of everything on here, it's the approach taken on 'Trouble No More' which has proved the most enduring - a big ol' sledgehammer that works well enough here but has spawned a thousand more workmanlike, leaden imitators.

At  least the juddery rhythms and soaring glories of 'Whipping Post' are still worth the price of admission alone. Yes, yet another song of a woman who dun him wrong (like, half the tracks here, goddamn - you'd think that stadium rockers playing to full houses of adoring fans never had any luck!) but it's a good'un. Better - it's a reet belter. Overall, worth a look - especially if you like Santana.
Posted by AC at 05:38