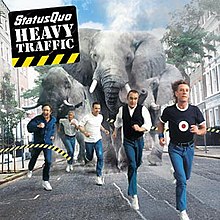 Provenance: I like Status Quo. They were the first band I ever saw in a live setting, and it left a profound effect on me. The two most vivid things I remember about that gig was, firstly, the addictive quality of sheer volume; and secondly, my Dad singing along to 'In The Army Now'.

Review: Along with many, many other households in this sceptered isle, I also possess one of the legion Status Quo 'greatest hits' collections. (For my US-based readers, the Status Quo 'best of' is as ubiquitous as Frampton Comes Alive is in the Midwest). That's all the Quo most people require, but I saw them performing 'Jam Side Down' on Top of the Pops and thought it sounded decent enough to drop coin on the parent album.

And you know what? For the most part it is decent enough. Better than that, as it happens. Most of the songs sound a bit like other Status Quo songs, the good ones. We're mostly talking about the sledgehammer boogie sound Quo have almost trademarked since jettisoning their early psychedelic pretensions. In fact, 'All Stand Up', 'Creepin' Up On You', 'Solid Gold' and 'Money Don't Matter' could (and possibly do) sit comfortably with the rest of their material in a live set. The only curveball, sonically speaking, is 'Green', whose inheritance can be traced to 'Gerdundula'. The rest is a bit fillerish but not unpleasant. Except for one track - 'The Oriental'.

Status Quo don't generally deal in subtleties or finer feelings, so it's apt that they've actually included an elephant on the front cover to symbolise the one that 'The Oriental' introduces into the room. At some point in the writing process, Francis Rossi and John 'Rhino' Edwards (this paragraph is like a safari thus far) presumably thought it'd be a lark to write a tune about mail order Asian brides. Not in a sensitive manner, you understand. The more charitable listener might suggest that it's just a lark, and that half the lyrics are nonsensical. The latter is true - but the sticking point is the other half, replete with pidgin English (ha ha! Because East Asians all speak like that!), lazy cultural stereotyping and the apparent ease in which women can be traded or rented like commodities.

Making play with the perceived exoticism of the Far East has been the stock in trade for many Western musicians. Now, I don't want to be too harsh here because for boys and girls raised in suburban or working class Europe or America, playing somewhere like Japan must've seemed somewhat fantastical. So we get Deep Purple's 'Woman From Tokyo', Y&T's 'Midnight In Tokyo', Krokus' 'Tokyo Nights' and the weird Todd Rundgren song 'Eastern Intrigue' (and, I suppose, Aneka's 'Japanese Boy' or Carl Douglas' 'Kung Fu Fighting'). But that was way back when, and this is a bunch of late-middle aged men in 2002. I just can't find one redeemable or even venial element about 'The Oriental'. It is perhaps apposite that the lineup that recorded this crap actually looks like a bunch of guys who spend their evenings trawling mail order bride websites.

As well as being fairly racist, it's also a monumentally stupid song. There's some lyrics in the middle eight that, I guess, are supposed to convey the sense of a whistle-stop tour of the East. Except that 'and carry on to China / Asia Minor and some more' makes precious little sense, because Asia Minor is most accurately expressed today as the Asian territory of modern day Turkey. It serves to underline the rather parochial reputation that Status Quo have earned for their perceived lack of ambition in territories outside of the UK (whilst boogie contemporaries Foghat and AC/DC set about conquering the US and the world respectively). Perhaps I am expecting too much of poor old Rhino, a man of such delicate sentiment that in 2006 he was moved to write a song about his favourite Brentford FC striker.

Sorry if you expected a more forensic review of the album. Honestly, if you excised 'The Oriental' you have a really punchy, four-to-the-floor rock album. As it stands, its inclusion is as if somebody wiped their shitty ass over your nice new Belgian lace tablecloth. Use the skip function on your stereo, or download Heavy Traffic and delete track three. It's a reasonably lengthy album, you won't miss it. Nobody will miss it.