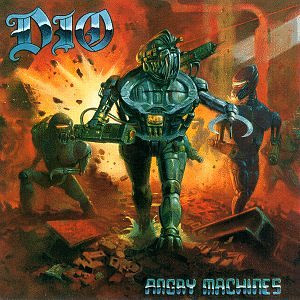 Provenance: This one's a bit weird.

A few of my colleagues at work know I'm a bit of a metalhead; nonetheless I was surprised when a pal in another department emailed me to ask if I wanted eight Dio albums for free. Of course I did.

According to the people in that office, a ratty old carrier bag had been left lying around containing eight Dio albums for about six months. Nobody knows from whence they came or who might have owned them. I'm thrilled that a Dio fanatic may have been moving quietly amongst their ranks this whole time.

Anyway, my theory is that the late Ronnie James Dio sent them through a timewarp from an alternate dimension to round out my Dio collection. These holes in the space-time continuum are a bit fuzzy and offworld-RJD probably didn't realise I had four of those albums already (since palmed off to my brother), leaving me to enjoy the span of Dream Evil to Angry Machines releases, generally considered a fallow period.

And so boys, girls and friends beyond the binary, here it is - 1996's Angry Machines.

Review: My word, those machines do look rather peeved!

The whole deal with robots turning on their creators is not only bound up with their conception - the word, of Czech origin, was introduced into English via a play by Karel Capek called Rossum's Universal Robots, which ends when the robots, er, turn on their creators. This is a very cool and heavy metal thing to do, as some rockin' tunes have come out from this ceaseless conflict - Black Sabbath's 'Iron Man', Judas Priest's 'Metal Gods', a bunch of Clutch stuff, UDO's 'Man and Machine':

Dio - the man - is not usually associated with this kind of jazz. Or, more accurately, he's very closely associated with a particular strain of lyricism - magic, wizards, dragons, rainbows and such. This is also pretty metal, but also absolute nerd shit, so Angry Machines is a welcome swerve into unfamiliar territory. He does this with a slightly rag-tag band, borrowing bits of Dokken and Love/Hate alongside hard rock's very own Zelig, Vinny Appice, the Man of a Thousand Projects.

But enough crap about robots and personnel, what's the muzak actually like? Long-time readers might be surprised that I listen to my albums more than once (or even at all), and I had Twitter opinions on Angry Machines over a year ago:

Am I going stir crazy? I'm coming to the end of Dio's much-maligned 1996 album Angry Machines and enjoying it. The majestic Magica aside, I can't hear much difference in quality between this and his late period, so-called 'comeback' albums
— Alex Callaghan (@AlexWMCallaghan) March 19, 2020


Yeah, I quite liked it. And I quite like it now. Listen up Jack, it's no Holy Diver (what is?), and it's not even in the same tier as Dream Evil (because that's got 'Sunset Superman', which rules) but Angry Machines is a perfectly decent metal album, albeit replete with the pinched harmonic guitar sounds that seemed to riddle the genre at the end of the last millennium (NB: this tended to be something 'legacy' artists adopted to sound legit, when they weren't doing shamelessly chasing the nu-metal bandwagon).

As with most Dio cuts it starts off on a plodder, but 'Don't Tell the Kids' is the most bitchin' tune about divorce (lol) I've yet to hear; the next track after that, 'Black', is even better, with a nagging vocal hook and pounding lockstep riffing. Really - as per my tweet - this is all pretty solid, even if the lyrics reach a new zenith in gibberish. I have listened to 'Double Monday' (huh?) more than most humans and I still haven't the first idea what it's about. Meanwhile, 'Big Sister' is a slapdash appropriation of Orwell's Big Brother, except the gender has been changed from male to female and...that's it. It doesn't go anywhere or explore any interesting potentialities that could occur from framing this universal overseer into a maternal figure.

Besides, who's listening to Dio for lyrics? You're in the game for natural minor riffs and that gigantic, operatic, hammy bellow that was RJD's unique instrument. I can even look past the fact that there aren't that many angry machines actually depicted in the lyrics. What fucking sucks, though, is the last track, 'This Is Your Life'. Ronnie can really deliver on a rock ballad when the fancy takes him - 'As Long As It's Not About Love' from Magica is superlative, whilst one of his efforts in Rainbow, 'Rainbow Eyes', stands as one of the greatest examples of the form. 'This Is Your Life', on the other hand, is garbage.

The production on Angry Machines isn't too bad - a little dry, as was the fashion, but not anything radically different from any other Dio release until that point. Odd, then, that 'This Is Your Life', a piece for voice, piano and baby's first Casio keyboard, sets my teeth on edge. For obscure reasons it sounds really clangy and even out of tune - as if close-miking Mrs Mill's beer-slopped old upright was exactly what the closer to Angry Machines needed. To compound matters further, Dio - man capable of great subtlety when required (seriously, check out 'Rainbow Eyes') - positively moos all over this shit. He sounds like a bison with a headache, and drags the song into fresh realms of atrociousness.

Yes, there are missteps - two(!) songs introduced by nursery rhymes, a breakdown in 'Stay Out of My Mind' that sounds like a Looney Tunes cartoon - but these are venial sins in the grand scheme of it all. 'This Is Your Life', however, is a real dud, even more soporific and tiresome than Michael Aspel ambushing some c-list 'sleb with a poxy red book. Put it in the bin. Still, Angry Machines is worth a listen, though keep that finger at the ready to stop the show after track nine. Why ruin a good time?