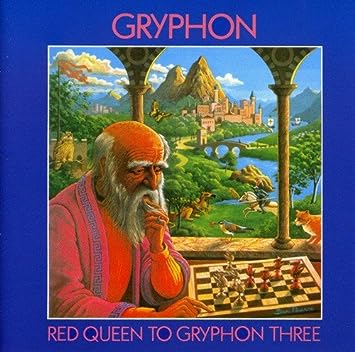 Provenance: A few years ago at work, we were idling away the hours on the taxpayer's dime chatting about striking examples of cover sleeve artwork. I recalled an album my dad still owns, Raindance, by today's subjects Gryphon. In the course of searching for the cover art online, I discovered that Gryphon had also produced a work called Red Queen To Gryphon Three, a concept album that's based on a game of chess and features a krumhorn. Armed with that knowledge, what do you think I did next?

Review: You know when people take that "none more black" line from This Is Spinal Tap and apply it to some other scenario, and it's never funny? Well, I'm not about to break the mould here, but in all human endeavour, there is none more prog than Red Queen To Gryphon Three. It takes two of the nerdiest things in existence - prog and chess - and fuses them together via the medium of medieval instrumentation. I imagine this as the product of only the most ascetic of proggers, denying themselves all pleasures of the flesh (most definitely women, although one suspects that wasn't difficult) to come up with this shining anthracite bolus of musical antimatter. So dimly, horrifyingly black that it sucks all pretenders into the gaping maw of its prog-rock singularity. Friends, this is geekery on a colossal scale.

We've got four lengthy tracks called 'Opening Move', 'Second Spasm' (lol), 'Lament' and 'Checkmate'. None of this makes any sense whatsoever, because this is prog so pure that it's entirely instrumental. Why besmirch this magical extravaganza with such earth-bound discordance as the English language? This is the music of the spheres! The universal resonance! I will concede that, possibly, the only thing more progressive would be to either make up your own language or perform your horrible compositions on ice.

I'm not sure I even need to tell you that Red Queen To Gryphon Three begins with a keyboard fanfare, as anyone with a passing knowledge of the genre could've guessed that already. 'Opening Move' is ambitious, in the sense that it takes the listener through a variety of moods - one moment jaunty, the next foreboding - none of which that I've ever experienced when playing chess. The performances are almost virtuoso, and it must be admitted that the quieter, piano-led moments are quite affecting. 'Second Spasm' (still laughing) starts off altogether rather 'hey nonny-nonny', but again, shifts about in timing and atmosphere; however, it retains a cheerfully martial feeling throughout, which gives it a good sense of cohesion, and the main theme (played on a variety of instruments) manages to be both knotty and catchy at the same time. Erk! I'm starting to enjoy this!

Ah, but now we're onto 'Lament', which is very sad and makes me cry. Kidding! Yeah, it's a bit more mournful than the preceding material, and the bassoon (a glum instrument) gets a decent workout, but any true emotion gets sucked out of proceedings by mere dint of it being a fucking prog track. Can you sob in 13/7 time? These guys seem to think you can. Weirdly for a track called 'Lament', there are a couple of brief movements that are frantic and upbeat, all crazy woodwind and Afrobeat guitar sounds. By this point I felt that I'd been listening to RQTGT for about a day, and so these moments of elation mirrored my notion that it was all soon to be over. A glimpse at the stereo revealed I was only just over halfway through.

Ahhhhh, but I can't quite hate it! The music is so guileless, so questing and brimming with ideas that cynicism feels churlish. It's not as if anything hangs around too long, either - Gryphon's modus operandi on RQTGT seems to be "getting bored of this twiddly bit? Don't worry, another will be along soon enough."

However, once you're halfway through 'Checkmate', exhaustion has almost settled in. Despite noble attempts to cut through all the jibjab by establishing a theme for each track, it's all starting to blur together. The jazz guitars! The clavinets! The bassoons! The krumhorns! (Reader, I have discovered that there are two krumhorn players on this album.) In summation, Red Queen To Gryphon Three certainly takes the listener on a journey - one where the destination can, at times, be obscure - but it's a quixotic undertaking. How anyone can conjure up a game of chess whilst being bombarded by this folk-prog maelstrom is beyond me.

At core, though, this is the most potently distilled prog in my collection, and so I shall cherish it forever. I'll probably listen sparingly, because I don't want to actually turn into a wizard, but listen again I shall.
Posted by AC at 11:56