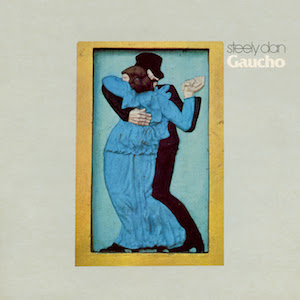 Provenance: By the time I had purchased Gaucho I was deep into 'the Dan'. So, it was the purchase of a fan seeking to be a completist. About the only notable thing one could say is that I bought it in Kansas City. Fine BBQ out there, folks.

Review: The first time I slipped Gaucho into my stereo I frowned, wrinkled my nose and stashed it away for a few years. Something about it triggered an internal revolt. I struggled to square this with the questing solos of Countdown To Ecstasy or the deep jazz grooves of Aja.

I'd like to say that my innate natural curiosity and generous approach to reappraisal led me back, but the truth is I saw Steely Dan in concert and heard a few of the songs from Gaucho played live. They sounded great. I came home and put Gaucho on, and heard the same songs as I'd heard at Wembley Arena. They sounded great.

This would be the last album Steely Dan made before splitting in 1981 (they would reunite in 1993 and record two more platters) and it shows. Two years after Gaucho, Donald Fagen would unleash The Nightfly onto the world, and to say that these albums could be kissing cousins is an understatement. The production is similar, the arrangements have the same feel and even the synthesizer textures are alike. One crucial difference - I liked The Nightfly the instant I listened to it. I didn't need time to let it grow, or to witness the compositions in another context. So what's the difference?

For one, drugs. This is Steely Dan's drug album - or, more accurately, their cocaine album. It's not just the references in 'Hey Nineteen' and 'Time Out Of Mind', concealed with a gossamer-thin layer of metonym and allusion; it's also the backbone to the vignettes in 'Glamour Profession', which delineates a few of the characters involved in the coke trade game. Moreover, it's not only the subject matter at hand but even the very consistency of the sound you're hearing that screams Bolivian marching powder. Surfaces shine with a flat glossiness, rhythms snap with a jaw-grinding lockstep, synths gleam and shimmer with an antiseptic chemistry.

At first, this is what turned me off. Even when factoring in Becker and Fagen's notorious perfectionism, prior albums still had a human heartbeat and the odd ray of romanticism glinting through the carapace of cynicism, obscurantism and wisecracks. Gaucho, in comparison, felt tired, numbed, a kind of end-of-the-party sourness creeping in.

Well children, I started to buy the particular brand of weltschmerz the boys were selling. Leaning in, I found oodles to savour. The slickness combines nicely with the subjects - narcotics, ageing lotharios, Hollywood homosexuality scandals, possible PTSD - into a sickly brew of L.A.-flavoured sleaziness. As a downbeat chronicle of a gilded demimonde and the lowlifes slithering around in it, Gaucho remains unmatched.

So wallow in the reflective degeneracy of 'Babylon Sisters'; wince at rueful narrator of 'Hey Nineteen' determined not to act his age; and luxuriate in the frothing monument to perceived folly that is 'Gaucho' itself, a confection that starts off sounding like the theme to a low-budget breakfast chat show and builds to a mock-epic tower of grandeur, each jazzy augmentation of the usual rawk 'n' pop chord progression tugging you ever so slightly off centre. I've heard interpretations of the song talking about gauche (geddit?) roommates or friends, but to me I hear two film buffs ruminating upon the secret homosexual lives led by movie stars like Rock Hudson, or maybe some minor player like Perfecto Telles. The latter wouldn't surprise me.

There's great stuff all over - the bleak 'Third World Man', which hitches a mournful, swaying riff to harrowing tales of shellshock, is apparently one of Joni Mitchell's favourite Dan tracks; and 'My Rival' is possibly the most old skool track on this joint, which sounds like a larky, Sunshine Boys-inspired tale of two geezers with beef, but might also be about fatherhood. That their songs wind, twist, reflect and elide like MC Escher illustrations is just one of the buzzy little thrills afforded to the serious Dan fan.

Gaucho took its time to reveal its charms to me. At first, I didn't really understand it. Now, it's the Steely Dan album that most frequents my stereo. Funny how things shake out, isn't it?
Posted by AC at 11:08