Fire Down Under - Riot 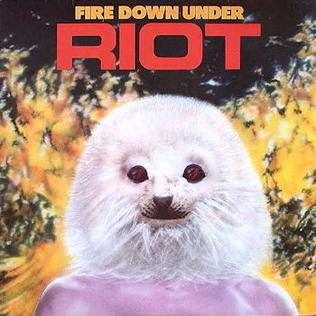 Provenance: No big story behind this purchase, I just happened to read about this album and it sounded up my street.

Review: Before anything else is said, can I please ask what the fuck that abomination on the front cover is supposed to me? It appears to be some kind of ghastly Dr Moreau hybrid man-seal, but for the life of me I can't fathom why it's gracing the cover of a hard rock album. I'm not the only one affronted by this abortion. This is worse than Y&T's stupid robot, and has possibly edged it ahead of Iron Maiden's incompetent Dance of Death artwork to be the worst album cover of any I've reviewed so far.

However - starting off your album with a track called 'Swords and Tequila' is dope as fuck, a completely alpha move that almost excuses the fact that you've put a baby fur seal on your album cover. It matters little that Fire Down Under sounds as if it's been recorded inside a shipping container, or that the lyrics are so mind-bendingly on-the-nose that you're weeping for a simile or metaphor by the last few tracks; you start a rockin' album with a track called 'Swords and Tequila' and you're cooking with gas, baby.

There's something extremely lovable about Fire Down Under that cloaks it's myriad demerits. Never mind the fact that this is metal as written by people who palpably haven't ever looked into a book that doesn't possess illustrations. Ignore the fact that the influences begin at track one of Judas Priest's Killing Machine and end at track eleven of Judas Priest's Killing Machine. Don't sweat that every guitar solo sounds the same. Try to drink yourself into such a stupor that you forgot you ever saw that crime against nature on the album cover.

See, what Fire Down Under has is guts, sincerity and an all-in, gonzo belief that rocking hard is the apogee of human experience. Seeing as an actual Nazi has laid claim to the expression I would use to describe why this album works, I'll settle with stating that this is a victory due to nothing less than bloody-minded and blinkered commitment. Passion and sincerity can take you a long way when some of the subtler arts employed by most artists are absent.

Besides, there's a base level of competence here - everyone can play, the vocals are appealing enough if generic - which means that Fire Down Under keeps its head above water where it matters. On top of that, although I did mention that every solo sounds the same, that's no bad thing because that one solo fucking smokes. The aforementioned artlessness that went into the creation of Fire Down Under works in its favour, as it's absolutely free of pretensions towards anything other than sending the dandruff flying. So, whilst 'Outlaw' has a chorus that is - literally - about playing roulette, it's certainly the best heavy metal roulette song I've ever heard.

The sheer joy in Fire Down Under is that it creates a feedback loop of adrenaline, each subsequent track galvanised by the momentum of what came beforehand (that is, until 'Altar of the King', which takes inspiration both in name and ponderous intro from Rainbow, before morphing into some tight shit that could've graced the first three Saxon albums). I feel it's impossible to not be caught up in the clattery stampede, and I couldn't guarantee you that I wouldn't be bellowing "swords, and tequila, carry me through the night!" once I got a few Peronis in me. Just imagine how much adrenaline you'd have pumping through you when you're down bowling alley and you've got 100mph tracks like 'Fire Down Under', 'Don't Hold Back' or 'Run For You Life' running walloping through your cerebral cortex - you'd be windmilling those balls at the skittles overarm.

To sum up, then, Riot's Fire Down Under works for me because it appeals to every weekend warrior who picks up a guitar and bashes out Foghat covers to sparse, drunken crowds. There's no cynicism behind that kind of slog - there's a purity of purpose (sheer love of rock music) that is reflected in the almost naïve thump and rumble of this album. It possesses an intangible quality that might be best described as 'spirit' - and no matter how clumsy the execution, that spirit shines through. Wonderful! Ditch the seal though, lads.
Posted by AC at 08:31