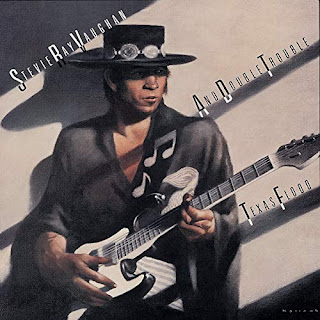 Provenance: Back in the mists of time, long before your Facebooks and Tweet-O-Grams, people did things like collect stuff, get drunk, and attempt to master an instrument. Yes, your humble scribe did some of the former (Panini football stickers, matchboxes) and much of the latter (guitar, a bit of mandolin). As for the drinking? I couldn't possibly say! [Insert winking emoji here.]

My parents very kindly paid for a guitar teacher to do things like point out the wiry bits were called strings, and that it would help if I used both hands. Once basics had been raised to a level of competence, he was keen that I learn to improvise - in essence, to hold enough theory in my head that I was able to react and adapt lead playing, in real-time, to musical structures. A good foundation for this is blues music, which uses the minor pentatonic scale extensively (the bedrock for most rock music) and which often relies on familiar chord progressions.

So, how do you engage a teenage classic rock and metal fanatic with the blues? Give him something suitably rocky and pyrotechnic to aspire towards - and thus, the first blues I ever played was Stevie Ray Vaughan's 'Pride and Joy', which appears on today's album, Texas Flood. I loved it, even the tricksy turnarounds and unfamiliar shuffle feel. Plus it proved to be a watershed moment, as I am now a fully-fledged blues fan; my favourite players are people like Mississippi Fred McDowell and especially the merciless Lightnin' Hopkins, but I'll always retain a soft spot for SRV for providing me with the gateway drug.

Review: Stevie Ray Vaughan came to prominence during the 'blues boom' of the 1980s, which saw the emergence of artists like Robert Cray and the resurrection of others like John Lee Hooker, whose star-studded 1989 album The Healer won a Grammy award. So what was SRV's contribution to the genre? One could argue, nothing new. There are parallels to be drawn between Vaughan and the British guitarist Alvin Lee, who was similarly lionised for his hyperkinetic rhythm 'n' blues playing. An argument could be made that Vaughan was an improvement - defter, more accurate, a better songwriter and, crucially, in possession of a genuine grit 'n' diesel Texas drawl, as opposed to the dorky facsimile that Lee (and, in fairness, many others) tried to conjure up. Unlike Lee, Vaughan didn't stray far from the blues either; yes, he made a cameo on a Bowie album, but his own material was locked down, and when he did interpret the music of others, it was to emphasise its bluesiest elements (his take on Jimi Hendrix's 'Little Wing' being a prime example). There was no meandering into psychedelia with Vaughan, which cannot be said for Alvin Lee and his band Ten Years After.

Let's start off with my own personal bone that requires picking with regards to Texas Flood; 'Pride and Joy' and 'I'm Cryin'' are the same freaking song. I get that the first is celebratory and the latter strikes a more consolatory tone, but dude, write some new music. It's a ten track album that doesn't even top forty minutes and yet here are a couple of 'companion pieces', I guess. A bit of a 'fuck you' to the blues buying public, but I must admit a sneaking respect for this approach. It's like writing a song for your girlfriend, and when she dumps you trying to fit the name of the new squeeze into the melody. Writing the same song for when you're both happy and sad about your partner is, upon reflection, quite an alpha move.

Duplication issues aside, this is a quality slice of 1980s rock-influenced blues. The clean production sound works when recording what is a small combo - Vaughan is backed by bass and drum-mongers Double Trouble throughout - as it brings his ultra-precise lead playing to the fore. Remarkably, for such a polished product I was later to learn that the entirety of Texas Flood was recorded in two days and features no overdubs. Give or take some messing around with the levels, what you're hearing is the live band, it's extraordinarily tight. The vocal performances are fantastic too, and it's boggling to try and comprehend how SRV managed to wring such impassioned performances from both hands and larynx without any need to go back and fix anything.

All the hallmarks of Vaughan's playing are there from the get-go, too; heavy vibrato on bent notes, daggerish little single-fret slides and almost percussive use of double stops. The latter is especially evident on 'Love Struck Baby', a twitchy, fidgety shuffle blues that begins more like the commencement of a boxing bout than a blues song. The most comprehensive displays of SRV's guitar trick-bag are to be found on the instrumentals 'Testify' and Stray-Cats-on-amphetamines rockabilly whirlwind 'Rude Mood', although the dizzying 'Mary Had a Little Lamb' runs them close; and that aforementioned deftness comes to the fore on the closer 'Lenny', another instrumental, in this instance an glimmering, iridescent tribute to Vaughan's partner Lenora Bailey (she thought 'Pride and Joy' had been written for another woman, so SRV wrote her a brand new song - wise man).

I can't claim to hold too many original opinions on music; I think my takes on most of these albums resonate with the critic pool at large, albeit not as well written. I do adhere to the odd heresy, like my belief that Neil Young's Trans is misunderstood and ZZ Top's Recycler is not devoid of merit, but by and large I'm reasonably vanilla. Thus, here's my lukewarm take on Texas Flood that anyone familiar with SRV has probably seen ambling over the horizon for a while now - it sacrifices soul at the altar of technical ecstasy.

The problem is probably me and my relation to blues music. When I interrogate my own feelings about Stevie Ray Vaughan and the blues I feel a bit queasy, to say the least; am I like the martinet Ewan MacColl, insistent on "authenticity" above all else? Would I have pulled the plug on Dylan? I've been a good boy, I read Elijah Wald's Escaping the Delta and feel clued up enough not to fall into the authenticity trap (I've written about this before now), so why do I have such a problem with Texas Flood? Is it merely because this is tagged as a blues album, and so I'm bringing a whole mess of expectations to the table that really shouldn't be there? How come I can enjoy the 'newgrass' movement begun in the 1970s (which sought to fuse bluegrass to styles such as jazz - and this has just reminded me to go and listen to some David Grisman Quintet) without my appreciation of bluegrass colouring the experience? Perhaps because my knowledge of bluegrass is dwarfed by what I (think I) know about blues music, and is unencumbered by those strange gatekeeper tendencies that can sometimes evolve alongside a burgeoning personal passion.

Sadly, I must conclude that I'm simply too smart to properly appreciate Stevie Ray Vaughan.

Genuinely, though, I really must stop sorting things into boxes and weighing up their merits accordingly. Because taken at face value, Texas Flood is a rollicking good time. It's an album full of good singing, good playing and lots of whizzy guitar licks, and so in the future I'm going to endeavour to meet the album on these terms alone. Even if 'Pride and Joy' and 'I'm Cryin'' are the same freaking song, goddamn.
Posted by AC at 05:50