The Captain And Me - The Doobie Brothers 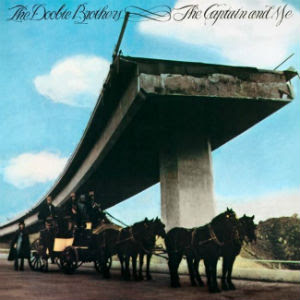 Provenance: The Doobie Brothers had long been a shadowy presence in my musical consciousness prior to picking up The Captain and Me. I had vague notions that they were a big deal in the USA, and knew 'Long Train Running' (which is on Captain...) from a variety of dad-rock compilations. Everything else is a little hazy.

For example, did I know 'China Grove' before playing Grand Theft Auto? I certainly covered it in a band later on, but I can't say whether my virtual capers predated my purchase of this album or not. I knew the song 'Listen To The Music' long ago, but wasn't sure who did it (NB: the Doobie Brothers). Same deal for 'What A Fool Believes', and in any case it doesn't sound much like the Doobies; it's more akin to the unholy prospect of Captain and Tennille fronted by a walrus. No good, man.

So, at the point of buying this album I perhaps thought of the Doobs as a bit southern rocky, slightly funky ("but can you imagine Doobie in your funk? Whooo!") and maybe prone to the odd boogie number. And you know what? I was right.

Review: Everything on The Captain and Me is done tastefully and is in its place. The rocky bits rock out, the mellow bits are nice and serene, the quiet bits are quiet and the loud bits are also quiet. It's well-played, well-sung, goes down smoothly and is about as edgy as a damp cabbage. Keep this one on file for a sun-dappled day suited for ingesting soft drugs and makin' it with your old lady.

Weirdly enough, given the above, I don't hate it. I hate bits of it, sure, but overall The Captain and Me coasts by on just enough charm and finesse that I can't bring myself to condemn it outright. There's a slickness to proceedings that, as a fan of Steely Dan and Christopher Cross, I view largely as a positive. Sure, I've got Crass and Stooges albums tucked away (yet to be reviewed, I remind myself) but the top-down, ease-the-seat-back coolness of American FM rock (always American, as the British flavour always seems a bit desperate) can work a strange magic on me. Take that old warhorse, 'Long Train Running' - a clumsy funker featuring prominent congas; yet it coasts by on a sublime vocal hook coasting over the top of attractively itchy guitar work.

That equally hoary slice of highway razzmatazz, 'China Grove', a strange paean about what sounds like an utterly ghastly commune in Texas, wins out with a guitar riff that is kissing cousin to Nazareth's 'Hair of the Dog', but it's infinitely smoother and less clay-footed in execution. I suppose a certain nimbleness and elasticity accounts for the appeal of the Doobie Brothers on this album; high mids, choked-off bass (for the most part) and guitars that cluck and peck, rather than sledgehammer you into acquiescence. Keep it light and airy, give the melodies a bit of breathing space, add a bit of diet bluegrass acoustic guitar and you're onto a winner, baby.

However, the eagle-eyed amongst you will probably gather from "I don't hate it" and "I hate bits of it" that I'm not entirely uncritical of The Captain and Me. And these aren't the small, easily surmountable bugbears such as the hamfisted stab at a multi-part song that makes 'Clear as the Driven Snow' sound like a bargain basement Kansas ft. Roy Harper track, because if I bitch about that I might as well throw out most of my 1970s rawk platters. No, we're back onto women getting a bum deal from these fucking hippies, again.

Thus we have 'Dark Eyed Cajun Woman', a track that hangs off a knotty, stuttering guitar riff which is great, great, great. What could be a witchy little swamp rocker instead gives one a bit of a chill with the lyric "You know, I took you for a small girl / Really not quite seventeen." Admittedly our serenade goes on to state, with some relief I should imagine, that he was wrong and that the object of his ardour was a grown woman. Phew! No need to join the ranks of the Rolling Stones and Faster Pussycat in my hall of shame.

The other lowlight comes in 'South City Midnight Lady', which has a title that makes me want to reflexively puke. It's actually sports one of the prettier melodies on Captain..., a gently yearning thing that the Eagles used to be able to conjure up before they dived into a hillock of fine Colombian. However, come the chorus and we're getting the following being dribbled out:

At this point I'm scooping up the vomitus so I can swallow it back down and re-evacuate this shit out of the most fitting orifice. No name, no agency, no nothing about the person this song is addressed to aside from what she can do for the drunkard night owl she's unlucky enough to be lumbered with. Not especially egregious on its own, but as part of the wider Captain... context, women only serve as objects to be desired or discarded. The way this is simpered out pisses me off, and the cherry on top of the turd is that awful faux-Southern gentlemanly "much obliged indeed". I'd haul these guys in front of the Hague for that alone. Incidentally, the next song, on which the Doobies try (and fail) to sound tough, is called 'Evil Woman'. Of course it is. Of course.

(Which is not to say you can't do a song like that; ultimately it's the prerogative of the artist. But ELO can do an 'Evil Woman' with at least some degree of wit and accomplishment, and even Cliff Richard can pull off a 'Devil Woman' by making it a surreal end-of-the-pier chiller, one that he can never perform again because it's too spooky for his religious faith to handle.)

So, what the hell, go listen to The Captain and Me for an undemanding forty minutes or so. There's good singing, good playing and some sweet harmonies to be had. I personally prefer this rotating cast of vocalists than the era where Michael McDonald is thrown into the mix, but whatever. Best enjoyed with a cold beer and an empty brain.
Posted by AC at 09:09