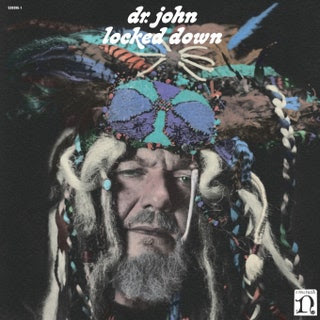 Provenance: One hundred percent sure that my brother got me into Dr John, although how and when he did remains a mystery. One moment there was no Dr John in the house and then suddenly a 'best of' CD appeared in my brother's room. Anyway, it was very cool.

Happy to say that my brother and I got to see the late Mac Rebennack together at the Barbican Centre, as part of the 2014 London Jazz Festival in a special performance paying tribute to that other favoured son of New Orleans, Louis Armstrong.

Review: There are loads of Dr John albums out there, and I own about four. Why this one? Well, having been stuck in a rut bumping out easy-rollin' rhythm 'n' blues alongside a slew of guest musicians, some bright spark decided that the good doctor needed a bit of lead in his pencil. Enter Dan Auerbach of the Black Keys as producer to stoke the boiler a bit, yet could also be relied upon to be sympathetic towards his subject. Interestingly, Auerbach encouraged Dr John to step away from the piano and onto a range of rather grungy sounding keyboards, whilst he handled guitar duties. Crucially, every song on Locked Down is an original, co-written by Dr John, Auerbach and the band assembled for the album.

As a consequence, Dr John's final studio album of original material sounds fresh, organic, loose and live. Auerbach also gets the production spot on - dusty like the first Wu Tang long player, reverb turned all the way up to spooky, and there's a supreme indifference as to whether instrumental tracks bleed into each other. The end result can only be summed up as sounding downright mean; this is a platter that sounds like it'd beat your granny up for her pension and kick the dog for a laugh. Rather cleverly, it also harks bark to the grimy, indistinct stew (must - not - write - gumbo) of Gris-Gris, the Nite Tripper's very first outing under his own steam.

Whilst this doesn't contain anything quite as weird or demented as 'I Walk On Guiled Splinters' (one of the more disturbing cuts ever committed to tape), Locked Down is dark, swampy and sinister. Dr John spits some surprisingly downbeat, even paranoid, lyrics to the likes of 'Ice Age' (where he compares the CIA to the KKK - nice) and 'Kingdom of Izzness'. I love these songs, with their janky guitars and slightly queasy timekeeping in some quarters, which manage to sound both ramshackle and powerful at the same time.

This sickly, feverish mood persists throughout until the final cut, 'God's Sure Good', at which point the McCrary Sisters come to the fore. On such a necromantic album, it's almost a relief to hear the affirmative, joyous wallop of traditional black gospel, which the sisters provide with gusto at each chorus. Even here, on what should be the most straightforwardly positive song, the denouement morphs into a wild, abandoned jam. Despite the protestations of affinity towards a nominally Abrahamic God, darker forces always seem closer to hand.

In summation, Locked Down is a superb Dr John album - greasy, ugly and shorn of the tameness that had crept into some of his latter-day output. Credit must go to Dan Auerbach. By shutting the door on pipe-and-slippers guest spots and woodshedding a crack band, he managed to coax a set of performances more fiery and vital than anything had sounded in years. Is this Dr John's best album since Goin' Back to New Orleans? Is this Dr John's best since City Lights? You be the judge. Meanwhile, I'm going to skip back to 'Eleggua', which hitches marble-mouthed Nawlins hokum onto a tumbling woodwind riff and rides it all the way home.

Dr John was a big loss. Like his hero Professor Longhair, you knew it was him within seconds; those trilling triplets on the high keys, that entirely unmusical, strangulated rasp that nonetheless sounded perfect atop the jazzy, funky rhythm and blues that was his trademark. I saw him perform twice, and he was spectacular on both occasions. Now all I can do is cue up 'Iko Iko' and daydream about the time I spent back in the Crescent City ten years ago. That's not a bad consolation prize, though, is it?
Posted by AC at 09:05