In One Eye And Out The Other - Cate Brothers 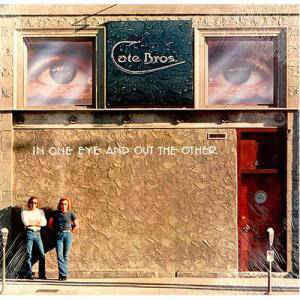 Provenance: Saw these cats playing on the title track on a BBC4 compilation show called Southern Rock at the BBC. I'm reasonably sure it was from The Old Grey Whistle Test.

The track was really fresh, true, but the best bit was that the Cate Brothers appeared to be near-identical twins - a couple of healthy looking lads with haircuts seemingly achieved by using each other as mirrors. Criteria enough for me to hunt down the album.

As a sidenote, although I wrote my X-Ray Spex review to coincide with the anniversary of Poly Styrene's passing, I'm mildly pissed off that I didn't do this one beforehand, thus continuing the run of eponymous bands that began with Van Halen and continued with Santana.

Review: One of the best things about Southern Rock at the BBC was that it really did play fast and loose with the word 'rock'. Taking a rather catholic approach, it wound up including, of course, the likes of Lynyrd Skynyrd and the Atlanta Rhythm Section (playing 'So Into You' - cool), but also Dobie Gray, Charlie 'Benghazi ain't going away' Daniels and the Cate Brothers. There is a rock edge to the track 'In One Eye and Out the Other', true, but it's more a funk number, and going by this album, the brothers' true metier was funky blue-eyed soul.

Fortunately for them, and me - and perhaps you, dear reader, if you decide to check the Cates out after this review - on In One Eye... they do this very, very well. Brother Ernie tends to take lead vocal duty and plays the keys (including some real 'come to church' organ), whilst Earl works the guitar and harmonises nicely. It's a pretty hot bunch backing 'em up too - Steve Cropper and Donald 'Duck' Dunn of the M.G.'s, sax greats Jim Horn and Bobby Keys (literally everyone), Jay "I played the solo on 'Peg'" Graydon and David "I've won sixteen Grammy Awards and I'm Tommy Haas' father-in-law" Foster. With this kind of talent onboard, you'd think it was impossible to make a bad album, right?

The opener 'Start All Over Again' sets the tone, a widescreen soul weepy with Ernie emoting over a river of organ, but things really get cooking on the title track; a slippery, stuttering funk number featuring cute chromatic runs, a crackerjack solo from Earl and a monstrous chorus. Honest to God, this is one of my favourite joints not only on the album, but in the entire funk genre.

I recall when I first heard In One Eye... I was ever so slightly disappointed that, title track aside, it lacked any other real stompers, and altogether was a little soft. I should get my ears syringed, because whilst that it true in a formal sense, closer inspection reveals so much that is warm and accomplished. The closest the Cate Brothers get to replicating 'In One Eye...' comes right at the end of the record, the barrelling 'Where Can We Go' wrapping things up in exhilarating fashion.

What I hadn't properly appreciated was the brothers' facility with writing nagging, ear-wormy parts that don't always hit in the obvious places. Yes, their choruses are hooky, but on tracks like the prowling 'Give It All To You' the chewiness is in Ernie's tough singing in the verses and the incredible groove the band lay down. The breezy catchiness of the chorus to 'I Don't Want Nobody' works, yes, but it's amplified through rubbing up against the nervy chicken-scratch guitar of the verses. It's just well-crafted material played by crack musicians. When I try to explain the appeal of Nils Lofgren's music to me, I always fall back on "good singing, good playing" and the same applies here. I should point out that Ernie Cate is a much, much better singer than Nils (no offence dude), and one of the most underrated soul vocalists out there.

Really, the only track that still does little for me is the sappy 'Music Making Machine', which just about tips into schmaltz with it's self-pitying lyric. You want to shake them, and point out they've already done their 'road song', 'Travelin' Man', a bouncing horn-powered rave-up that would've slotted nicely onto Dr John's In The Right Place. I guess they went for Al Jarreau but ended up more... (NB: I've no idea where I was going here - Al Pacino? Al Qaeda?)

One minor blemish aside, In One Eye... is superior stuff, an album I play frequently, which is something you should look into doing also.

A bit of fun trivia for you here, by the way - Jay Graydon and David Foster would go on to collaborate in the short-lived AOR band Airplay, and together with Alan Thicke would write the incredible theme music to Thicke of the Night.