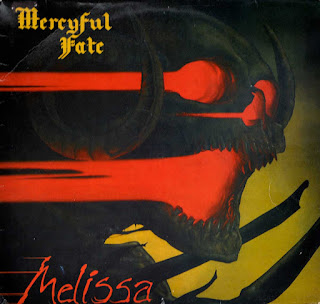 Provenance: This one's easy - as a consequence of hearing the Mercyful Fate medley from Metallica's Garage Inc. album, I really had no choice but to get this bad boy by Denmark's finest.

Genuinely, I could leave it there and consider it a suitable review. Why expend a bunch of bytes and bloviation on Melissa when anybody with one working lughole could tell you that this smokes?

The album cover is cool; King Diamond (lead screamer) looks like some unholy mashup of Ace Frehley, Rob Halford and Dave Vanian; and a simple rundown of the track listing should give one a flavour as to how motherfucking incredible this platter is going to be: 'Evil', 'Curse of the Pharaohs', 'Into The Coven', 'At The Sound of the Demon Bell'...it goes on, but I could just halt here and let those marinade in your brainbox for a while.

I often have the albums on loud when I'm reviewing them. This one, however, was cranked to distinctly un-neighbourly volumes, and I'm banking on either being taken down by an armed response unit or being worshipped by the locals as the true spawn of Wotan.

Perhaps you might appreciate some context around this sulphurous little beauty; this is Mercyful Fate's debut album, released in 1983 just around the time that the New Wave of British Heavy Metal was losing momentum. However, this makes Melissa contemporaneous with some important Euro-metal developments, not least of all the release of  German outfit Accept's Balls To The Wall. I highlight this album in particular because Accept shared with Mercyful Fate a sensibility that includes classical influences. This represents something of a break from most NWOBHM bands, who still looked towards the pentatonic-based hard rock of the 1970s for musical cues.

Which isn't to say that Melissa doesn't sound like a NWOBHM release - it absolutely does for the most part. However, unlike the Roundhouse mob, who flirted with demonic imagery without ever really going the whole hog, the Mercyful Fate of Melissa definitively choose the left-hand path, and in doing so would influence bands like Morbid Angel and one of my faves, Death. They're probably just pipped to the post of black metal pioneers by Venom, but as a listening experience Venom suck whilst this slaps, so let's call Mercyful Fate the first good black metal band.

Why? Because they're songs are full of Tonka-truck sized riffs, banshee screams and some inventive soloing from guitarist Hank Sherman. Really, King's vocals cannot be emphasised enough - his mid-range is characterful (and not unlike fellow Scandinavian Tobias Forge of Ghost, tonally speaking) but it's the Halford-esque falsetto that powers these tracks to new heights. There are great King Diamond moments all over the shop, but probably the bit that tickles me most is on 'Black Funeral' where he first sings "Oh, hail Satan" in his chest voice, and then replies to himself with "YES, HAIL SATAN!" in his ghoul-shriek. Stryper never did anything half this fun, and that's why Lucifer, Son of the Morning, is winning the rock 'n' roll stakes.

As mentioned before, the riffage is supreme and each song has about a million great examples. My favourites are probably those that underpin the chorus to 'Into The Coven' (one of the wretched PMRC's so-called 'Filthy Fifteen' songs) and the bit in 'Satan's Fall' where King spits "Bringing the blood of a newborn child!", plus virtually every moment in 'Curse of the Pharaohs' (sample lyric: "Don't touch, never ever steal / Unless, you're in for the kill"), a song that should be the Danish national anthem. (NB: having said that, Denmark's national anthem does have some pretty heavy metal lyrics; don't let "There is a lovely country" fool you, the rest of it rips.)

All this winds up with the strange, chilling tale of the title character, Melissa, who we are told is a witch and it is heavily implied that she's been executed for her eldritch practices. But is she truly gone...? Great business, all told. I can't get enough of this. As it so happens, King Diamond used to own a human skull he named Melissa; par for the course, one could surmise, for guy who also has a microphone stand made from human leg bones. Plus, after leaving Mercyful Fate he did a bonkers track about his "grandmaaaaaa!". Essential heavy metal.