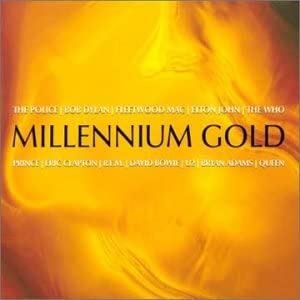 Provenance: This goes back to the days when I was a weekend drone at WHSmith. Like an oasis in the desert, Millennium Gold felt like the only halfway listenable music (I got to choose what went on the in-store stereo) amidst the shifting dunes of Blue, Russell Watson and True Steppers & Dane Bowers ft. Victoria Beckham.

Back then we also enjoyed a handsome 25% staff discount, which put this compilation firmly within my budget. At the time, I felt, it featured enough artists whom I liked a little, but not enough to go beyond their 'best of' offerings. Millennium Gold represented decent value for money, you know?

Review: So, we have a digipack double-CD that, I suppose, commemorates a whole millennium's worth of music! If by 'millennium', you mean 'the last four and a bit decades of the 20th century', the oldest tracks here appearing in 1967. Back in 2001 I didn't really grasp what conceptually links together all the songs on these discs, and twenty years later I'm still stumped. Maybe some music biz Thucydides dipped his or her toe in the stream and said "fuck it, let's just slap something together that feels timeless". Let's go.

Disc one: The first thing that should be observed is that in many instances, these aren't what I, nor many fans of the artists herein, would consider to be their best tracks. They are arguably up there in terms of collective affections; and perhaps that's the real key to Millennium Gold, namely, alienate as few people as possible whilst still putting out a marketable product. It's why so many compilations feature the same old chestnuts, I suppose. Putting together Millennium Gold feels less like the product of someone's musical passions (unlike, say, the incomparable Nuggets collection) and more like a focus-group exercise in compromise. In that respect, it's the perfect album of the New Labour era.

I think most people - and I do mean most people, not music obsessives like me - will hear Queen's 'One Vision' or Extreme's 'More Than Words' and think "yes, that's nice", whilst I'm seething away in the corner that some wonk at Universal wasn't bold enough to put 'Seven Seas of Rhye' or 'He-Man Woman Hater' on here. However, as much as I do like to go deep on artists I like, I don't exempt myself from the everyman in my ability to enjoy the biggies. I do like Prince's 'When Doves Cry', Steve Miller's 'The Joker', Carly Simon's 'You're So Vain' and even the much-decried 'Lay Lady Lay' from His Bobness. In terms of songs I positively love, here's 'Money For Nothing' (that guitar tone is stone cold!), 'The Boxer' by Simon & Garfunkel, Seal's 'Crazy' (though it ain't no 'Kiss From a Rose', right guys?), and I'm impressed that the Velvet Underground's droning paean to sadomasochism made the cut.

There's stuff I don't like here, too! One must experience a degree of tonal whiplash when, two songs on from the dead-eyed Velvets art-rock, we're subject to David Gray's 'Babylon'; and for some reason I've never quite rubbed along with the Pretenders (but I concede there's really nothing wrong with 'Brass In Pocket'). As fun as Meat Loaf's vocals are on 'Dead Ringer For Love' - all histrionics and eye-popping hysteria - I'd forgotten how clattery a track it is; the farty guitar on the Face's 'Stay With Me' is too much of a distraction to be dismissed; and I'll happily live the rest of my prescribed three-score 'n' ten if I never heard 'Brown Eyed Girl' ever again.

Disc two: Despite my fairly mean-spirited mitherings, I can listen to disc one without skipping anything. The same can be said for disc two - mostly. I'm no U2 fan but 'Pride' is great; likewise, I don't own any Paul Weller but 'Changingman' is effective, catchy rock 'n' soul. Again, I look at some of the artists and think to myself that the options are too on-the-nose. If I told you Alice Cooper was here, you'd probably think it was a toss-up between two songs and, yes, it's one of them. Likewise, if you think of the biggest tunes for T Rex and Fleetwood Mac, it wouldn't take you long to alight upon the selections that the mind behind Millennium Gold (disc two) opted for.

That said - I really like 'Substitute' by the Who, really really like the tumbling arena rock of Bryan Adams' 'Run To You', and find that 'Imitation Of Life' has prompted me to be a bit more thorough with REM's back catalogue, given its ability to charm me. Look, even the obvious ones are, more or less, alright. The first half of disc two is listenable without offending.

However, 'I Shot the Sheriff' stinks up the joint, because it ain't Bob Marley; it's Eric Clapton (who, like Paul Weller and Sting, appears twice on MG through membership of Cream, the Jam and the Police respectively). It is, as we all know, crap. Not long after that we've got 'Long Train Runnin'' from the Doobie Brothers, except that, inexplicably, it's some godawful 1990s remix. It's the final fucking furlong that really gets my goat though - a Pulp's 'Disco 2000', a cheap record if there ever was one, and then a gallop through New Order, Simply Red, Everything But The Girl, the Corrs and Sting. Galloping trots, more like! I don't think I've ever listened to this sextet more than three times in my entire life, and certainly never through anything other than sheer accident.

Listening to Millennium Gold again after so long is akin to wakening from a draught of sleeping potion; I emerge into the light groggy, discombobulated, and asking myself "how did I get here?" As much as individually some of these tracks are passable, agreeable even, they exist in such an awkward cheek-by-jowl configuration here that it's tough to swallow in one sitting. It's as if the sequencing was done on Dice Man principles alone. Kids, this was the pre-shuffle life.

Another thing that makes this feel quite redundant is that, as means and opportunity came my way, I've built a rather large CD collection that includes many of these artists. I simply don't need 'School's Out' on a comp when I have the School's Out album. I had to literally blow dust off the case after picking Millennium Gold off the shelf. Still, it was nice to hear 'Changingman' again!