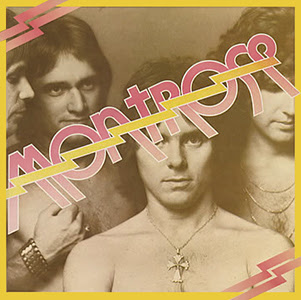 Provenance: This is considered in some quarters to be the ur-text behind the whole Van Halen school of rock (and this lineup even contains a future member of that mighty band).

Moreover, it's generally thought to be a pretty sweet classic rock album by its own merits. Julian Cope loves Montrose (he's also a better writer than I am), and who is going to dispute a druid who made up his own Blue Oyster Cult compilation called In My Dreams or In My Hole?

Review: You know that in some of my reviews I can get a bit huffy about boneheaded, hairy-chested affirmations of masculinity? How I can be a humourless prig when faced with the lazy objectification of women? Well, that's all true, mostly - but when faced with such a monumental feat as Montrose I pretty much say "fuck that", break out my biggest Maltese Cross medallion and bellow along. "YOU'RE ROCK CANDY BABE - HOT, SWEET AND STICKY!!!"

This is it, boys. Here's how to do it. Sure, by the Taylorist mechanics of Robert Christgau's reviewing system, this gets a half-grade off for clocking in at thirty-two minutes, but why hang around when you've made your point as beautifully as this? Simply, Montrose is the best thing Sammy Hagar ever did, the best thing the late Ronnie Montrose ever did, and I'm going to say that even with their storied respective resumes, Bill Church and Denny Carmassi never kicked out the jams like this, before or after. I know Church played on Van Morrison's Tupelo Honey - and so what? Fuck that, Tupelo Honey doesn't have a song on it called 'Space Station #5'.

Montrose is hard rock boiled down to its most necessary constituent elements - drums, bass, guitar and hollerin', with precious little more added into the mix. It's what happens when you take the boogie elements of Grand Funk Railroad and the heaviness of Led Zeppelin but reduced them to their hard, glistening essentials. Shorn of the dopey plodding that many bands confuse for profundity, and drained of the self-regarding substrate of pretentiousness that undermines so much of Zep's output, we're left with a balled-fist of solid rawk, a battering ram of steely riffage.

All this goes hand-in-gauntlet with some great playing and zipped-tight arrangements. Nothing here outstays its welcome; in fact, Montrose barely has its coat off before it's time to go. 'Rock The Nation' is pretty much the keystone on the towering ziggurat of songs about rockin' out and having a good time ('We Rock' - Dio, 'Rock You Like a Hurricane' - the Scorpions, etc. - you get the picture, Jack). Have you ever seen the wonderful short documentary Heavy Metal Parking Lot? That's it, right there - it's the spirit of 'Rock The Nation' made flesh and Aquanet. I like to think that, any time someone cracks a long necked bottle of beer in a car park somewhere, in the name of loud guitar music, they're channelling 'Rock The Nation'.

Plus! Plus! Have you ever heard such a good song about space stations? Yes, 'Space Station #5' implies four other space stations, but this is the only one that comes with a juddery riff and some of Hagar's finest hollerin'. I didn't hear it played once during that recent SpaceX/NASA manned mission. It's official - Elon Musk is too much of a nerd to blast Montrose into space. Do you reckon Musk has ever listened to Montrose? My guess is, 'absolutely not'. Well done mate, you might have blasted a couple of fellow dorks to the ISS, but have you ever downed a Pripps Bla in a Malmo car park? Once again, 'absolutely not'.

I once snuck 'Bad Motor Scooter' onto my student radio station playlist and got it aired one lunchtime. I didn't know what I was trying to achieve at the time, as I could've tried it with any track; only now is the clarity of purpose manifest. I needed a bunch of millennials to hear just how freaking it cool it is to make moped noises with an electric guitar. It's one of the dumbest songs out there - imploring the subject of the lyric to take what seems to be a lengthy scooter ride for the purposes of a booty call - but by god it's majestic. The engine humming noises under the guitar solo are badass and should be done more (sparingly, but more).

The only charge I can lay against Montrose is that its crystalline simplicity - no fussy drums, laser-cut guitars, vocals that cleave strictly to melody - opened the door for many more bands who got the message about paring everything down but forgot to bring talent to the table. I'd compare (please stop me) Montrose with a good Cormac McCarthy book. McCarthy distils English to a kind of singing purity, a form with such a brutal inner musicality that digression, exposition and even punctuation become superfluous. Montrose is its hard rock equivalent, only with less violence and more scooters. An essential listen for any serious rock fan (and what other kind is there?).
Posted by AC at 07:10