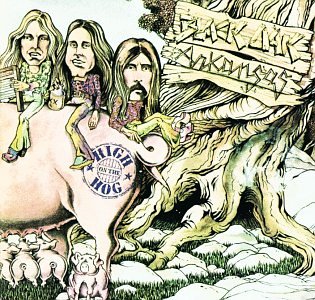 Provenance: I saw these chaps at Sweden Rock Festival one year and had a fine time. Online consensus seemed to suggest that this was a good album for the beginner, so here I am, listening to High On The Hog.

Review: God bless Black Oak Arkansas. They've been around since protozoa first slimed their way onto the primordial beaches of Pangaea, around fifty or so people have passed through their ranks, the rhythm guitarist has two, separate, unrelated nicknames and the lead singer doubles up on the washboard. On that basis alone I am a fan of Black Oak Arkansas. If only they did that cool double drumming thing that .38 Special had going on we might be talking about the world's greatest band.

Alas, they didn't, but a pre Ozzy Osbourne / Whitesnake / born-again Christianity Tommy Aldridge can be found thumping the tubs on this release, though it is unrecorded as to how many nicknames he earned whilst serving his time in 'the Oak'. All kidding aside, this is a really fun slice of southern rock; looser than Skynyrd, less virtuosic than the Allmans, rootsier than Molly Hatchet or Blackfoot, Black Oak Arkansas had a more overt country music influence than many in their genre. What sets them apart is frontman Jim 'Dandy' Mangrum, he of the washboard and a voice that wavers between hillbilly rasp and Beefheartian growl. A curious guy, he's part good ol' boy, part flower child, the self-proclaimed blueprint for David Lee Roth with a penchant for fast living that saw him suffer his first heart attack around age 30.

What I like about High On The Hog is that it's a bit of a grab-bag, with each song inhabiting its own little patch of dirt somewhere below the Mason-Dixon. So 'Swimmin' In Quicksand' has an infectious, funky Memphis groove, 'Happy Hooker' is a fairly straight blues (with a, shall we say, less than progressive lyric?), 'Moonshine Sonata' is a mellifluous instrumental in the vein of the aforementioned Allman Brothers Band and both 'Back To The Land' and 'High 'N' Dry' are down-home, deep-fried, back-porch country; the latter is especially, and unexpectedly, gorgeous.

Where High On The Hog really excels, however, is when it mines a seam of heavy redneck psych that is both slightly unsettling and quite unique. Thus 'Red Hot Lovin'' (these guys love a contraction) 'Why Shouldn't I Smile' and 'Mad Man' all have a faintly ominous atmosphere about them which really works to their advantage in the context of the rest of the album, which is all rather upbeat and rambunctious. Around the same time British bands like Atomic Rooster, Edgar Broughton Band and the Groundhogs were all recording albums swirling with unease and paranoia, so it's interesting to hear these moods given a southern rock twist.

Saying that, for me the masterpiece on the album is the rollicking boogie stomp of 'Jim Dandy', featuring guest vocals from the late, leather-lunged singer Ruby Starr. Doesn't it look like everyone's having the best time?

Given the prodigious turnover of personnel, just by being in the same field as the band there's a good chance that I'm actually a member of Black Oak Arkansas right now. Frankly, if I got to play 'Jim Dandy' and 'Uncle Lijah' (from their first album) and hang out with 'Risky' Rickie 'Ricochet' Reynolds every night, I wouldn't mind one bit. Great album cover, by the way. Top entertainment.
Posted by AC at 15:04