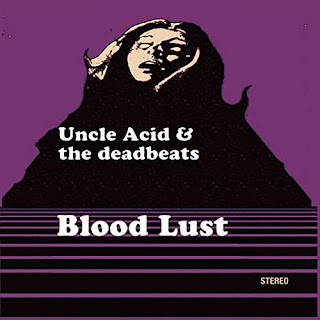 Provenance: A track of theirs was on a Classic Rock magazine sampler compilation, and it stood out so much that I was moved to start a thread about Uncle Acid & the Deadbeats on the music forum I used to post on, asking whether anyone else was aware of this band.

Well, bugger me if K.R. Starrs (Uncle Acid himself) didn't send me a private message to say that it was his band, and that he's glad I enjoyed what I'd heard thus far. As he posted with a hair metal-themed portmanteau username on the site (I did too), and had the good grace never to mention his band on the public boards (unlike some others - I'm looking at you, Carlos from Stonebreed) it was sheer chance that we came across each other.

Anyway, I have bought every album UA&TD have released - Blood Lust being their debut - and managed to see them live in Brighton, a gig which left my ears ringing for a couple of days afterwards. It was at this show where I encountered the rather startling Vodun for the first time, incidentally.

Review: I don't think I am exaggerating when I say that 'I'll Cut You Down' is one of the best rock tracks of the last ten years. It's right up there with highlights provided by Ghost and Night Flight Orchestra, but to me it's all the more remarkable that it sounds like some ghoulish revenant from the Brown Acid series, a long-forgotten blast from 1971 rimed with murk and smoked with the lingering whiff of patchouli oil. I'm not usually keen on modern resurrectionists but I have a definite soft spot for anyone keeping the Sabbath flame alive, and 'I'll Cut You Down' is right in that wheelhouse.

'I'll Cut You Down' is the kind of brain-tenderising stomper I'll always love; eerie, charnel-house vocals, slabs of huge riffage and drums so ferociously primitive that they'd make the Stooges blush. If I had authored such a mighty piece of music I genuinely think I'd be tempted to call it a day. Once you've got the likes of 'I'll Cut You Down' under your belt, you can retire undefeated.

Fortunately, K.R. Starrs has more gumption than I'll ever possess, and so there's eight more tracks pitched somewhere in atmosphere between the gnarliest Hammer Horror films, the Viktor Wynd Museum of Curiosities, side two of Sabbath Bloody Sabbath and the dying embers of Altamont. Yeah, Blood Lust hangs its hat on a very particular Seventies aesthetic, but there wasn't a better decade for curdled dreams, mental degradation and bummer endings. (Incidental note: one could posit that Black Sabbath and Steely Dan were two sides of the same coin, wrangling with much the same issues but from different perspectives; Sabbath embodying the howling death throes of an industrial working-class, whilst 'the Dan' tap into the irony, lassitude and weltschmertz belonging to a demimonde of sybaritic glamour - wot say you?)

Weren't we talking about Uncle Acid & the Deadbeats?

I can make this simple - if you like doomy stoner rock, you'll love this. If you like an epicene creepiness to your vocals, you'll love this. If you play this album loud enough, your neighbours will complain; if you play this loud enough and long enough, they will end up worshipping you. Do you want to be the Jim Jones of suburbia? Then get yourself a piece of Blood Lust.

Everything on here is stone cold killer material, right down to the unsettling bonus track 'Down To The Fire', but blunderbuss to my head, if I had to pick another highlight it would be 'I'm Here To Kill You', which sounds nothing less than a demented take on Van Morrison's 'Moondance', tapping into a hitherto invisible seam of violence lurking beneath the surface. So, Blood Lust - in terms of tasting notes this pairs well with psychonautic journeys to the centre of the mind, or simply lashings of the old ultraviolence.

Right-o, I couldn't let Ying-Yang Ballsteam provide the final review for 2020, but that's your lot for this year. Let's hope 2021 can clear the, admittedly, very low - almost 'pro-limbo dancer low' - bar that's been set by this shitshow, and that this time next year we're gambolling around like spring lambs, albeit with Windows 95 having been implanted into our arms.