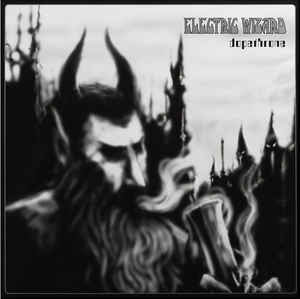 Provenance: Local heroes, innit? I've seen Jus Oborn at a few gigs in the Bournemouth area. One of my best friends was the one to really turn me onto 'the Wizard' though. Incidentally, he's had Jus in his garden (at a barbecue) and I haven't, so that's 1-0 to him.

Review: When listening to music of this kind, I often think of Rob Halford's claim that Judas Priest were the first metallers: "We were the first heavy metal band. Black Sabbath were before us, but there was always something of a dilemma about whether or not Sabbath were a heavy metal band" - a sentiment that Sabs bassist Geezer Butler agrees with.

In my estimation, Black Sabbath were the first heavy metal band - or at least, were responsible for the first fully realised heavy metal album. But that's not to dismiss Halford's assertion entirely; there is an intelligent case to be made for Sabbath as a continuation of a ponderous, doomy sub-psychedelic rock that first slithered into public view via the likes of Iron Butterfly or Blue Cheer's Vincebus Eruptum album. Meanwhile, Priest took the snap and aggression of Led Zeppelin's 'Immigrant Song' and Deep Purple's 'Fireball' and toughened them up with steelier guitars and banshee screaming. Inevitably over time these approaches would interact and cross-pollinate; probably the most perfect synthesis of both approaches, oddly, is a Black Sabbath album - Heaven and Hell - which saw Ronnie Dio fronting the band, his baleful roar energising the music much in the same way as he did on some of Rainbow's proto-power metal cuts.

All of which brings us on to Electric Wizard. If you're looking for synthesis on Dopethrone, buddy, you're out of luck. These fools are unreconstructed Sabbathists, taking the template of that august band's first three albums as the basis for their entire approach. Of course, there's a few tweaks made here and there - most notably the excising of the jazz 'n' folk interludes that Sabbath would indulge in - plus the addition of the occasional interstitial from some ghastly Amicus horror flick, much like fellow Sabbathists Uncle Acid & the Deadbeats. It's all of a piece, all the same aesthetic.

Where Electric Wizard distinguish themselves, however, is sheer enormity. Dopethrone doesn't so much emanate from your speakers as it does crawls from them, moving with the same pace and indomitability as a lava flow edging slowly towards the village in its path. I listen to every one of my albums I review for this blog at the same (reasonable) volume, but the sound conjured up here by Oborn and company is so overpowering that my stereo struggles to cope. Dopethrone is an album of extremes, and all the better for it.

Some bands, when they slow it down, plod. It's a demerit - I often think of the likes of Uriah Heep or Cream lapsing every now and again into a ponderousness masquerading as heaviness. Electric Wizard never fall into that trap, simply because what they're selling is true heaviness; it's the real deal. Every riff is the size of a house, every vocal distorted to remove any sense of sweetness, every bass note flanges off into a seismic white noise. Another great quality that Dopethrone exhibits is that noise is wielded as a weapon. This is truly music one submits to, whether it's the pounding opening of 'Vinum Sabbath' or the agonising, endless feedback drone that acts as a coda to the fourteen minute-plus 'Weird Tales'.

This is doom par excellence. There are bands that are slower (the dull Sunn O))) for one) and countless acts in the margins of the umbrella genre of metal who claim to go blacker, bleaker, perhaps even louder. Yet none have quite met the quaalude-shuffle weight of Dopethrone, at least not yet. Plus, any album with a track listing containing ditties such as 'Funeralopolis', 'I, Witchfinder', 'We Hate You' and 'Mind Transferral'. If this is the soundtrack to the end of the world, I want to be there.
Posted by AC at 07:01