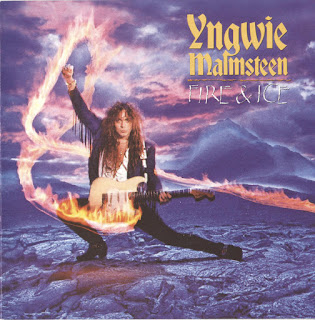 Provenance: Fucking hell. Suffice to say that we all go through some awkward phases in our adolescence, and one of mine was a fleeting interest in shred.

I confess, I wanted to play guitar like Satriani, Vai - and Malmsteen, at one stage at least. Perhaps I was infected with a relatively benign precursor to Covid-19 as I certainly experienced an extreme lack of taste in order to walk into HMV, see this on the shelves and think to myself, "that'll do for me."

Even back then, green around the gills as I was, I had an inkling that Malmsteen had a hint of farce about him. Prior to being unmasked as a particularly charmless air passenger, there was the braggadocio about his own abilities, his disparagement of other fine guitarists and his ludicrous stage-hogging.

But he can sure burn it up on the fretboard, right?

Review: I haven't listened to this for many, many years in the belief that it is doubtless garbage, and - surprise, surprise - I am right. Released in 1992, the tail-end of the butt-rock era, it has the sonics and clarity of an album produced ten years prior. Before I go any further, I would like to reproduce Malmsteen's personal thanks entry from the sleeves notes in full. I think these shed much light on the whole endeavour:

What an absolutely marvellous porridge this is; and we shall come back to the principals in a moment, but there's a glaring omission here if influences are being reeled off. Where is Ritchie Blackmore? Surely one cannot produce what is essentially a bad Rainbow album, albeit one juiced to the gills on steroids, without a tip of the hat to the Man in Black? Fire And Ice is essentially the first three Rainbow albums sped up, with less interesting guitar playing, and a complete absence of the charm that made that trilogy so exceptional. So, power metal, essentially.

Credit should be given where due, and I am thankful that Fire And Ice is an attempt at squeezing Malmsteen's electro-baroque sensibilities into band format; much like Steve Vai's (admirable) Sex And Religion, we have a singer present to give shape and meaning to all the twiddling. Furthermore, the fellow in question - Goran Edman, a kind of throat-for-hire - does sterling work. It cannot save the material, naturally, much as one strong swimmer cannot tow a freighter into port, but he does a manful job nonetheless.

What we're left with, then, is a melange of Rainbow, Magnum, Stratovarius and a clutch of other bands that see merit in rhyming 'fire' with 'desire' and wailing away on harmonic minor scales (so, power metal, essentially). Where Jimi Hendrix figures in this whole farrago one can only speculate, but if Malmsteen is laughing into his sleeve at 'forgetting' Blackmore ('How Many Miles To Babylon', really?), the more deceased of his influences come through loud and clear. Boy howdy.

I am not a good musician, and as such I think I would find it a tough yomp trying to build a metal song around, say, a Bach fugue. This trickiness is untroubling to Herre Malmsteen, who cuts the Gordian knot by simply stopping the song in its tracks so we can hear some fruity organ work. It is distracting and tonally illiterate in 'Cry No More' and 'C'est La Vie'; at least he has the restraint(!!) to only bamboozle the listener for a few bars of this guff in fizzy AOR radio-bait 'Teaser'. Hey, what do I know? I ain't never had no number one album in Japan.

We should come into the soloing. It's all reheated Bach 'n' Paganini I'm afraid. Blackmore was, to my mind, the first to popularise neo-classical soloing into heavy rock and metal, but Malmsteen is the one who has really picked up the baton and run with it. But to where? He is undoubtedly a master at playing all these baroque and romantic scales incredibly quickly, but it's almost as if he's boxed himself into a corner. Taste, musicality, moderation are all sacrificed to a frightening, but ultimately banal, demonstration of speed and technicality. Malmsteen is not quite as incontinent a guitarist as double haircut-haver Michael Angelo Batio, but on a track like 'Forever Is A Long Time' (stupendous title) he runs Nitro's finest close.

Highlights? Yeah, there are a couple. Literally, two. After the snorefest of instrumental introduction 'Perpetual', the first track to feature vocals, 'Dragonfly', is pretty decent melodic metal. At the halfway mark, title track 'Fire And Ice' achieves something utterly absent on the rest of the album - a catchy chorus hook. It's a good track! Sad, then, that the album sags with the preposterousness of 'Forever Is A Long Time', and then takes a swan dive off a bridge with 'I'm My Own Enemy' (never a truer word spoken, etc.) which sounds like the Michael Schenker Group (drunken edition) in slow motion.

It's hard to truly loathe Fire And Ice, however. Much like its creator, it's a bombastic, strutting popinjay of an album, all surface and no depth, but it doesn't try to pretend to be anything it's not. I do want to be a little more charitable, truly. But then I hear a fucking lute on some dog awful shit called 'Golden Dawn', remember that Eddie Van Halen is dead but Malmsteen lives, and that I always have the option of listening to Helloween or Savatage.