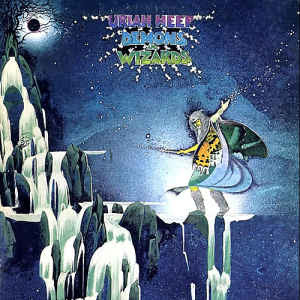 Provenance: Way back when I was at school a friend bought me a triple CD called Metal, the meat of which was split between semi-obscure NWOBHM acts (Vardis, anyone?) and stuff that simply wasn't, er, metal (how Robin George's 'Heartline' made the cut is anyone's guess).

Nonetheless, despite it's rather wonky take on the genre, the compilation featured a smattering of Heep tracks, including 'Easy Livin''. That was enough to get me to shell out a whole nine quid, if I recall rightly, at my local HMV, for the "expanded de-luxe edition" of Demons and Wizards.

And yeah, in case you've twigged, Uriah Heep are next to Uncle Acid & the Deadbeats in my album collection. I'm being lazy.

Review: Last time out I rhapsodised about Uncle Acid's monstrous 'I'll Cut You Down'; and frankly, I could be every bit as emotionally incontinent here about 'Easy Livin'', a song I've also spent more of my life with. It's pure, distilled Heep in the span of around three minutes; Mick Box's buzzy guitar, the late Ken Hensley's strident Hammond organ filling up the sound, and above all else David Byron's ridiculous, brilliant lead vocal. To call it the most heads-down, rocking track on Demons And Wizards feels inadequate. Rather, 'Easy Livin'' bounds out of the speakers with the earnestness and vim of an over-stimulated Labrador.

Back to David Byron for a moment - I've made sport of Deep Purple's Ian Gillan before now for being somewhat hammy in his delivery, but Byron is the whole darned charcuterie board. Whilst an undoubtedly powerful singer, it's so fruity and declamatory that one is minded to think of histrionic old stagers like of Brian Blessed or Christopher Biggins. Given that this is also early-1970s dungeons 'n' dragons rock fayre, the threat that the whole towering souffle will collapse in on itself is very real.

And, hey, it happens - 'Circle of Hands' and 'Paradise' are silly indulgences by anybody's standards, the kind of frothy pretentiousness that infects the minds of guys who want to kick out the jams having read a few pages of The Hobbit. Can you really blame 'em, though? Missteps are inevitable, considering Demons And Wizards was Heep's fourth album in the span of two years. But when it hits, the combination of genuinely top-notch musicianship and fantastical subject matter can be exhilarating.

Por ejemplo, 'Poet's Justice' is a rather underplayed number with a couple of unexpected jazzy chord changes, and 'All My Life', with its slide guitar and honky-tonk piano, could conceivably sit at the admittedly heavier end of the southern rock spectrum; that is, until the utterly bizarre coda. Let's say that some of the vocal contributions from Byron at this point are a little, ah, injudicious. In fact, the song finishes up in a big swell of organ, falsetto backing vocals and Byronic emissions, Heep reverting to type just as you think they've pitched a curveball.

However, 'Rainbow Demon' is absolutely right up there with 'Easy Livin'' as one of the primo cuts from the Heep back catalogue. A prowling, low-key intro mutates into a stomping, insistent muvva of a track which builds towards one of the most volcanic choruses of the era. Here, Heep are toeing a very fine line, as This Is Spinal Tap would have it, between stupid and clever. I'm sure to those plagued by a surfeit of irony, hearing a grown man bellow the words "Rainbow - demon! Pick up your heart and run!" is funny (NB: it is), but if you can tune yourself into the peculiarities of the era a rich experience awaits.

Now, normally I don't delve into the bonus tracks, but one called 'Why' merits special mention. One thing that Demons And Wizards emphatically isn't is groovy; even the boogie passages of 'The Spell' are quite clunky. However, on 'Why', Heep go from a band that can't locate a pocket on Batman's utility keks to playing some truly sinuous funk rock. I don't really know the history of this track (I believe it's a b-side) but it truly warrants more exposure, even if it does feature a mid-section containing the usual melange of freneticism that Heep conflate with rocking out.

In spite - or maybe, because - of its obvious flaws, Demons And Wizards remains an album with high replay value. It's a cracking time capsule of a time where abundant hair, nicotine-yellowed teeth, high voices and cranked organs lit the path to a heavy rock Shambhala. For sure, there's a bit of ring rust and a slight knock in the engine, but this gnarled old warhorse gives the show-ponies a run for their money.