In League With Satan - Venom 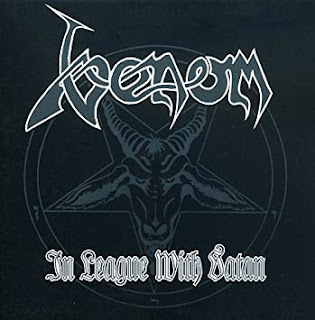 Provenance: A guy at university wouldn't shut up about how important Venom were, so I caved and bought this two disc compilation to see what the fuss is all about.

Review: I guess that listening to In League With Satan brought home to me that importance is a slippery old concept to get a handle on. Venom are, arguably, very important to the development of heavy metal. Musically they influenced the nascent thrash scene, but on a more wholesale level could be said to have birthed black metal. Venom synthesised a host of their own influences - punk, heavy metal, Satanism, Amicus horror movies - into the fundaments of black metal, aesthetically, stylistically and thematically.

Venom were also, on the basis of this compilation, spectacularly awful.

It begs the question - just because an artist heralds a new movement within a genre, do we still need to listen to them? This, after all, was my imperative to check out Venom in the first place. I have no real l33t or kvlt credentials to my name (if we exclude In League With Satan I own perhaps three black metal albums) so maybe I am entirely the wrong person to attempt to peer through the auditory fog to try and identify what the chin-strokers see in tracks such as 'One Thousand Days in Sodom', 'The Seven Gates of Hell' and, perhaps the best title in metal history, 'Aaaaarghhh'; but to those who do tread along the Shining Path set out by the Lord of Lies, surely this also sounds like dogshit?

Yet there are people out there who love Venom. I recall waiting in line to see My Ruin at the Cavern in Exeter (what memories!) and falling into conversation with a chap in the queue. What started off as a fairly genial chat about rollercoasters descended to the point where he threw a punch at me (which I dodged, utilising a 'Drunken Master' defence style (NB: I was drunk)) because I made fun of Venom. More specifically, I made fun of the shrine to Venom he had set up in his flat, but the point remains - I may see Venom as heavy metal clowns, but my erstwhile opponent saw them as important enough to, perhaps, offer sacrifices in their name.

Despite my personal opinion that In League With Satan is a buffoonish parade of the ripest incompetence, I'll at least try to pay dues where earned. Black Sabbath and Led Zeppelin flirted with Satanism, but Venom really go all out - they are the bogeymen that housewives clutching their pearls to Kiss worried about. That in itself is quite fun, though if I were Old Nick, and this was the music I was allotted in the late twentieth century, I would go back to tuning guitars at the crossroads. The music itself does push towards what were the extremes of speed and volume at the time, but without the whipcrack discipline of Motorhead it often descends into a churning heavy metal gazpacho, which has its own strange charm. Bassist and "singer" Cronos is either a bonehead or the most mordant wit in the game; either way, his dumbass lyrics, when discernible, are entertaining enough.

I don't really know what else to say. There's a link between the production values on the material from first album Welcome To Hell (music journalist Geoff Barton memorably said it possessed the "hi-fi dynamics of a fifty year-old pizza", but went on to give it five stars) and the lo-fi approach cultivated by many subsequent black metallers, for sure. It's as if studio polish and distinct separation of instruments are part of the realm of fakery, representing yet another branch of metal's oddly explicit obsession with authenticity (think Manowar's 'All Men Play On Ten' and 'Death To False Metal', or the graphics in Nitro's O.F.R. release that suggested that not only were keyboards not used but moreover were entirely banned from the recording process altogether). Abhorrence towards sounding good seems rather precious and faintly ridiculous (to this Steely Dan fan, hyuk hyuk), but here again, I am almost definitely missing the point. You want to sound ugly, brutal and antisocial.

But do you want to to sound stupid?

Nonetheless, In League With Satan represents a triumph, of sorts. Venom found a sound and a look that stood out; they found a sympathetic label in Neat Records, also from the north-east of England, who championed their local scene, putting out landmark releases by bands such as Raven, Jaguar and Blitzkrieg. They rode that horse all the way home, smoke-bombing stages around the world to the strains of 'Genocide', 'Satanarchist', and 'Blood Lust', and gave a lot of angry Norwegian kids a blueprint for their own creative efforts. Not all bad, then...?
Posted by AC at 08:21